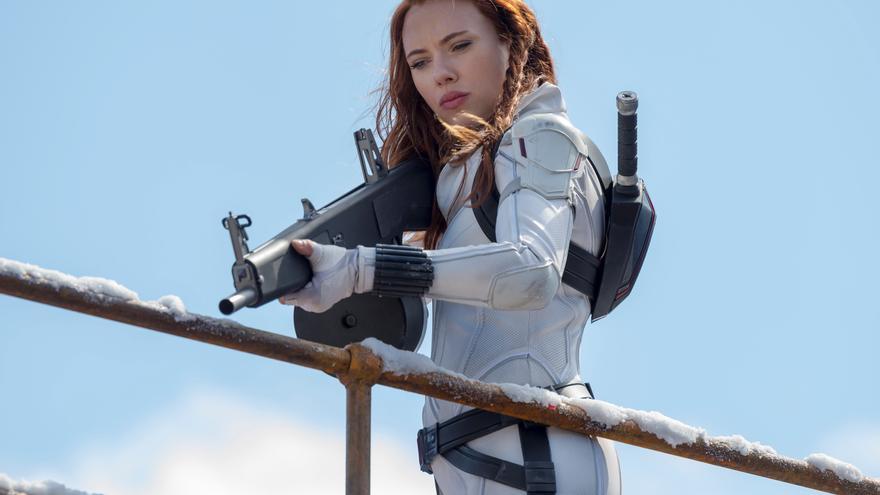 Few dare to stand up this week on the billboard to the expected ‘Black Widow’ incarnated by Scarlett Johansson, except Santiago Segura who hopes to repeat the blockbuster with his new comedy ‘A todo tren’ or the combative ‘Miss Marx’, biopic of the daughter of the author of ‘Capital’.

After postponing its launch numerous times for the pandemic, ‘Black widow‘will be released in cinemas and Disney + at the same time and will be the first Marvel film to hit the big screen after the coronavirus hiatus. It will mean Scarlett Johansson’s final farewell from the character.

With Cate Shortland as director and Florence Pugh, Rachel Weisz and David Harbor Escorting Johansson in the cast, the film investigates the origin of Black Widow by exploring the traumas of a spy from the Soviet bloc who ended up fighting for the Avengers in the United States.

After establishing itself in 2020 in the great savior of the Spanish cinema box office, despite the restrictions of the pandemic, with the sequel of ‘Father there is only one’, Santiago Segura returns to the attack with ‘A todo tren, destino Asturias’, a comedy that he directs and stars alongside Leo Harlem, Florentino Fernández or David Guapo, among others.

Adaptation of a French film, the story revolves around a father and grandfather who are commissioned to take a group of children to a Summer Camp, but they get confused when the train starts taking the children while they stay on the platform, which is the beginning of an adventure to try to get them back.

“Miss Marx” is a portrait of Eleanor ‘Tussy’ Marx, the youngest daughter of the father of communism and theorist of historical materialism, a brilliant, intelligent, passionate and free woman and one of the first feminists to carry on the legacy of her father and her partner Engels.

Directed by Susanna nichiarelli (‘Nico, 1988′) and starring Romola Garai, the film focuses on Eleanor’s public life, her fight for workers’ rights, for the abolition of child labor and women’s rights, and also on the private and in his attraction to the unbridled and conceited Edward Aveling who turns everything he stands upside down.

Kiyoshi Kurosawa, Director of ‘Cure’, ‘Tokyo Sonata’, ‘Kairo (Pulse)’ or ‘Bright Future’, returns with this film set in World War II and which won the Silver Lion for best director at the last Venice Film Festival.

Co-written by Ryusuke Hamaguchi, director of the acclaimed ‘Happy Hour’, It starts the night before the outbreak of war, when the local merchant Yusaku Fukuhara leaves his wife Satoko at home and travels to Manchuria with his nephew; There, he is a casual witness to a barbarous act and decides to take steps to reveal it to the world.

Russian director Andrey Konchalovsky, who has alternated auteur cinema in his career with Hollywood films such as’Tango and Cash ‘or’ Runaway train ‘, won the special jury prize at the Venice Film Festival with this film with the ambition of a documentary about the repression of the Soviet army in a Caucasian city.

The massacre in the Soviet city of Novocherkassk It took place in 1962, when the army fired on a strike by workers of one of the main locomotive companies in the communist country.

It reaches Netflix the second installment of the horror trilogy based on the novels of de RL Stine, set in 1978. College has ended in Shadyside and summer activities are about to begin, but when to another “shadysider“The need to kill possesses him, fun in the sun turns into a terrible struggle to survive.

The Argentinian Francisco D’Eufemia sign this western crime thriller with Rodrigo De la Serna (‘Motorcycle Diaries’, ‘One Hundred Years of Forgiveness’, ‘The Paper House’) as a game ranger who discovers a network of poachers.

Pablo Silva, temporarily assigned to the detachment of the Pereyra Iraola Park, finds a wounded fox in a cage one morning, heals it and feeds it. His trail leads him to a gang of poachers operating within the reserve.

Family drama starring Geoffrey Rush, who gives life to a successful businessman, now retired, who remembers for his granddaughter, very concerned about the environment, his childhood in a wild area of ​​the coast of Australia.