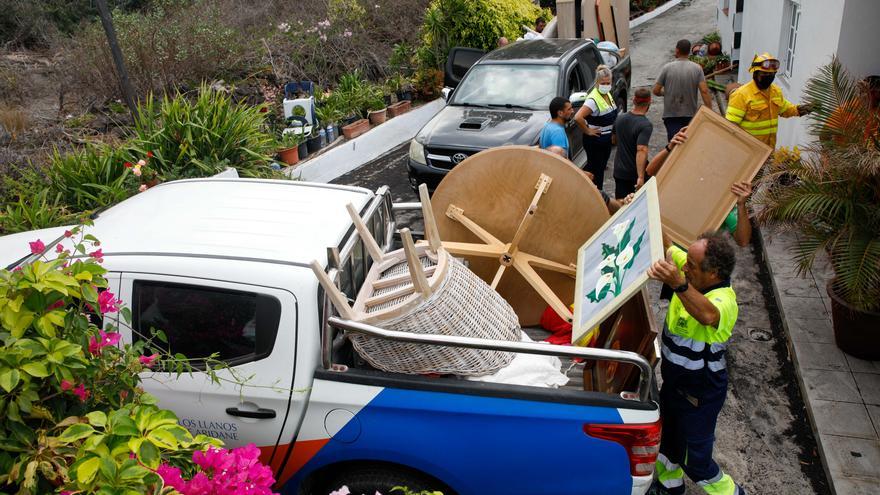 The City Council workers loaded into trucks all the furniture that they could extract from the interior of the temple. Virgins, crucifixes, candelabra and paintings from the parish of San Pío X, in the municipality of Todoque, were other evacuees on La Palma, moving to a safe place. “Well, to an area considered safe or semi-safe,” clarifies Alberto Hernández, the 40-year-old priest who was in charge of directing the shipment of objects to the nearest parish. A day later, the inevitable. The river of lava reached the neighborhood in the afternoon.

They scooped up whatever they could, wrapped it up, boxed it up, and loaded it onto trucks in a hurry, fleeing the lava. Right now, the sacred objects rest in the parish of San Isidro, in La Laguna, and large furniture, such as banks, have been deposited in warehouses of the City Council itself.

“We collected virgins, pictures, benches, chalices, ornaments. Nothing was going out in the open,” highlights the parish priest on the other side of the phone. His voice sounds tired. “We took clothes, the tablecloths from the altar. Everything that could be rescued by opening a drawer. The altarpiece, logically, could not be done,” he laments.

The removal of all these objects occurred this Monday around five in the afternoon. Before, there had been moments of anguish due to uncertainty. “With the help of the parishioners who came, we collected what was possible. After the arrival of the mayor, the councilors and the City Council workers expedited the process,” he says.

At the moment they are focused on relocating the sacred objects, but they do not stop thinking about returning to normality. “Now I am placing everything in the parish halls and, if it is needed later for catechesis, we will see.” Alberto tries to give “meaning” and “dignity” to the elements in their new location for when the parishioners come. Now everything “is tears and a lot of helplessness.”

With the faithful dispersed by the evacuations, the priest is already waiting for the weekend to arrive. “If the volcano allows it, we can celebrate a liturgy.” But this will have to be in another place, outside the security perimeter marked by the authorities. “If there is no danger and an indication against the authorities, my intention is to give mass in the parish of San Isidro at the usual times,” reports the priest.

“Unfortunately, the lava will pass through here,” Alberto predicted this Monday.. The parish is on a promontory, which could do the miracle and save it from the fire. “It will depend on how much the laundry is opened,” calculates the priest. “He could dodge her. But he behaves in a capricious way.” The parish priest assures that he is concerned about his temple, but more so on the day when “people can return to their homes” to verify that “they do not exist.”