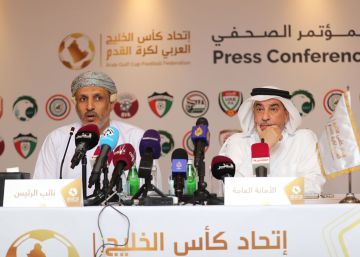 Soccer is also political. The announcement this Wednesday that Saudi Arabia, United Arab Emirates (UAE) and Bahrain they will participate in the Gulf Cup points towards a thaw with Qatar, host country of the championship to which its neighbors submit to a diplomatic and commercial boycott since June 2017. For now, the host has already delayed the start of the tournament a couple of days, until November 26, to accommodate all three teams. And if all goes well, you may open the door to lift your veto at 2022 World Cup.

The Gulf Cup, originally scheduled from November 24 to December 6, also brings together the teams cited to those in Kuwait, Oman, Iraq and Yemen. The news seems to indicate a de-escalation, but it is not clear whether the participation of boycott countries also includes their fans traveling to Qatar.

The interruption of relations with Doha led by Riyadh and Abu Dhabi (and also followed by Bahrain and Egypt) has translated during these two long years into an interruption of air communications and the ban on their nationals from traveling to the country with the highest per capita income in the world, thanks to its huge gas reserves. The level of animosity has led to incidents such as a British being detained in the Emirates for go to a match with a jersey of the Qatar national team.

Last year, Saudi Arabia and the Emirates authorized their football clubs to go to Doha to play against their Qatari rivals in the Asian championships, instead of facing each other in neutral fields. However, the permit was not extended to fans. When in the semifinal of the Asian Cup, the Qatari national team humiliated Emirates with a 4-0 They barely received the applause of a handful of foreigners. A few days later, when facing Japan in the final, even the Emirati authorities avoided going: if they had won again, nobody wanted to go out in a photo giving him the prize.

Local analysts interpret the decision to participate in the Gulf Cup as a political measure that announces major advances. The sign shows that the diplomatic efforts of the emir of Kuwait, Sheikh Sabah al Ahmad al Jaber al Sabah, are beginning to produce results. Mention is also made of the participation of the Qatari Prime Minister at the Mecca summit last May or the recent meeting of Interior Ministers of the Gulf in Oman. However, it is not clear if all this will lead to an agreement to end the dispute, or simply to recalibrate the crisis.

Qatar, which has always denied accusations that it supports terrorism launched by its rivals, has managed to emerge relatively airy of the economic impact of the boycott. Count on the third largest gas reserves in the world (and barely 300,000 native inhabitants) has certainly helped cushion the effects. However, before the 2022 World Cup, Doha would like to have open airspace and the assistance of its neighbors again.

Saudi sources have recently leaked that Doha has taken some "encouraging steps" towards resolving the crisis. However, the real change in attitude is taking place in Saudi Arabia. Before the impending IPO of Aramco, his national oil company, the Saudi heir, Mohamed Bin Salman, is trying to close the conflicts that overshadow the political stability of the kingdom and the dispute with Qatar is one of them. In recent months it has also intensified its efforts to end the Yemen War, and has sought to project a friendlier image of the country through sporting events such as the Spanish Super Cup.