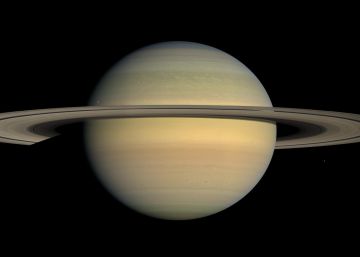 Saturn, the sixth planet of Solar System, It has 20 satellites that until now were unknown, which brings the number of those who orbit this planet to 82 and with what removes the supremacy to Jupiter and its 79 moons. The announcement of the discovery of the new satellites was made Monday by the Center for Minor Planets, dependent on the International Astronomical Union (UAI), after the Subaru telescope, located on the top of Mount Mauna Kea in Hawaii (United States), made the discovery. The newcomers are small satellites with an average of five kilometers in diameter, of which 17 orbit Saturn backwards, that is, in the opposite direction towards which the planet rotates on its axis, and the rest in it.

"The study of the orbits of these moons can reveal their origins, as well as provide information about the surrounding conditions to Saturn at the time of its formation, "said Scott Shepppard, director of the team that made the discovery. The moons closest to Saturn and turning in the same direction, it takes two years to orbit the planet, while the furthest takes more than three years with its opposite movement. Experts do not rule out that all these satellites are fragments of what at one time were larger moons, according to a statement from the Carnegie Institute of Washington. In fact, according to Sheppard, "this type of group of exterior moons they are also seen around Jupiter, indicating violent collisions between moons in the Saturn system or with outer objects such as asteroids or comets. "

When the Solar System was young, the Sun was surrounded by a disk rotating gas and dust from which the planets were born. It is believed – he added the expert – that a similar structure "surrounded Saturn during his training". The fact that this new moons were able to continue orbiting Saturn once the older satellites from which they came were broken indicates that those collisions occurred after the formation process of the planet was almost complete and the discs that characterize the planet had no influence, the statement said. Now the new 20 moons discovered need to be baptized. In this regard, lThe researchers have decided to involve, once again, the public in choosing the name for these newly known satellites, with the condition that these refer to mythology giants Nordic, gala or Inuit.