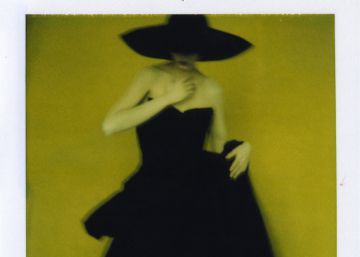 Photography is a fiction for Sarah moon, (Vernon, France, 1941), “an echo of the world” where a rare and evocative beauty resounds built on the basis of innuendo; a window through which he has unleashed a poetic imaginary that oscillates between the visible and the invisible. “I often envy those who know how to photograph life. I dodge it, ”says the French artist, who distanced fashion photography from the clichés created by the male gaze. “I start from scratch. I make up a story that remains untold. I imagine a situation that does not exist, I erase a space to invent another, I change the light, I make it unreal and then I try. Attentive to the unexpected, I hope to see what I do not remember, I undo what I joined, I trust luck, but more than anything else, I long for the thrill of the shot ”.

A renovator of fashion photography, for more than three decades she has been shaping a personal work through photography, video and also film. A universe where time is continuous, the past merges with the present, sensing the future, and to which it opens the doors PasséPrésent, the exposure that the Museum of Modern Art in Paris dedicated to the artist. Away from any chronological approach, the exhibition intertwines themes, techniques and stages using as a common thread a selection of the films made by Moon. It also includes as an appendix a room dedicated to the relevant figure of the editor Robert Delpire (1926-2017), highlighting his influence on the life of the author with whom he was a couple for five decades.

His first portraits were made in London in 1968. Of Jewish origin, he arrived in the British capital with his family fleeing from a France occupied by the Nazis. At that time she was a model, and had posed for Guy Bourdin, Helmut Newton or Irving Penn. So while the swinging sixties They were coming to an end and tired of lending her body to the camera, she decided to observe the world from the other side of the viewfinder. She left her real name behind, Marielle Hadengue, when she started working for the firms Biba Y Cacharel, ready to free women from the prevailing masculine gaze that showed her as an object of desire. Photographers Lillian Bassman and Deborah Turbeville they accompanied her in her endeavor.

His photographic language began to distance itself from codified glamor and from all clichés; ethereal bodies, elusive glances that resist being totally defined by the viewer, lost in a melancholic and romantic atmosphere that evoke dreamlike versions of reality with clear pictorial overtones. Hence, her work has been described as an enigma interpreted from nostalgia. "What is nostalgia?", The writer Dominique Eddé asks the artist in one of the texts in the catalog of the exhibition. “It is the dream of anything that does not exist. It is the dream of a dream ”.

The turning point in his artistic career occurred in 1985, after the death of his assistant Mike Yacel. Her name was already a benchmark in the world of fashion when she began to focus on her personal projects, dedicated to a solo task, freer and more unpredictable. In this way he established two lines of work that, although they obey separate processes, their division is porous. "The contagions between these two image regimes continue to enrich the issues raised by Sarah Moon's photographs," says Schulmam.

Urban landscapes, clocks that seem to have stopped ticking, animals, strange creatures, plants and beautiful women wrapped in flowing dresses, Little Red Riding Hood poses in the city behind an imaginary forest. A child runs in terror before being captured. All this configures a dream world. Fleeting moments, also of nightmare and restlessness, wrapped in an aura of mystery. "At the heart of the drama of your photos there is a great enigma", writes the photographer Duane Michals to the artist.

Self-taught as a photographer, she learned to appreciate photography in the cinema, where she spent so many hours of her childhood and youth. “The aesthetic influences of the Soviet Sergei Eisenstein, as well as the Germans GW Bast, Carl Theodor Dreyer and FW Murnau are appreciated. From them she learned to play with strangeness ”, highlights the curator. “Her search for beauty is parallel to a depth that connects with disappearance and also with death. Beauty is something very evanescent that can also be found in the shadows ”. In the sample the use of black and white predominates, which he describes as the color of memory.

The aesthetics of the accident pursued by the author is already observed in some Victorian photographers such as Julia Margaret Cameron. A search strongly rejected then for being the success of an error and that would become part of the vocabulary of avant-garde photography from the beginning of the 20th century. "I have always liked pictorialism, I have been criticized a lot for it, but the photographers that I really liked were Robert Frank, Diane Arbus and Henri Cartier-Bresson," the photographer assured in a conversation with Quentin Bajac. The curator and photography expert observes in this tendency to look back on the author not "the expression of a nostalgia for the past, but rather a formal laboratory of wealth hitherto unsuspected".

Thus, the alterations created from the negatives of the Polaroid camera: scratches, fingerprints and stains, together with the blurring contribute to the image becoming distant from reality. The materiality of the photograph seems more alive and visible while making it difficult for the viewer to place it in a specific time. "Moon seeks to capture a moment that is absolutely out of time, that is timeless," says the curator. “Added to this is the fact that some of the images have not been intentionally fixed, so that they are being progressively erased by time and light. The issue of the disappearance of the image is at the heart of her search ”.

He began working in film in the late eighties. Mississippi One (1991) would be his first feature film. His career ranges from fiction to documentary film. Each section of the exhibition revolves around a projection of the versions of the stories by Charles Perrault and Hans Christian Andersen that the author has adapted within a current context, including red Riding Hood (Le chaperon noir, 2010) and Blue Beard (I fil rouge, 2006). These adaptations acquire a quite dramatic tone that alludes to the difficult accommodation of children to the adult world. "When making films, Sarah Moon chooses stories that everyone knows, except her," writes actor and screenwriter Jean-Claude Carrière in the catalog. "At least that's the impression she gives, she discovers them by showing them to us. In any case, she discovers what essential. His way of showing, that is, of seeing, is his […] Yes, in Sarah Moon films you could almost say that you have to look at what you don't see. This is one of their secrets ”.