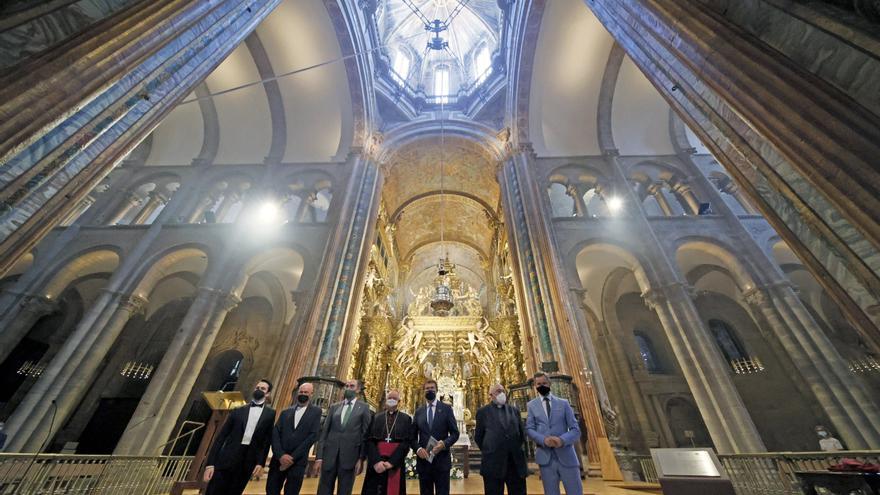 Santiago de Compostela, Jul 9 (EFE) .- The cathedral of Santiago de Compostela has released a new interior lighting this afternoon, with the installation of 700 lights, which improves energy efficiency by 61% compared to the previous one and avoids the emission to the atmosphere of 6.7 tons of CO2 per year.

This was revealed during the act to premiere this lighting, which has a total power of 15.8 kilowatts, developed by the energy company Iberdrola and which coincides with the celebration of the double Jacobean year 2021-2022 with a “renewed intensity” from its “most emblematic epicenter”, according to the president of the Xunta, Alberto Núñez Feijóo.

The president of Iberdrola, Ignacio Galán; the Archbishop of Santiago, Julián Barrio Barrio; and the mayor of Compostela, Xosé Sánchez Bugallo.

Galán highlighted that the cathedral lighting is the result of “blending art and culture with innovation”, with unique elements such as the 36 new lamps, inspired by the old votive lamps of the cathedral and designed exclusively for this project.

These lamps suspended in the central nave and transepts, recover the lighting of centuries in which the temple was lit with candles and are equipped with the latest lighting technology, as they have 12 LED emitters each and are powered directly from their own cables that anchor them to the ceiling and keep them suspended.

For this reason, Feijóo has indicated that this project is based on three key precepts such as “commitment to sustainability, respect for religiosity and cultural development”, with a system that develops all the aesthetic potential of the temple “without replacing natural light “.

He added that this “biannual xacobeo” is a “luminous call” that Galicia directs to all the peoples of the world to “come to Compostela” because the holy year is the “progressive overcoming of the pandemic and the moment to leave the stage behind most difficult of the most important path: that of health “.

In this sense, he stressed that the authorities will “take even more precautions” to guarantee the safety and health of people.

Núñez Feijóo has put in value the 24 million euros invested in the restoration of the Compostela cathedral in “one of the largest conservation efforts in the recent history of our country.”

An effort that, as he has pointed out, will have continuity in the 2021-2027 cathedral plan to preserve the five great cathedrals of the community, the old cathedral of San Martiño de Mondoñedo and the two cathedrals of Vigo and Ferrol.

For his part, Galán said that the company has carried out these works “with the same enthusiasm and commitment” with Galicia and “promoting the energy transition, industrial development and the generation of sustainable and quality employment”, with an economic impact that exceeds 400 million euros a year between investments, purchases, salaries and tax contribution.

In addition, it has had a special mention of floating offshore wind energy with a “pioneering investment” on the Galician coast, which plans to make Galicia a “world benchmark” in this technology, he predicted.

The architect responsible for the lighting project, Ignacio Valero, and the archbishop of Santiago also took part in the event, who has referred to the new lighting system “as the culmination of a long and profound process of the Compostela cathedral.”

The Mayor of Santiago de Compostela has proclaimed that “Galicia shines today more than ever and the Cathedral of Santiago as well”.