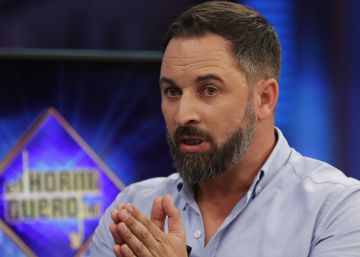 4,049,000 spectators followed on Thursday night the visit of Santiago Abascal to The anthill. The appearance of the leader of Vox, candidate for the presidency of the Government in the next general elections of November 10, in the Antena 3 program thus marks the third best historical data of the space in number of spectators only behind Isabel Pantoja (4,783,000 viewers in January 2017) and Bertín Osborne (4,172,000 in November 2015). It has also been the best data of the new season. No other visit has exceeded the number of four million viewers.

The screen share reached an excellent 23.5%, second best data (the winner of the night in Compartir at prime time it was, once again, GH VIP, with 35.6%, 3,629,000 spectators; also maximum of the season). Thursday's golden minute was in The anthill. At 22.49, 4,787,000 viewers (and a 27.8% share) were pending the interview with the Vox leader. The expectation for the program also produced that the news of Antena 3, issued earlier, also marked his season record.

The announcement of Abascal's visit to the space presented by Pablo Motos angered many people on social networks and during Thursday there was a movement on Twitter calling for the boycott of the program. At the beginning of the program, Motos defended the presence of Abascal: "As we do not marry anyone, we want to test the strength of ideas." The anthill He has invited the main candidates of the next elections, all of them already with a parliamentary presence.

Abascal joked with Motos about this controversy: "I was worried about you, so they will shake you from now on. I have brought you anti-inflammatories." In the interview, Motos and Abascal talked about issues such as abortion, euthanasia, sexist violence, immigration, the LGTBI collective or Franco.

The most awarded series in the history of the Emmy

Anecdotes and curiosities of the Emmy Awards