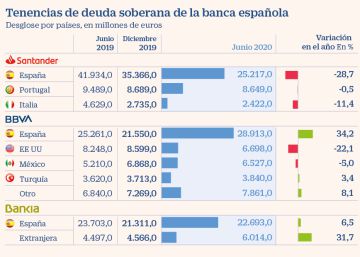 Spanish banks are fattening their sovereign debt portfolio once again since the pandemic began, with one notable exception. Santander is moving against the tide and, far from having taken advantage of the rise in yields that occurred in March or the subsequent rally with which to accumulate capital gains thanks to the intervention of central banks, it has cut its sovereign risk on the balance sheet accordingly. drastic. In the first half of the year, its holdings of Spanish sovereign debt fell by 10,150 million euros, according to data registered with the CNMV.

“These are portfolio sales within the framework of balance sheet management and management of exposure to interest rate risk,” as explained by the entity. Thus, its holding of Spanish public debt has suffered a sharp fall of 28.7% in the semester, to a total of 25,217 million euros. The bank prolongs the divestments it already made in the second half of 2019, so that its Spanish bond portfolio has decreased by 40% in the last year.

In June of last year, Santander was, in fact, the Spanish entity with the highest national sovereign risk on balance sheet, for almost 42,000 million euros. It started selling despite the fact that yields began to rise then from historical lows – the 10-year bond touched 0% in August of last year – and that it was in March when the great opportunity opened for the sector of squeeze out the income stream from investing in debt. The rise in yields ensures a higher coupon for the bonds in the portfolio and the subsequent fall in yields, more capital gains thanks to the rise in the prices of these assets.

The sales of Spanish sovereign debt have in fact been reflected in Santander’s income statement. The entity acknowledges that the decrease in the net interest margin in the first semester is due, among other causes, to the lower volume of the debt portfolio, in addition to the lower interest rates.

Santander’s baton is now taken by CaixaBank, at the head of the bank both due to the size of its portfolio of Spanish public debt and the intensity of the increase registered so far this year. At the end of June, its holdings of Spanish sovereign debt had grown 36.7% compared to December, to 44,991 million euros. The entity started from a relatively low level at the end of 2019, after having reduced its Spanish debt portfolio by 13% during the second half of last year. And he took advantage of the increase in returns at the beginning of the pandemic to increase positions, without now having an urgency to modify the size of the portfolio.

With the exception of Santander, Spanish banks have started the reverse path in recent years to that of recent years, in which they have reduced their sovereign risk on the balance sheet while at the same time recording juicy capital gains. Its portfolio of sovereign bonds soared in the previous crisis, when the high yields and high liquidity offered by the ECB made the bank a fundamental buyer for the Treasury and key to financing the State.

The sector thus arrives at the current crisis with a reduced debt portfolio, in general terms, and therefore with room to increase it. At the end of May, the financial sector as a whole had already raised its holdings of Spanish sovereign debt to highs in December 2016, with a volume of 170,154 million euros.

Although focused on giving credit, the enormous injection of TLTRO III liquidity from the ECB, for 1.3 trillion to all banks, is also an opportunity for the sector to acquire bonds.