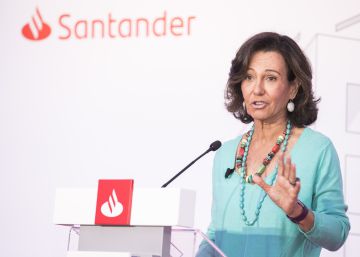 Santander Bank prepares a change in draft in the way it controls its asset management segment, which includes both its own manager and private banking and insurance areas. Until now, the entity chaired by Ana Botín retained control of these divisions through two holdings, both domiciled in British territory. The plan is to break all links between these divisions and British societies. And that depend directly on companies based in Spain.

Santander recently informed the CNMV that it has terminated the company SAM UK Investment Holdings Limited, which is based in London. The origin of this company dates back to 2013, when the bank sold 50% of its fund manager to venture capital funds Warburg Pincus and General Atlantic. He then created a company, dominated in the United Kingdom, so that both the bank and the new shareholders controlled with it their participation

Frustrated an attempt to merge with Pioneer, the bank decided to buy back its participation in 2016. And control 100% of the manager when acquiring all the shares of that company that he created three years ago and now eliminates. Between this now extinct British company and each of the 10 national managers – which will remain independent – Santander had a second holding company, SAM Investment Holdings Limited, which will now be the company that groups the entire asset management business.

This company is domiciled in Jersey, an island of the English Channel administratively linked to the United Kingdom and considered by several international organizations as a tax haven. The manager operates in Spain and in other countries where it is present as a branch of this English parent company. However, the bank also wants to break the links of this company with this British territory.

According to the 2018 accounts of the branch in Spain of this company, deposited in the Mercantile Registry, it has already moved its fiscal headquarters to Spain and reports to the homeland Tax Agency since April 1, 2018. In this same document It is also explained that in the last two years he has promoted the transfer of most of his staff and senior management. As the culmination of this process, the company also plans to move its registered office to Spain and stop operating as a branch.

This process coincides over time with the three and a half years in which London and Brussels have negotiated the United Kingdom’s exit from the European Union. Finally, the divorce will be consummated this Friday at midnight, although the parties have established a transitional period until December in which neither the citizens nor the companies nor the financial institutions will feel the consequences of the separation.

Santander AM sources unlink these corporate movements from the bank’s strategy to protect against Brexit. They indicate that it is the last link in the process that began in 2016 with the purchase by the bank of 100% of the manager.

However, this strategy of separating their business in Spain from their headquarters in the City of London is a strategy that many other foreign banks and funds have already followed. As published by CincoDías, Nomura, Citi or Morgan Stanley have opened subsidiaries in various EU cities regardless of what they already had in London. And, through them, they have opened new branches in Spain to shield themselves in case of hard Brexit.