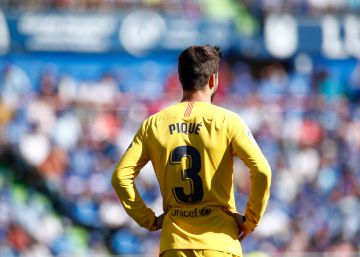 The template of Barça each victory is charged since the directive discounts all defeats, an unsigned pact and, however, understood by both parties. The fall of Anfield precipitated the events and the accounts are no longer adjusted at the end of the season with the recount of the titles, but are passed at the end of the matches, as seen in Getafe.

Pique, one of the captains, the most direct, appeared after the triumph, the first of the season in a foreign field, and pointed to the presiding council Bartomeu. "We have to be all together and when I say everyone includes the fans and the board, keep the club together, because if we do not hurt," said Piqué.

The plant, which already appealed to the unit in Pamplona, ​​was more specific in Getafe. “We know the club, we know the newspapers that are related to it, we know the articles that come out and many times we know who writes them, even if someone else signs them. We don't want to get angry, we want to give up and win. Hopefully nobody tries to cause fights, ”Piqué continued.

Although he omitted the names, the defense was probably referring to the article that was written on Wednesday by journalist Xavier Bosch, partner of Barça 1463, in Sports world: This is how Barça's wardrobe got all the power. The text included an inventory of the concessions to the players for winning “what had never been won” in the last decade, up to eight Leagues and three Champions (2009-2019).

Bosch comments on the circumstances of the replacement of Tito Vilanova, the clemency of Luis Enrique to avoid sanctions after the Anoeta crisis in 2015, the inquisition of the locker room with the manager Pep Segura and the pleasure with Abidal, the veto to the signing of Iñigo Martínez and the preference for Neymar rather than Griezmann.

"The dressing room itself acts, sometimes as a sports director", it is read later to influence the tip claimed for a friendly in South Africa, the extra bonuses required to win LaLiga, the increase in salary requested or the aid for payments to the Treasury . Even comparative grievances with injuries are cited; Dembéle would be discredited and Umtiti and Luis Suárez would be protected.

The cost would be unsustainable for Bartomeu if not even LaLiga matches are won. The complacency towards the players already induced somehow a motion of censure to Laporta in 2008 and Florentino Pérez resigned as president of Madrid for spoiling the players in 2006. The difference with respect to Bartomeu is that he does not empathize but argues with the team of Messi.

The deterioration of relations threatens even with the patience of Valverde, the only meeting point between the staff and the president, who held the technician against the criteria of a board that has regained influence in the sports field waiting for a director sporty, charge that Puyol rejected. There is no mediator at the moment in the Camp Nou.

The board asks for results after responding to the wishes of the players while urging the coach to renew a changing room that shows signs of fatigue since Berlin 2015. Through the media, equally divided by the conflict, the players know that they are He accuses of a certain laziness and bad habits, of training little and being capricious, and of not corresponding to the generosity of the managers of a club with a budget of 1,047 million.

The tension of treasury caused that in summer some payments to the soccer players were postponed while they were invested - with a credit - 120 million by Griezmann. Some player felt cheated and increased distrust of the board, says Messi interview Sport in which he doubted the negotiations for the signing of Neymar.

The captain himself managed to have a clause in his last renewal by which he can leave the club in June 2020. It has also been explained that Neymar requested in writing that his signing be guaranteed in exchange for withdrawing the lawsuit against Barça. And it is in the public domain that soccer players chat with Bartomeu on terms that are not their own towards a president.

They curse each other for the lack of authority of the board of directors and the power of the team and Aleña even complains about removing the bib for the benefit of De Jong. The misgovernment facilitates self-management in a locker room consented by a directive that sometimes feels untouched and even blackmailed, slave to business decisions: Piqué was the interlocutor of the contract with Rakuten and also the producer of the docmental The decision in which Griezmann reported on his renewal by Atlético.

Griezmann is today at Barça and his incorporation has enlarged the fracture. There is no meeting point in the absence of leadership and there is no choice but to win every day, even after sacrificing the preseason for a double tour, because in 2021 there are elections and Bartomeu, after spending a lot of money, wants to go as a winner and with a successor who is guaranteed the continuity of Messi.