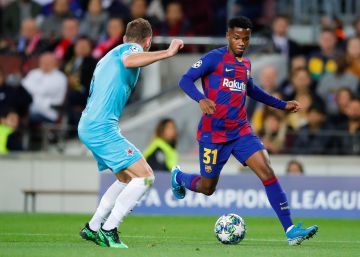 On October 31, Ansu Fati He turned 17. He already has a place in the changing room of the Tito Vilanova field, the home of Barcelona's first team in the Sports City. The protocol says that the kids of the subsidiary who go up to train with the Barca they change in their dressing room and then walk on foot for more than 100 meters that separate the costumes of B from the Tito Vilanova field. Ansu Fati does not, neither does Carles Pérez. The situation of the youth players, however, is different. While Perez, 21, still with a record of the subsidiary, has already played the last two seasons at B, Fati should be at Juvenil A. He knows it and doesn't forget it.

In the two displacements of Barcelona in the Champions League, youth A travels in the charter with the first team to play his UEFA Youth League match. Fati faces the bottom of the plane, a place reserved for the youth players. Nor does anyone miss him when he looks through the Sports City to see the Juvenile meetings or when he goes to Estadi Johan Cruyff to see the subsidiary. And he did not want to miss the presentation of the formative football of Barcelona, ​​on Wednesday. “I liked watching players like Ansu Fati or Carles Pérez, who usually play in the first team,” celebrated the president of Barcelona, ​​Josep Maria Bartomeu.

“These are my classmates and they will continue to be. I spend all day with them and nothing will change for being up there now, ”said Ansu Fati. But there are situations that do change for Fati. After renewing his contract in September until 2022, Barça is already talking about a new renewal for the record squad, who has the mark of being the youngest player to debut in Champions with the Barca shirt and the second rookie in premiere in LaLiga. In the technical secretariat they are clear. "If you have to leave the first team, which we do not have so clear, your place will be in B. It will not play in Juvenile," they explain. If Fati took advantage of the injuries of Messi, Suárez and Dembélé to sneak into the Camp Nou, now he is encouraged to put in check the position of the French, always talented, often lost in the field.

In front of the Slavia Prague, Fati replaced Dembélé. "The other day, which was a close game, you could take advantage of the speed of either one," Valverde explained. The problem for Barça is that the French like to receive the ball at the bottom. "In the end, it was Semedo who broke," added the coach. Until Fati jumped into the field. “I see Ansu better entering the second parts than when he does it from the beginning. That does not mean that I cannot be a starter against Celta, ”Valverde completed. The Guinean-born striker has been in La Masia since he was 10 years old. He understands Barça football, knows how to open the field and, above all, it is understood with Messi.

Before Slavia in the 25 minutes he was in the field he connected five times with the Argentine and gave him a great pass with the outside, which Messi could not define. Griezmann played the 90 minutes. He only met 10 on four occasions. “There is much talk about the connection between Messi and Griezmann and everything is simpler. Antoine is in an adaptation process. It also cost Neymar the first year. He has to get used to the team and the team to him, ”said Valverde, who feels support after the irregular start of the season. “The other day I ate with Bartomeu [president of Barcelona]. In that sense the club has always supported me, ”said Txingurri.

With Suarez touched [yesterday he worked with his teammates and received the medical discharge] and Dembélé in his labyrinth, Ansu Fati is ready for Camp Nou. And that does not forget his teammates of Juvenile A.