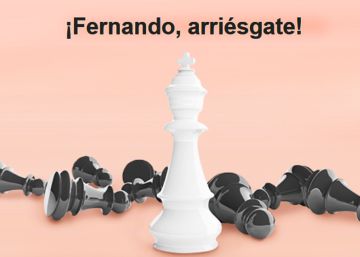 Banco Santander has decided to take action so that its clients achieve profitability in an environment of interest rates on land. Thus, it has launched a campaign through personalized emails with the title “The rules of the investment have changed” in the subject. In communications, he takes risks to earn money. The message is blunt, between exclamations and with the first name of the client to whom the mail is sent. For example, “Fernando, take a chance” (see illustration).

The first phase of the campaign took place just at the beginning of the year, on January 2, as you have learned Five days Thanks to several bank customers. Next to a white king token of the classic chess game, there are several black pawns knocked down around and, below, this message is displayed: “Did you know that, with low interest rates, investment products that until now were profitable Are they no longer attractive? But don’t worry, we tell you how to get a return on your investments. ”

The recipe, according to Santander, is simple: “You just have to follow the basic rules of the investment and incorporate some more risk in your portfolio.” The rules are three. First, “increase the weight of equity assets in your portfolio.” Second, “diversify investment between different types of assets.” And, third, “invests in the medium and long term to minimize movements in the short term.”

The truth is that the average profitability of the deposits up to one year was 0.030% in October, around historical lows. The accounts, also those supposedly of high (italics is not casual) profitability, offer a short 0.032%. Monetary investment funds, considered the safest products because they invest in very short-term fixed-income assets with high credit quality, have registered a return of -0.5% in the last 12 months, according to data from Morningstar

Santander had at the end of 2018, the latest available data of the group, with 19.9 million linked customers worldwide. But only a small part of them have received the email, according to sources of the entity. “It is a communication that only clients with a very specific profile receive, it is not for everyone. It is received by previously profiled customers, ”says a bank spokeswoman.

Santander also argue that this “type of communication that does not have associated any specific sale of products is not understood as advice but as informative.” Therefore, customers who receive it should not have completed, a priori, the so-called suitability test, required when the entity provides advisory services. In the event that the potential investor is interested in the generic proposal that the bank exposes and decides to hire certain products, it will have to pass the corresponding tests, suitability or convenience. Although, it is possible that the entity already has the necessary information to do the screening among its clients without having to explicitly submit them to a questionnaire, the CNMV acknowledges. Of course, the supervisor clarifies that the entity will only offer the products it deems appropriate for each type of customer. “All these communications carry a review process in which both legal advice and compliance review the documentation,” they add.

Minimum profitability, maximum amount. Santander reveals an open secret to one of its clients: deposits, at the time of rates at 0% since March 2016, have a difficult time beating inflation with paid accounts or fixed term impositions. However, families had 842.4 billion euros in demand accounts and time deposits in November, according to data from the Bank of Spain. The figure is close to the record of 844.595 million in June.

Recommended assets. Santander email is linked to an article in a blog of the bank itself entitled “How to look for profitability with low interest rates” in which he decides to look at “higher risk assets”. “The best known are stocks (…), but you can also invest in currencies, commodities, convertible bonds or investment funds, among others,” he says. Last year, the Ibex advanced by 11.8%, but in 2018 it fell by 15% and since the November 2007 record, at 15,945 points, it falls by 40%.