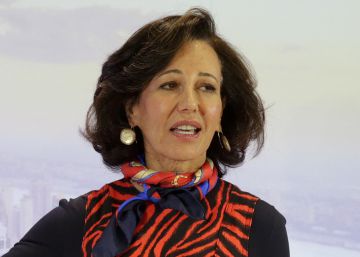 The income statements of the Santander they present a mixture of positive and negative factors. The bank achieved an attributed profit of 6,515 million in 2019, 17% less than in 2018, after charging 1,737 million against the results, of which 1,491 million correspond to the loss of value of its subsidiary in the United Kingdom. This adjustment has been made due to the worsening of the country’s economic expectations and the expected results for the future before the arrival of Brexit.

The rest of the charges are for the restructuring produced by the Santander-Popular merger (864 million), losses from the sale of delinquent real estate portfolios in Spain (405 million) and compensation to British clients for the sale of insurance (183 million).

However, the account has benefited from other positive factors, such as the net capital gain of 693 million obtained by the sale of the custody business, closed in December 2019, and other benefits obtained in Brazil and Argentina of 687 million.

Thus, the ordinary attributed profit in 2019, that is, excluding the net of capital gains and sanitation, was 8,252 million, 2% more (+ 3% in constant euros, that is, without the effect of the exchange rate), “thanks to the greater number of clients and to the growth of the volumes of business “, points the bank in the press release.

The fourth quarter grew above analysts’ expectations, with a 35% increase in the result. The bank plans to keep the same dividend as in 2018, 0.23 euros per share, of which 0.13 will be in cash. This announcement was well received on the Stock Exchange: mid-morning on Wednesday the price rose 3.7%, while the Ibex 35 made it 0.50%.

Brazil is still the star

Brazil not only contributes 2,939 million ordinary profit, but grows 16%, one of the most expansive countries, since Spain has an increase of only 2% “thanks to a greater reduction of expenses of the integration of the Popular”, according to the bank. Brazil has earned more than the sum of Spain and the United Kingdom together. The consumer credit unit earned 1,314 million, up 2%, while the United Kingdom earned 1,077 million, down 16% “due to competitive pressure on revenue.” Mexico achieved 950 million, 19%, and the United States 717 million, a 24% increase, the highest of all countries.

The entity chaired by Ana Botín affirms that Santander obtained a record income, exceeding 49,000 million, 2% more (+ 3% in constant euros), “thanks to the strong growth in customer revenues in America, corporate banking and investment as well as private banking, asset management and insurance, “says the bank.

The number of clients using Internet or mobile banking increased by five million in the last 12 months, to 37 million, that is, 52% of active clients, says the entity. “Digital customers connect to the bank an average of five times a week, which has increased digital sales to 36% of the total. Sales made with the mobile phone doubled in the last 12 months,” he says.

Are squatters protected too much?

The Government will prohibit celebrities from participating in gambling ads