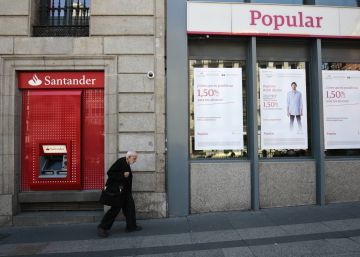 Santander Bank has deducted some 300 million euros in the last payment of the Corporation tax by Popular Bank losses. Last year, another 116 million were already deducted for the same reason, as stated in its annual accounts.

Spanish tax regulations allow Financial institutions record the losses recorded in previous years that could not be deduced. Banks can also activate contributions to pension plans and the huge provisions they made in the crisis to clean up their exposure to brick. They are activated on the balance sheet as deferred tax assets (DTA, acronym for defferred tax assets, in English) and charge them against their own funds, which allowed them to offer better solvency ratios. In reality, these DTAs are collection rights against the Treasury, which the banks are gradually deducting.

When Santander won the Popular for one euro in June 2017, about 450 million deferred tax assets from Banco Popular were also recorded. And you are using them to reduce the payment of taxes.

The bank chaired by Ana Botín paid almost 3.5 billion euros in corporate tax worldwide during the past year. In Spain alone it paid 464 million. This amount "includes 116 million deferred monetizable taxes converted from Banco Popular," the bank acknowledges in its annual report.

The impact of this deduction from Santander is such that the Tax Agency recognizes it in its latest statistical report broadcast last Thursday. He explains that until October he has suffered 1,333 million extraordinary returns. "These are returns linked to deferred tax assets (DTA) and made through compensation of the fractional payment," he says.

Santander specifies that “these are monetizable deferred tax assets from the Popular that became accounts receivable against the Treasury in 2018 and that can be compensated with any tax. That is why we have opted to compensate one part against last year's payment on account, some 116 million, and now another almost 300 million against the corporate tax payment ”.

The application of the Santander millionaire deduction coincides with a decrease in tax collection during last October, the month with the largest tax harvest of the year. "Tax revenues for the month of October amounted to 33,889 million, 4.7% less than in the same month of 2018," explains the Tax Agency. "This decrease was due, fundamentally, to the decrease in the installment payments in the Corporation Tax," he says.

The Treasury recalls that last year there was an exceptional level of income as a result of the abnormally high profit increase in five large groups. The Agency does not specify which groups it refers to. But last year some companies advanced the payment of taxes in fear of a possible rise after the arrival of the PSOE to power. This year, however, these groups are back in focus because, when compared to those revenues, their payments decrease and drag the collection as a whole.

The month of October is one of the most fruitful for corporate tax. It is when the second installment payment occurs, one of the three advances on account of the tax settlement that occurs in July of the following year when the companies submit the declaration. "The second installment payment decreased by about 1.9 billion (13.7%) compared to the same payment last year," says Hacienda. "To understand this sharp decline, it should be remembered that last year the payments had a peculiar evolution, decisively influenced by the behavior of five large groups that pay all of them according to the minimum payment. These groups declared few benefits in the first payment and a abnormally high amount in the second, which resulted in a very high level of income in October 2018 that more than compensated for the poor results of the first payment.This year, when comparing with that period, there is a significant decrease in the income in those five large groups (2,245 million), "he insists.