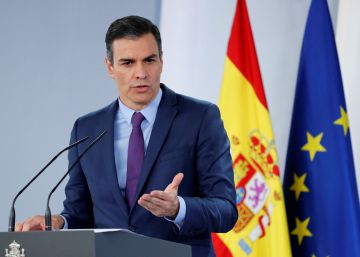 “The recovery requires, in addition to the European agreement, a new budgetary agreement and for this reason I call on all political forces to put their shoulders close, so that in this next semester we can approve new Budgets”, which allow for the social and economic reconstruction of the country after the pandemic with the support of community funds. This was expressed this Tuesday by the Prime Minister, Pedro Sánchez, in his last appearance of the political course after the Council of Ministers, where he has made a balance of the management of the last months marked by the coronavirus health crisis.

In this sense, Sánchez assured that “it is the government’s task to prepare new General State Budgets (PGE) but it is also the responsibility of all political forces to make the necessary contributions to guarantee their approval.” In fact, it had an impact on the impossibility of facing the economic and social emergency caused by Covid-19 with the 2018 public accounts, since with them, it would not be possible to take advantage of European aid, which will allow Spain to have up to 140,000 million euros (half in direct transfers).

Thus, when linking European funds with Spanish public accounts, the words of the Chief Executive suggest the need to reach a budget pact with all political forces that lasts more than one year.

Sánchez reiterated that after the harshest moments of the pandemic, which led to the stoppage of activity and home confinement, the economic recovery has already begun and will continue during 2021, to accelerate in 2022 thanks to EU aid. In 2023, he assured that the situation “will be exceeded”, since the economy will be “in better shape” and will revolve around “digitization, sustainability and territorial cohesion”. In this way, the president assured that it is “imperative” to have new Budgets, for which he will not “throw in the towel” and intends to speak with the representatives of all the groups.

“There is no capacity limit, all parties are welcome,” he said, calling for the right wing of parliament to cooperate as well, despite the fact that its coalition partners do not welcome the approach that the PSOE has maintained with Citizens in the last months. The latest example of this was on Monday, when both formations met to evaluate and agree on anti-crisis measures. The purple ones urge to keep the majority of the investiture, denying the possibility that the orange formation of its approval to a progressive accounts.

Faced with this recent scuffle, Sánchez clarified at all times in his appearance that he was “frankly satisfied with the coalition government”, after highlighting that it has faced the greatest health emergency of the last hundred years, for which it has become the largest mobilization of resources of history: 200,000 million euros, in sanitary, economic and social measures.

He also highlighted that of the 428 commitments of the coalition government pact, more than 55% have already been activated and he hopes that in one year almost a fifth of the legislature’s agreements have been fully achieved despite extraordinary circumstances of these months. According to the forecasts made by this coalition pact, by the end of 2021, 100% of these commitments will be activated and they will close 2023 “having fully completed 90% of the objectives set.” The remaining ten percent, explained the president, will require a longer period “for its full execution.”

Precisely in that coalition agreement, the commitment to repeal the most damaging aspects of the 2012 labor reform is included, a measure that Sánchez did not name on Tuesday when listing the next measures that the Government will implement to reactivate the economy and that being When asked about it, he only said that it will be done “within the framework of social dialogue.” In this way, although it does not expressly renounce the controversial counter-reform, it does not contemplate it in the short term, which would attract the support of the more conservative parties, such as the PP.

Another wink that is closer to this training, as well as to Citizens, is the intention of the Executive to undertake a “structural” fiscal reform once the GDP has recovered to the levels prior to the coronavirus pandemic, something that at its The trial will not take place until at least 2023. In this sense, Sánchez warned that Spain needs a “more stable” collection throughout the economic cycle, especially at a time when it is going to incur a deficit and a “huge” public debt. “

In addition, Sánchez referred to European aid instruments such as the European Stability Mechanism (ESM) and stated that in principle Spain does not have the need to resort to that tool, after the country yesterday asked the European Commission to access more of 20,000 million from SURE, the community fund to finance ERTE and self-employment benefits. In reference to the opposition that describes this request as a “rescue”, he said that he cared “rather little”, pointing out that “indeed, it is a rescue of the workers who need the support of the public.” “We are going to give it to them with our own resources as we have done so far and we are going to face this cost with European solidarity,” he stressed.

Reviewing the sanitary measures adopted to prevent the spread of the pandemic, he has ensured that, since the beginning of the crisis, more than seven million Covid-19 diagnostic tests have been carried out in Spain, of which more than four million have been PCR tests, which are added to the three waves of the seroprevalence study. Today, an average of 45,000 PCRs are performed daily, almost 315,000 a week.

According to Sánchez, more than 195 million individual protective equipment (ICUs) have been distributed and the strategic reserve has been reinforced, with more than 24 million units of sanitary material by the Executive. In any case, he has indicated that the framework purchase agreement will increase masks by 3.7 billion.

On the other hand, he underlined that the commitment of the coalition government “still stands”, reaffirming the commitment to maintain an “open” Executive, with a “culture of co-governance” with the autonomous communities. In this sense, he highlighted that 41 coordination meetings have been held with the regional health advisers and 14 meetings with the directors of public health. Also, according to Sánchez, the transfers to the autonomous regions have amounted to a total of 30,000 million euros in total. In general, the law decrees approved in recent months have amounted to 22.

Respect the decision of the King Emeritus

Regarding the announcement that the King Emeritus left Spain due to the repercussion of the information on the alleged collection of commissions and the handling of money in tax havens, Sánchez has pointed out that the Government respects the decision made by the Royal House, by “marking distances” for “alleged irregularities”, for the message it sends, of “exemplary and transparency”. He has argued that Spain needs stability in a time of crisis and this involves “robust” institutions.

“The Executive that I preside considers the constitutional pact to be in force,” he said, although the sector of United Podemos has already expressed its disagreement with the actions of Juan Carlos I today, which marks another gap in the coalition government. Faced with this, Sánchez explained that the members of the Executive have to coexist with “two different cultures”. “Based on the government agreement, we are two different parties with a different opinion and a way to face these challenges differently.”