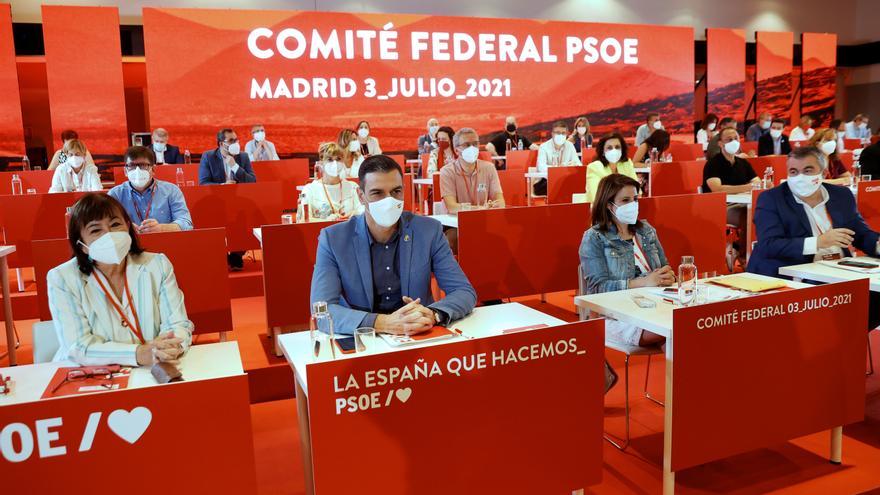 Pedro Sánchez has given a dose of pride to the Federal Committee of the PSOE, the highest body between congresses, by claiming the party's legacy throughout history. "The PSOE is a brave party," said the socialist leader in his first speech to the party after the granting of pardons, a decision that he referred to in his speech as "a strong message of empathy" for " all Catalans ". The secretary general, who has barely found internal opposition for the grace measures against the pro-independence leaders, has assured that they do not mean the resolution of the conflict in Catalonia, but a step in that direction.

"We know better than anyone the value of taking the first step and we will continue to do so", defended Sánchez, who has vindicated historical decisions of the PSOE that have managed to solve problems. You have mentioned the anti-terrorist pact proposed by José Luis Rodríguez Zapatero and the subsequent end of ETA, the reform of the army, the withdrawal of troops from the Iraq war, or the conquest of social rights, such as divorce, abortion, equal marriage or the euthanasia law. "We make our country advance while the right wing does what it always does to try to stop that advance," he said.

Aware of the fear of wear and tear that pardons may entail in certain territories, the president has sent a reassuring message to his own, recalling that "on the eve" of the approval of equal marriage, the polls drew a social rejection of 40% and that shortly after This figure dropped to 13%, placing Spain in the second country in which the most support received this measure. "Spanish society has the capacity to transform itself and take on new realities with conviction," he said. However, the PSOE closes ranks around pardons and the voices most critical of this matter, Presidents Emiliano García-Page and Javier Lambán, were absent for health reasons. Nor has Guillermo Fernández Vara from Extremadura attended for personal reasons.

"We know that the measures of grace that we have taken will not solve the crisis that Catalonia has been going through for more than a decade and those who oppose recognize that prison will not solve the crisis of coexistence," he argued: "Spain and especially Catalonia needs to return to cohesion, harmony and coexistence as soon as possible ". "Our guide is to be a party of answers, in agreement. We must claim that the PSOE is the party of hope," he added.

"The PSOE has always loved Spain," Sánchez has repeated on several occasions, who has gone back to the time of Francoism to recall that even then the socialist Juan Negrín from exile wrote letters in which he asked for the country's inclusion in the Marshall Plan and that some comrades criticized him because that meant "reinforcing the dictator in power." "That moment in our history as a party and as a country summarizes in an impeccable way what our organization represents: a form worthy of patriotism, honest and a courageous attitude to take the most necessary decisions and a long and deep look to promote the changes that we they lead to a more prosperous and modern country, "he explained before pointing out the differences with the PP.

On the PP: "Times of doomsayers are not coming"

"The more they shout, the more they show their absence from a project for Spain," he said about the role of Pablo Casado. "No case of a furious opposition," he told his followers at a time when polls predict an exponential growth of the PP that worries the party before the next electoral cycle of 2023. "There are no times of doomsayers, pessimists and people who see life in black and white, "continued the leader of the PSOE, who considers that the opposition of the PP" is indistinguishable from that of the extreme right. " "The same thing, they are such for which", has expressed the president, who has emphasized that the conservatives "no longer insult the PSOE but businessmen, unions and, never seen before, the bishops." For the president, this attitude largely seeks to "cover up his shameful corruption."

Faced with the attitude of the right that "proclaims the breakdown of Spain" or the "end of civilization" and that only serves to "hinder and destroy", Sánchez considers that "Spain needs today more than ever a project of hope" that , in his opinion, represents the PSOE. The president has taken the opportunity to defend the government's management and boast of the economic data as well as the "vaccination that goes like a shot." However, he has also sent a message of caution when recalling that an increase in COVID-19 infections is being experienced. "I understand fatigue but we cannot lower our guard," he warned: "Let's be careful."

He has also put duties on the Socialists for the "road map" ahead of the Socialists and the coalition government. The first has been the fight against sexist violence in the face of the spike in murders. "The battle of feminism is inescapable and is a matter for all of us. Sexist violence has to end there is no other priority for the government and for the PSOE," he said. "We have to banish once and for all this inequality, this torture to which these women and their sons and daughters are subjected," he said.

The other task is "to decisively address the problems and challenges faced by youth" to whom he has directly interpellated and with which the PSOE has been trying to reconnect for years: "We are going to be brave and determined to adopt the reforms that will change your material conditions and lives for the better ". "We are going to work so that you see that things improve," he has told those who he assumes that "they have been frustrated."

Sánchez has finished his speech referring to the call for the 40th Congress to be held in Valencia between October 15 and 17, although he has acknowledged that the Socialists are already promoting new "faces." That is when he referred to the Andalusian PSOE primaries in which Juan Espadas beat Susana Díaz. "I want my first words to be to acknowledge the work of comrade Susana Díaz," he said about the one who was his rival four years ago and that today, despite continuing to be secretary general of the PSOE-A, has not gone to the Federal Committee . "Now the responsibility is Juan Espadas", he has sentenced before giving him the floor: "He will be in charge of the PSOE returning to the Junta de Andalucía when the PP wants to call elections."

Espadas has said that he will make a "state opposition" and has called on the Andalusian socialists to take to the streets since, as he has narrated, the elections "are not won" in the town halls or parliaments. He has also marked distances with the management of Díaz at the head of the Andalusian government by saying that it is necessary to "re-tune and regain the trust lost in the groups" during the last years of management.

The mayor of Seville has also shown his support for the Government "that has had the most difficult time" and even for the "controversial and complex decisions" in a veiled allusion to the pardons. "We are playing the progress of Spain against the setback," he warned. In its debut, Espadas has called on the Socialists to be "brave and ambitious when it comes to tackling the debate on regional financing." "In this debate, Andalusia will always be fair, it will never be asking for more than its share, it will always be asking exactly not to be less than others, simply what corresponds to us," he asserted.