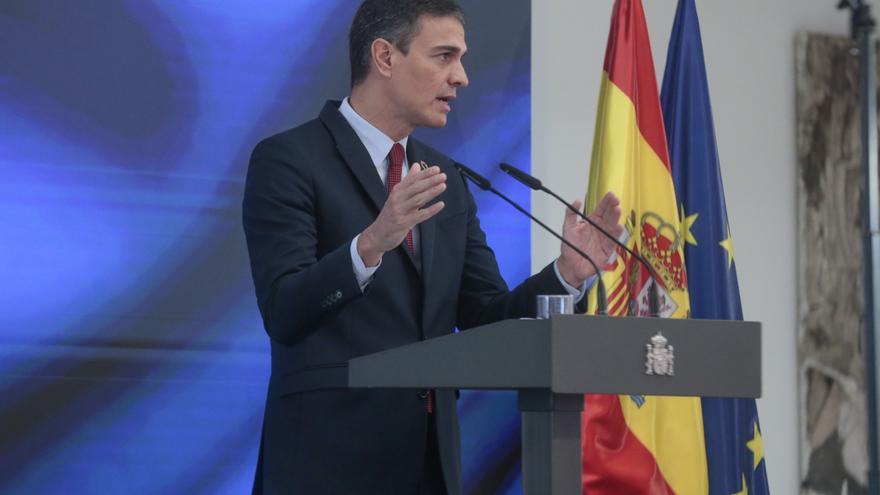 Pedro Sánchez transfers the pressure to Pablo Casado to agree to negotiate and to renew the General Council of the Judicial Power (CGPJ) that has been in office for two years if he wants the PSOE and United We can park the reform they have proposed of the law to circumvent the veto of the PP. “If the PP returns to the path of the sense of State, which is common sense, the Government is more than willing to reach an agreement now, without waiting a second longer,” the president said at a press conference in Brussels. The ball is, therefore, in the court of the leader of the PP, whom he has accused of trying to maintain the governing body of the judges with the reflection of a parliamentary majority of 2011 that is radically different from the current one. “It is not acceptable,” he declared: “What cannot be done is to maintain a blocking position that has lasted two years and whose visions are to be six years, until the next legislature at least.”

In the appearance after the meeting of the European Council, Sánchez has shown the hand extended to the PP to reach an agreement with the current regulations, which require their participation in the agreement since the renewal takes place with a three-fifths majority in Congress and the Senate. But he has also defended the legislative proposal that the PSOE and United We Can have presented this week to include a “safeguard and anti-blockade clause” in case it is impossible to reach that reinforced majority of 210 deputies. The proposal registered in Congress states that, if the support of the three fifths is not reached, the CGPJ can be renewed with an absolute majority (176 votes, a figure that the coalition can reach with its parliamentary allies). Sánchez has also maintained that the government of the acting judges “cannot continue to appoint judges.” “We have to define what are the competences that it has in a situation of blockade like the one we are experiencing,” he said about the second part of the proposal promoted by the socialist and confederal groups, which establishes limitations to the Judicial Power when its mandate expires.

The president has accused the head of the opposition of having unilaterally broken on two occasions the agreement to renew the governing body of the judges – one in 2018 when the leak of a WhatsApp message from the then spokesman in the Senate, Ignacio Cosidó, presuming From the control to the judges he made it fly through the air and the other this summer when, according to Sánchez, there was an understanding “at 99%” and the conservatives “inexplicably” broke the bridges. But at the same time he has shown himself willing to sit down immediately to negotiate the change in the Judiciary “under the premises” of that preliminary agreement reached in the summer.

“The party holding the Judiciary hostage is the party that has been blocking the renewal for two years,” defended Sánchez, who has urged Casado to negotiate with the current rules so that it is not necessary to undertake the reform of the law to modify the Majorities: “If the PP uses the law to block the Constitution, the legislative branch has the responsibility to modify the law so that the Constitution is complied with. As Executive we tell the PP that we are now open to sit down to negotiate under the agreed premises in July and August that were inexplicably broken unilaterally again by the PP, to reach a renewal as soon as possible, because that is what we want, “he has settled.

The demand posed by the PP is that United We can stay out of the negotiation. Sánchez’s response is that the parties that are part of the coalition must be respected, but he has made it clear that the talks are being piloted, in any case, by the Minister of Justice, Juan Carlos Campo, so technically those of Pablo Iglesias they are not part of it. “The approach seems to me that it says little about the will to reach an agreement on the part of the PP. It knows that this is a coalition government,” Sánchez responded. “I have said on many occasions that there are no ministers of the PSOE or United We Can, there are ministers of the Government of Spain. In this case, with whom the PP has to negotiate is with the Minister of Justice, who is in charge of these issues in the Council of Ministers, it seems to me to be common sense, “he concluded.