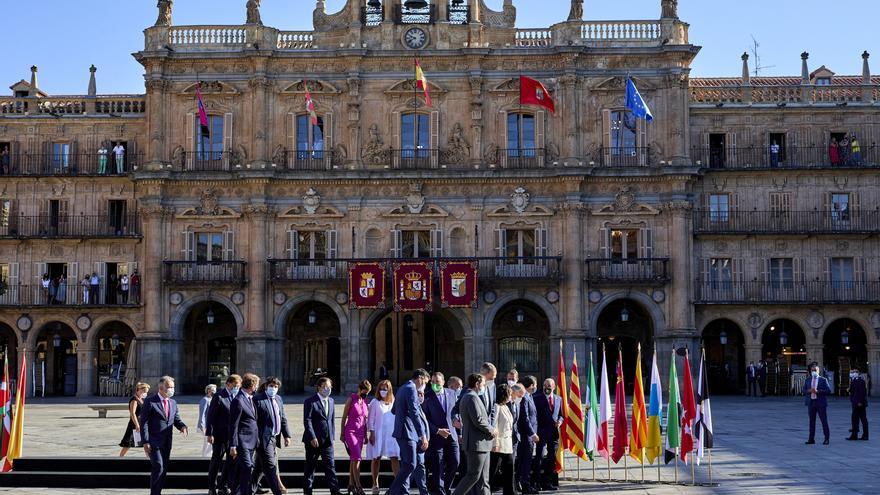 Francisco de Vitoria, Cristóbal Colón, Santa Teresa de Jesús, Unamuno… And now Pedro Sánchez in the company of the regional presidents, except that of Catalonia. All found support or advice at some point within the walls of the convent of San Esteban in Salamanca. So from this July history can already record a new appointment for the annals and another string of illustrious visitors to the Dominican complex, which once again became the center of the world. This time from the politician.

Felipe VI went there – despite the informality of the appointment denounced by the PP – to receive autonomous, plural, federal, multilevel Spain. As you like. It was actually the XXIV Conference of Presidents –The eighteenth of the Sánchez mandate–, a conclave that ended much better than expected for Moncloa, which managed to deactivate the boycott that Pablo Casado had prepared with his barons the night before, enlivened by a group of rogues to the sound of Carnations, and to count for the first time with the applause of all the socialist barons. The formula: a shower of millions and vaccines.

Spain will receive in the coming weeks 3.4 million doses of sera in addition to those already planned and the autonomous communities will manage 10,500 million euros of recovery funds, which will represent 55.5% of the more than 19,000 that our country will receive from the European Commission in 2021 and 43% of the 24,197 budgeted this year. With these two announcements and a string of promising economic data, the Prime Minister managed to appease the criticisms of those who, spurred on by the PP leader, accused him of turning the summit into a “fraud” and of not applying the co-governance to which he so much appeal in their interventions.

The appointment had been scheduled, with an extraordinary character, to face the current situation of the pandemic, to discuss the distribution of European funds for the reconstruction of the country and to take stock of the commitments made in the face of the demographic challenge. Three important issues that the right summarized in a kind of “paripé” for Sánchez to dismiss the course with a photograph without content in front of the portico of San Vicente.

The barons of the PP arrived, therefore, with the learned argument. So much so that, despite Sánchez’s announcements, they continued to speak of an “informal meeting” loaded with “logistics that could have been held by videoconference,” in the words of the president of the Xunta de Galicia, Alberto Núñez Feijóo. This in the press conference after the conclave because, except the Madrilenian Díaz Ayuso, the interventions that took place within the plenary did not include reproaches or semantic spasms. It is what the theater of politics has, that one thing is what is said to have been said and another, what is actually said.

The President of the Government deactivated criticism about the level of vaccination not only because Spain is one of the most advanced countries in the world in the administration of doses, but because it announced a new and notable delivery of vaccines in addition to those already planned for this same August. What it did not prevent was that the popular in unison denounced the breach of the Statutes of the Conference of Presidents, demanded an equitable distribution of European funds and included some allusion to the supposed privileges of Catalonia and Euskadi. The comparison with the epidemiological and economic situation is unimaginably much better than a year ago, so, as the Castilian-La Mancha president Emiliano García Page says, “we have the right and the obligation to be reasonably satisfied.” The rest is just noise.

It was Isabel Díaz Ayuso, according to the version of barons of all political colors, the only one who maintained the sour tone – in addition to being casual – during the plenary session. And not only to venture that the distribution of European funds will be “arbitrary” and demand more vaccines, but also to demand from Sánchez “loyalty to the communities faithful to the unity of Spain against the privileges of Catalonia and the Basque Country.” He also defended fiscal autonomy, understanding that “all autonomies must be free to carry the policy they consider within their fiscal co-responsibility.” And so it was declared “against what they call fair taxation and which consists of raising taxes on Madrid, which has been the capital for five centuries because it was decided that it is the best.”

The head of the Madrid Executive, who the night before was received in the Salamanca city by a large group of enthusiastic followers, rejected the “alleged grievances due to capital status, a mantra increasingly spread against Madrid, and that is something that is not heard in other countries such as Germany and France “, at the same time that he condemned the talk of” economic centralism “because his region is” the one that contributes the most and the ninth to receive. “

Despite the repeated calls from the rest that there were no “ideological tribes” at summits like the one held in Salamanca, the president of Madrid criticized, in reference to the meeting that the Government will hold on Monday with Catalonia in compliance with the Statute, that there are those who try to “take advantage of the context of these conferences to obtain a series of benefits, if not a bilateral meeting”. An argument also outlined by the Andalusian Juan Manuel Moreno, who demanded “bilaterality” for Andalusia.

Beyond the interference and the “polarity” of those who behave in a different way and background depending on whether they are in the meeting or at a press conference, the majority of the presidents praised the tone and importance of the deliberations, as Page did. , who asked for a more constructive spirit for these appointments “from loyalty”, while appreciating the “sensible” behavior of almost all the autonomies during this year and a half. He also prudently praised that vaccination is going very well, he opted to send a message of unity and on the expectations generated in terms of European funds he called attention so that they reach companies quickly and do not consolidate future structural expenses. Page’s position on the new regional financing system, which has not yet begun to be negotiated, coincides with that of many PP barons in terms of “equal conditions, regardless of the place of residence.”

While the also socialist Guillermo Fernández Vara demanded that the mandatory use of mask between December and March beyond the pandemic to avoid the 15,000 annual deaths from winter viruses unrelated to COVID-19, the Valencian Ximo Puig, opted to launch a national plan on mental health in children, adolescents and young people. And in economic matters, he asked for more decision-making capacity to define recovery projects and “fair taxation between territories, without grievances.”

Government celebrated the “climate of collaboration” of the summit and defended that recovery and vaccination are “collective successes” of the Executive and the communities. The Government spokesperson and Minister of Territorial Policy, Isabel Rodríguez, valued that the Executive “is in permanent listening” with the regions and that the conference had been held in a “very relaxed tone” by all the regional presidents, that they have received “with enthusiasm” Sánchez’s announcements of the new acquisition of Pfizer vaccines and that 55% of the European funds will be transferred to the communities. In fact, the meeting “ended with unanimous and sincere applause.”