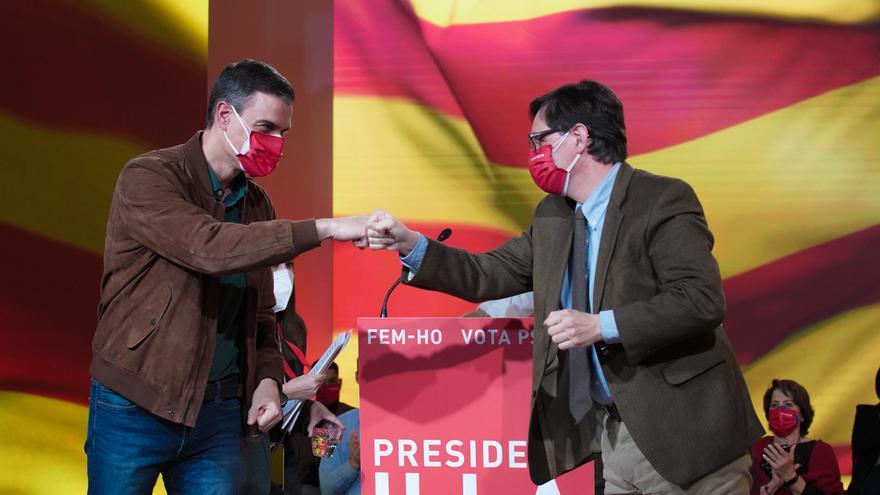 Winning sometimes does not serve to govern and it is likely that Salvador Illa will not get the key to the Generalitat. Still, his bid for 14F has been a resounding success. For the PSC, which achieved its best result in 15 years and became the leading political force. For the former minister, who does not blame the management of the pandemic at all, much less the furious attacks from the political and media right wing. For the PSOE, which consolidates its commitment to dialogue and meeting in the face of the territorial conflict. For Sánchez, who scores the same on his winning score and comes out of the stake stronger. And for the coalition government because it consolidates its strategy of hand out to independence.

The leader of the PSOE reinforces his victory by also seeing that the national alternative represented by the PP is very weakened in these elections, since those of Casado have only won seats in one of the four Catalan provinces (Barcelona) and have also been widely surpassed Vox. If the PP had achieved 7.42% in the last general elections, in this Sunday’s elections it has not reached 4%, even worse than in the failure of the previous regional ones. And, on the other hand, the party led by Santiago Abascal exceeds the sum of PP and Ciudadanos, which definitely opens the battle for the leadership of the opposition and gives oxygen to the coalition of PSOE and United We Can.

The “Illa effect” was therefore not a mirage. The candidacy of the former Minister of Health wins in votes in the Catalan elections and ties in seats with ERC, which will surely not serve to immediately turn the page in Catalonia as the PSC candidate wanted, but at least to save the PSOE entente with Republicans in the Congress of Deputies, even in the event that the Government that results from this call was finally pro-independence, since ERC, which achieved the hegemony of secessionism for the first time, has already declared the “magic independence movement” for dead and one-sidedness. His commitment to dialogue with Madrid and the entente with Sánchez are not temporary.

Last night, the Secretary of Organization of the PSOE, José Luis Ábalos, was in charge of holding the “majority vote for the reunion and coexistence”, against a right, both the independentist and the rest, which has been, in his opinion, the great loser. “We Socialists will not disappoint the trust they have placed in us. We therefore accept the role that the voters have assigned us and from there and to the best of our strength, we will try to return Catalonia to its rightful place, at the forefront of the economic growth and social justice, “he said after Illa announced that he is going to stand for the investiture to preside over the Generalitat, after confirming that he has been the most voted at the polls and although he has no votes to be invested.

So far the first derivative of the Catalan elections. The second is the tidal wave that the 14F leaves on the Spanish right wing, which is already the extreme right without palliative measures in Catalonia. VOX bursts into the Parliament with 11 seats, drags Ciudadanos to the UCI -after going from first to penultimate force and losing 30 deputies- and turns the PP into a more irrelevant brand than it already was by staying with only three parliamentarians. If Arrimadas faces a possible liquidation of the brand in Spain, Casado’s leadership is once again in question.

The popular ones are left with hardly any margin to reach state agreements with the PSOE, after the force with which the extreme right enters the Parliament. And in Genoa, where they believe that it will not be easy to overthrow a president elected in primaries, they are already prepared to face the offensive of the barons. For now, the general secretary of the PP, Teodoro García Egea, has been quick to say that neither the party is going to “change course” after the bad electoral result, nor are the results obtained in Catalonia extrapolated at the national level. His reading: everything is the fault of the “dirty game” suffered by the popular in the electoral campaign after the new statements by former PP treasurer Luis Bárcenas. He said it in yet another way: “This is the last bill we are going to pay from that past. We are not going to change course and we are going to continue working.”

There is still a third national derivative and that is that, after the failures of Galicia and the Basque Country, the commons keep intact their representation of 8 deputies in the Parliament, which is undoubtedly a success also for Pablo Iglesias, who predicted another disaster, after the downward trend of the last elections and the bump in Galicia. Despite the bad predictions and with Illa and the CUP on the rise, the purple ones did not back down a single seat in favor of the PSC.

Now, everything depends on ERC and how it manages its hegemonic position within the independence movement. Those from Junqueras have two options: either they repeat the government with the Junts or they try a government alone (or with the commons) of variable geography, which in practice would be an agreement with the PSC.

And, according to what was said in the campaign, the veto signed against Illa and the statements made by Aragonés on election night, it is most likely that he will favor the first option. Even in that case, the final result would reinforce the majority bloc that gave Sánchez the inauguration. In the end and in the end, the independence movement has no other way than to collaborate with the government if it seeks to get out of its labyrinth. All in a context of economic crisis and with the challenge of managing the recovery funds that arrive from Brussels.

The worst scenario for La Moncloa was a Junts victory that has not occurred. The best, that ERC won the battle within the independence movement. And the one that has resulted is an infinite tie in seats between Socialists and Republicans that no one doubts that it will serve to recover the dialogue table and accelerate the pardons of the procés prisoners, a central issue for those of Junqueras. The national board has also moved and the consequences are yet to come.