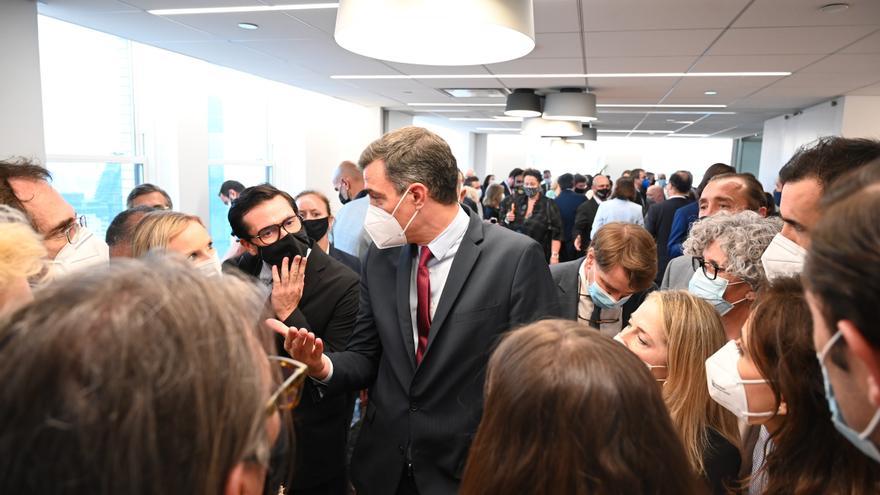 The President of the Government, Pedro Sánchez, does not intend to force the renewal of the judiciary with the reform to reduce the necessary majority and, therefore, has called on the PP to make a “reflection”, stop “hindering”, and sit down to close once and for all an agreement that puts an end to the interim status of this body, whose mandate expired more than two and a half years ago.

After the new notice from Brussels urging renewal, and on the point that the new Minister of the Presidency, Félix Bolaños, begins his first round of contacts with the PP and the rest of the political formations, Sánchez has wanted to make it clear again that the ‘popular’ are responsible, in his opinion , of the blockade, and that they are therefore the ones who must move.

This has been revealed in an informal conversation with journalists during his economic tour in the United States in which, when asked if he plans to call the leader of the PP, Pablo Casado, he has indicated that this negotiation must be addressed between the parliamentary groups , in Congress. In other words, Sánchez has implied that it is not in his plans to personally contact the opposition leader now to discuss this matter.

In this way, he has delegated to Bolaños the task of trying to redirect this negotiation, after this Wednesday the new Minister of the Presidency and responsible for the political coordination of the Government defined himself in an interview on TVE as a “man of pacts.” . Of course, the president has stressed that it is the PP that must “reflect” and renounce its blocking position, to “give prestige” to the institutions.

In his meeting with the press, which took place in New York before taking off to Los Angeles, the Chief Executive has avoided delving into this matter and other national policy issues, to focus on defending the opportunity that this trip represents for the Spanish economy thanks to the investments that it hopes to have attracted in its meetings with leading investment funds and American banks.

Appears on the 29th before the summer holidays

However, Sánchez has advanced that next Thursday, July 29, he will offer in Moncloa the traditional balance press conference before the summer break, in which he will have the opportunity to comment on the different current affairs in depth.

This Wednesday is the first informal meeting that Sánchez stars in with the press to comment on the news since the one he had in April on his trip to Senegal and Angola and, therefore, after granting pardons to those convicted of the illegal referendum of 1 October 2017, and after the government crisis. Although he has not commented on the matter, he has indicated that “there are months that are worth years.”

On the other hand, on the electoral forecasts that the polls give the PSOE, and the fact that many of them place them in decline, the president has downplayed the polls and assured that there are still “many” left until the next elections in 2023. In addition, he has highlighted that some studies do point out good expectations for the socialists, as the latest barometer of the Center for Sociological Research (CIS).

In any case, the chief executive hopes that by 2023 the reforms that the Government is promoting within the framework of the recovery plan will have begun to take effect, and it can be demonstrated with “facts” that the Government is working, in the face of an opposition that he only “shouts”, as he has shown in the interview he gave Reuters at the Cervantes Institute in New York, after his meetings with US magnates.

In those meetings, the businessmen have taken the opportunity to convey to Sánchez their concerns about some of the reforms that the Government is preparing, such as the housing law and the possible limitation of rent prices, the pension reform or the repeal of the labour reform. In this regard, the president has tried to reassure investors, ensuring that the reforms will not involve abrupt changes, but in line with what other European countries do.

Likewise, he has once again justified the need to carry out this exclusively economic tour, without trying to schedule a meeting with the US president, Joe Biden, although he has assured that he would be delighted to see him. In addition, he has valued the meetings held by the Minister of Industry, Commerce and Tourism, Reyes Maroto, this weekend with representatives of the Biden administration, before joining the president’s tour.