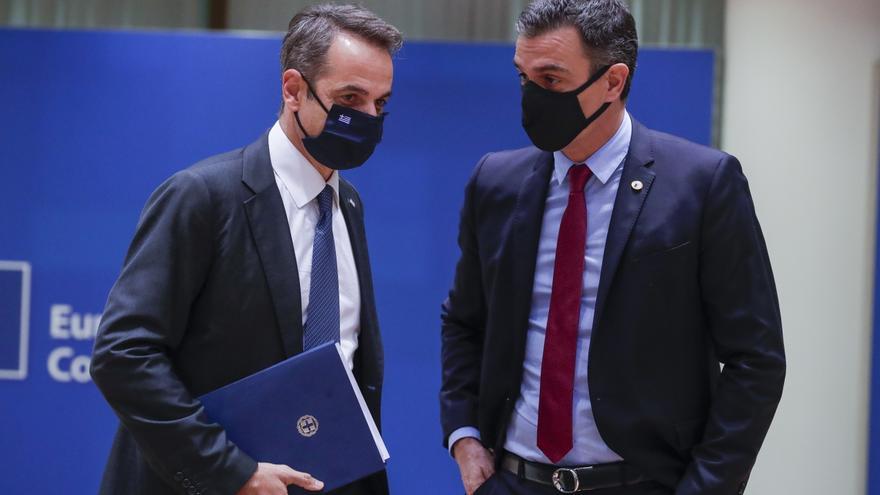 Pedro Sánchez rules out legal changes to face the final stretch of the COVID-19 pandemic after the lifting of the state of alarm, which has caused a wave of warnings from communities and political parties regarding the problems to face what remains ahead until vaccination is effective for the population as a whole. "The Government of Spain is clear that all the communities in this stadium have sufficient instruments to face the pandemic," was the president's response to these criticisms at a press conference in Athens, where he participated in an economic forum and has taken the opportunity to hold a bilateral meeting with the Greek Prime Minister, Kyriakos Mitsotakis.

"We have enough instruments to deal with any contagion," the president reiterated in the face of pressure from communities of different political colors and the PP, as well as from other parties, such as PNV, ERC or Más País, for the Government to take measures to endorse restrictions against COVID-19 once the state of alarm has ended. However, Sánchez has been determined for weeks to get out of the exceptionality largely to save the summer season financially. The president has defended that the autonomous governments have instruments, through the 1986 health law to establish restrictions that allow them to fight the final stretch of the pandemic.

The Government made a legislative modification last week through a decree law that will have to be validated in Congress so that the autonomous communities can appeal to the Supreme Court in case the corresponding higher courts of justice overturn the restrictions, as has happened in Euskadi. The intention is that it dictates jurisprudence and the measures can be homogenized after the different interpretations that the judges have made. However, the high court has questioned the Executive's move and within the cabinet there are doubts that the Supreme Court can endorse restrictions such as the curfew -which have been raised by several communities- without a state of alarm.

One of the voices that has spoken in that direction is the Minister of Justice, Juan Carlos Campo, who has acknowledged that he does not believe that the Supreme Court can ratify the curfew, as has, for example, the Superior Court of Justice of the Balearic Islands. However, Campo has assured that he is awaiting a pronouncement. In a tribune in El País he has even affirmed that "if the resolutions" of the Supreme Court "reveal the need to make additional legal changes, they will be studied and proposed to the Courts. Campo has subsequently settled the controversy raised in an interview in Al Rojo Vivo (La Sexta): “The Government is not preparing any regulations. The legal system is comprehensive and complete to address this situation ”.

The president then spoke in the same direction and once again celebrated the rate of vaccination. "A third of the adult population has a dose administered and half of them, the complete schedule. Today we are going to meet six million with a full schedule. We are only one hundred days away from achieving group immunity," he said. However, Sánchez has warned that you cannot "lower your guard" in the face of the acceleration of the vaccination process in reference to the images of parties and bottles in various places in Spain after the end of the state of alarm: "The vaccination is going very good but I would like nobody to lower their guard. The virus continues to circulate. "