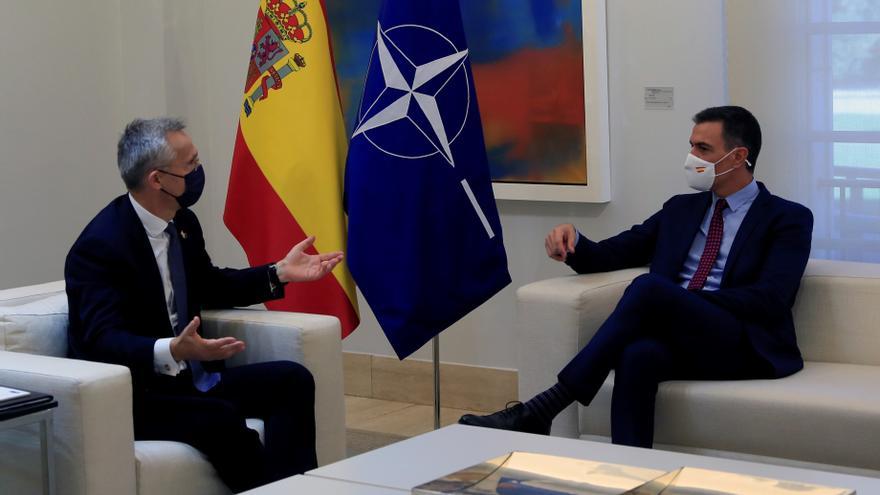 The President of the Government, Pedro Sánchez, who continued his contacts with international leaders this Sunday to address the situation in Ukraine, reiterated to the Secretary General of NATO, Jens Stoltenberg, Spain's commitment to the Atlantic Alliance and the security of Europe .

As sources from Moncloa have informed Efe, Sánchez has had a telephone conversation with Stoltenberg, to whom he has conveyed his commitment to dialogue and his confidence that diplomacy is the path to de-escalation.

"We support the sovereignty and territorial integrity of Ukraine and we trust that diplomacy and dialogue will be the way of de-escalation in this crisis," added the president on his Twitter account.

Sánchez and Stoltenberg have also addressed the preparations for the next NATO Summit that Spain hosts in June, a key event for the future of the Alliance.

The president has also spoken with the president of the European Commission, Ursula von der Leyen; both underlined the importance of the unity of the 27 in resolving the current crisis with Russia and stressed that the will of the international community is firm and that the EU is prepared for "all eventualities".

Pedro Sánchez also plans to talk this afternoon with the Prime Minister of Latvia, Arturs Krišjānis Kariņš, to analyze the latest events.

Since the Ukraine crisis broke out, the President has been in permanent contact with the leaders of the European institutions and NATO, as well as with the Heads of State and Government of Spain's partner and allied countries.

The list of contacts has included the highest European representatives throughout the weekend, from the President of the European Council, Charles Michel, or the High Representative for Foreign Policy, Josep Borrell, to the Prime Minister of Poland, Mateusz Morawiecki.

In the coming days, he will also speak with the President of Lithuania, Gitanas Nausėda, and with the Prime Minister of Estonia, Kaja Kallas.

These contacts are added to those held these days with the President of France, Emmanuel Macron, and with the Prime Ministers of Norway, Jonas Gahr Støre, and the United Kingdom, Boris Johnson, in addition to the meeting with the Chancellor of Germany, Olaf Sholz.