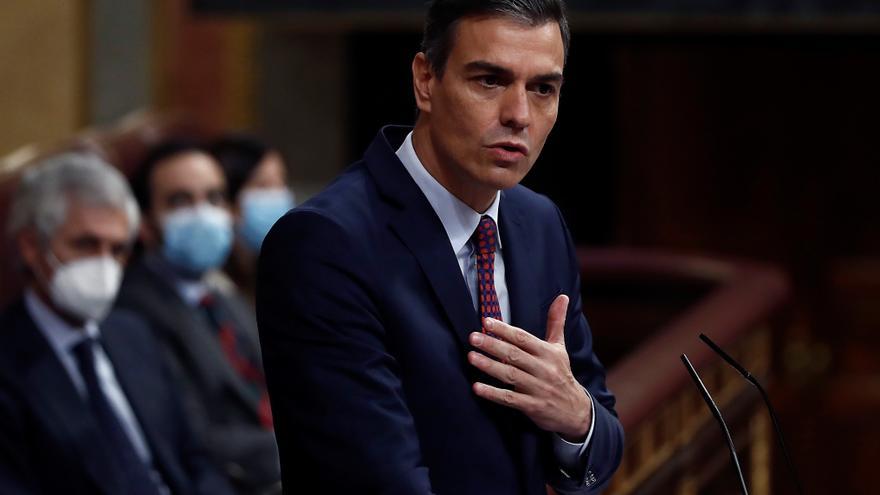 Pedro Sánchez offers a middle way to the opposition regarding the duration of the state of alarm that the Government raises for six months and that most groups consider to be “excessive.” The president has proposed in Congress that within four months – in March – the Interterritorial Health Council review the situation and consider whether or not it is necessary to maintain that exceptional measure that is included in article 116 of the Constitution and with which the Executive has endowed the regional presidents with the legal framework to establish restrictions such as the curfew, the perimeter closure or the limitation of social gatherings.

The Government defends that half a year is what the experts advise and that it serves to provide a stable framework for the communities. In addition, it maintains that the state of alarm can be in force without measures being taken if it is not necessary. Given the criticism for the duration, including the PP, Sánchez has proposed during the control session that in four months the interterritorial council in which the Government and the communities are represented analyze the situation. Until now, the Executive had already defended that the state of alarm should be lifted as soon as it was no longer necessary, but Sánchez’s announcement sets a date and a specification for the review: March 9 and through the Interterritorial Council.

“If it stipulates that the alarm is not necessary, the Government will review its decision and if it says that we have to continue another two months, the Government will keep that tool” until May 9, as is foreseen in the extension that will be debated this Thursday. However, the PP believes that this approach involves “eluding Parliament.”

“The Government is for unity and unity means listening and reaching out,” said Sánchez, who has formulated his proposal in the ‘face to face’ with Pablo Casado, whom he has reproached for making “mistake after mistake.” He has also reproached the conservatives for having “denigrated” the constitutional tool of the state of alarm. Casado supported her in the months of March and April, but then he picked up the hook and went to abstention and later to ‘no’ during the first wave of COVID-19. The PP’s proposal is to reform the legal package of sanitary standards so that exceptional measures can be applied without the need to resort to a state of alarm.

Sánchez has reproached Casado for “qualifying the state of alarm as a constitutional dictatorship”. “Either dictatorship or constitutional, both is impossible,” said the president, who has appealed to the “responsibility” of the main opposition party in this second wave.

Casado, for his part, has kept his “hand out” to Sánchez to support the extension of the state of alarm -which the autonomous governments of the PP are applying to restrict movements-, but has conditioned its duration to two months to “save Christmas “. The opposition chief maintains that reducing the duration would help prevent the December jobs campaign from spoiling, but has assured that it would also serve to maintain “the hope of thousands of older people.” “Why don’t you accept this proposal for this second wave of the coronavirus?” He asked the president after recalling his “legal plan B” to face the pandemic. In addition, the president of the PP has assured that he has been proposing economic measures for months and has referred to the Budget project that the Council of Ministers approved this Tuesday as a “ruinous plan that is only going to worsen” the situation.

“He tripped over the same stone twice,” Casado told him, who also reproached Sánchez for not coming this Thursday to defend the extension of the state of alarm and that he delegated to the Minister of Health, Salvador Illa: “He has given So much shame is this cacicada that she does not even come to the Cortes to validate her tomorrow. ” “Abandon radicalism, listen less to the extreme left. My hand is still extended, for me it will not remain,” said the leader of the PP a week after rejecting Vox’s motion of censure, which was interpreted in the Government as the opening of a door to reach agreements, such as the renewal of the General Council of the Judiciary (CGPJ).

Casado believes that Sanchez’s statement of the state of alarm involves “eluding Parliament.” “Less hello president and more to come here, “Casado concluded in reference to the president’s appearances in Moncloa.

The secretary general of the PP, Teodoro García Egea, has answered harder in his row with the second vice president, Pablo Iglesias. “Democracy is not a bazaar, you do not haggle. You propose a six-month alarm and replace Parliament so that decisions are made by the health councilors of the communities in a body that has the majority of the PSOE. Take off the complexes and that Ferraz decides, “he said, questioning the president directly.

“In fifteen days they put Pablo Iglesias in the CNI. In 6 months without parliamentary control, what are they going to do? If they delegate their powers to the communities and those of Parliament to the Interterritorial Council, what are they for? Leave and we will finish earlier “, has settled.