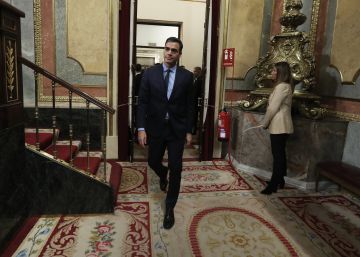 The acting Executive of Pedro Sanchez has decided to postpone the rise in pensions and the minimum interprofessional salary (SMI) until a new government is constituted. He will wait for a investment to leave the decision to the next Cabinet, according to several sources of the Executive. “We hope this does not go beyond January,” said the same sources. The plans, however, remain raise pensions 0.9%, revalue the salary of officials 2% and revise the SMI upwards.

The political blockade has ended up affecting pensions, the minimum wage and the remuneration of officials. It’s been weeks since the Minister of Labor, Magdalena ValerioHe had expressed his doubts in public about the possibility that a functioning Government could raise the pensions by 0.9% announced to the European Commission in the budget plan for 2020. The usual criterion of the State Advocacy is that an Executive who it does not have full functions it cannot make budgetary decisions that compromise the following. And, finally, that has weighed on the decisions that have traditionally been taken in recent years when this circumstance has occurred.

On this occasion, in addition, other political reasons are added. The decision represents an added pressure for the parties that doubt whether to support a government chaired by Sánchez. The will to postpone these increases is political because the Executive did find last fall a legal loophole to unlock the funds of the autonomy financing system despite being in office.

The Executive plans for pensions go through delaying revaluation even though they could have risen 0.25%, as established by the current Social Security law, as drafted since 2013. This rule was suspended in 2018 and 2019, But next year, as the reform that would link the annual pension improvement to the rise in the real CPI was not approved, it would be in force again. To avoid this rise of 0.25%, the Executive has decided to approve a decree law to suspend the rule pending that in a few weeks there will be an investiture. When there is a government formed, the 0.9% may increase, which will be retroactive from January 1.

Labor sources explain that raising now 0.25% and then increasing the remaining 0.65% is an unnecessary resource expenditure. However, it does not escape that this annual increase of 0.25% was very criticized by the PSOE when it was in the opposition. Then he repeatedly pledged to repeal the rule whose application imposes that increase when there is a deficit in Social Security, as has been the case since 2011. The Socialist Executive renewed that commitment when he returned to the Government. So applying that rise now would be a bad political drink that Sanchez doesn’t seem willing to assume. Following the same criteria, the Executive will not touch the contribution bases now: neither the minimum ones (always linked to the minimum wage) nor the maximum ones.

The same goes for the salary of officials. The Government will only approve the agreed increase of 2% to public employees when an Executive is constituted with guarantees. In this way, the salary improvement will also not come to light with the entry of the new year, but it will take a few days or a few weeks until an investiture proceeds. Acting Minister of Territorial Policy and Public Function, Luis Planas, explained weeks ago that, legally, a functioning Government cannot carry out this increase. But he clarified that this will be accrued on January 1.

On the SMI side there were not so many legal doubts to approve it. Although there are benefits and grants that are linked to its evolution, it seems that the State Advocacy does not see obstacles. However, here the problems derive from the negotiations to form a new Government and the demands of the social agents. The PSOE and Unidos Podemos are talking to set an SMI target for this legislature: 60% of the average salary. However, on the other hand, unions and businessmen demand that they be counted on and not done as last year, when Pedro Sánchez and the leader of Podemos, Pablo Iglesias, agreed to an increase in the salary floor and gave no room for dialogue Social.

By 2020, sources of Labor point out, the plan is to extend the current 900 euros per month and set the commitment that the new Government quickly negotiates with unions and businessmen a path that leads the SMI to that 60%. The responsibility for carrying out these new negotiations may fall on a minister of United We can if, as published, Yolanda Diaz ends up accessing the portfolio.