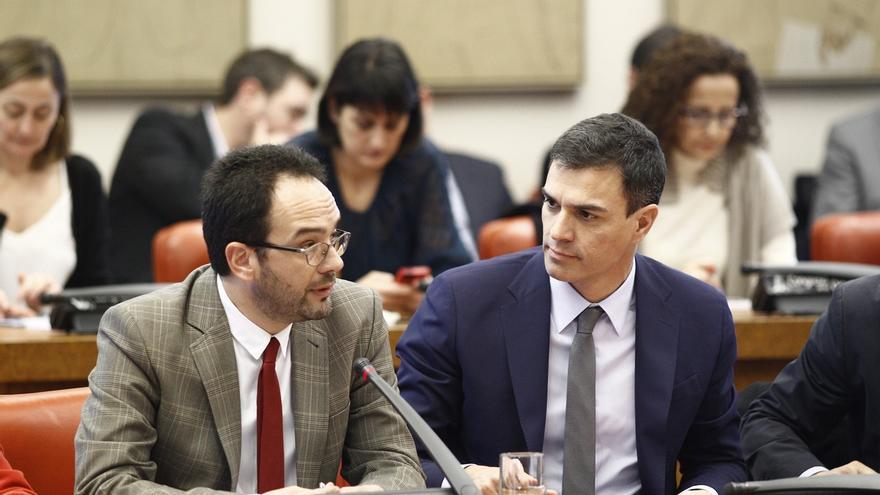 "The boys in White" are back. There were three of them and only one crowned the top. Politics brought them together first and politics separated them for years. A convulsive Federal Committee, a motion of censure, a manager in the party, the "no es no", the primaries, the egos, the internal struggles ... Life itself. Pedro Sánchez, Óscar López and Antonio Hernando, three young socialists whose landing in public life coincided in time, first in Brussels and then in Madrid, will work together again after four years of political and even personal distancing. For years they did it in the socialist plumbing under the baton of former deputy secretary general José Blanco. Now, they will do it in La Moncloa, where last July Sánchez incorporated López as chief of staff of the president and now adds Antonio Hernando as deputy director to complete the political strategy team with which the president will face the second half of the legislature.

There will be opinions for all tastes about the imminent signing. It will make people talk, for sure. Some will like it. Others will be alerted. Everyone will be speechless. But Sánchez has internalized the unity of the party like no one else, and the incorporation of Hernando is the definitive symptom of his firm will to heal wounds, even the deepest ones, which are never political, but personal.

The idea that Hernando would join the new "Monclovita" team was discarded just a few weeks ago in the closest nucleus of Sánchez in the game, where they assured that one thing was the incorporation of Óscar López, with whom the fracture was never so deep, and another, the signing of Hernando. The latter is not forgiven by the most "sanchistas" of Ferraz for staying at the party headquarters for the convulsive night of the Federal Committee that precipitated the fall of Sánchez and for defending, later, the abstention in the investiture of Mariano Rajoy, something about what the party leader has turned the page according to the latest signs. Not in vain the President of the Government and Secretary General of the PSOE has consolidated an unquestionable leadership in these four years, recognized even by the perennial critic Felipe González in the conclave last weekend.

Sánchez, López and Hernando had a shared past during their youth in the European Parliament and a bomb-proof friendship that was blown up in the PSOE primaries. Of all, the current President of the Government was perhaps the one with the least political future predicted by the other two. They were wrong. Now, in this new PSOE of "peace and love", the president returns to his emotional origins and counts for his hard core with those who were his inseparable friends and battle companions in the party until the 2017 primaries produced them, even more. than to the rest of the socialists, a very deep wound.

Like López, who rebuilt his relationship with the president months ago, Hernando also resumed contact little by little since Zapatero broke in as an adviser in the shadow of the Government. In fact, it was speculated with his possible "resurrection" already in July when Sánchez decided to "return" to the PSOE, to count for your new team with classic socialism and recover some faces that he himself had set aside years before from the front row for not having supported him in his organic competition against Susana Díaz.

Hernando, who left politics and created with José Blanco - mentor of the three socialists - a consulting firm under the Acento Public brand Affairs, will now join the president's cabinet in the position vacated by María Llanos Castellanos, who joins the Federal Executive as responsible for Justice, Institutional Relations and Political Function. López, who incorporated her as deputy to the leadership of the president's cabinet, has not finished connecting with who was also president of National Heritage, with a more technical than political profile, and has decided to drag his friend Hernando to his side.

The signing has been finalizing for days, but neither Sánchez nor López wanted it to transcend during the federal congress until they were looking for a fit for Llanos Castellanos, who is not even aware of the name of his replacement, although Sánchez informed him on Friday that his adventure in Moncloa was just ending three months after starting. With her will also leave his closest collaborators, as well as several of those related to Iván Redondo who still remain in the presidential complex.

End of stage, therefore, in every way. The president has turned the page of "roundness" even before his former chief of staff has, who walks the sets claiming to be a spin doctor and building his own narrative about his dismissal and his current relationship with the president. The "boys in White" return and the "shoemaker movement" returns, whose main collaborators once again swarm the corridors of La Moncloa and have already aroused some suspicion among the extinct "sanchismo" of Ferraz, where they are aware that the political strategy for the next general election is already in the hands of López and soon also in those of his inseparable Hernando.