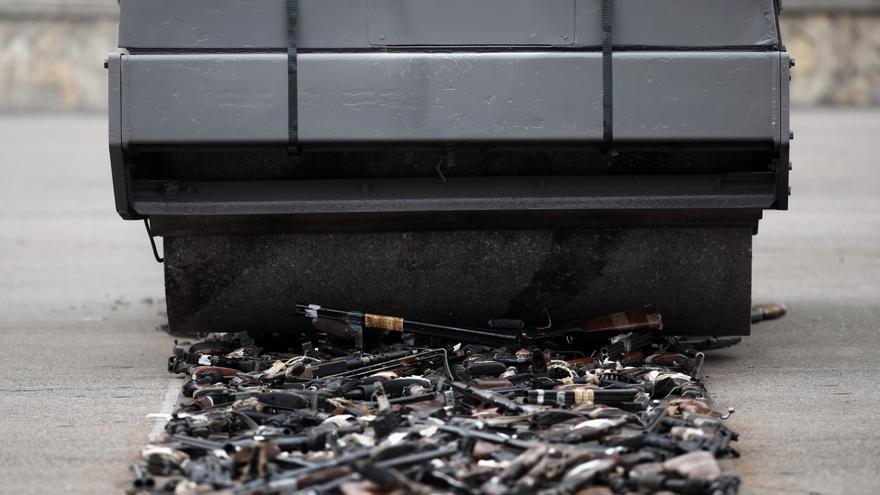 The President of the Government, Pedro Sánchez, defended this Thursday the memory of the victims of ETA, the GAL, the Grapo and jihadism in a symbolic act of destruction of more than 1,300 weapons seized from terrorist organizations held at the College of Young Guards Duque de Ahumada de Valdemoro (Madrid) who, despite being invited, did not have the assistance of the leaders of the opposition or the former presidents of the Executive.

In an act where a steamroller was used to stage the destruction of weapons as a “great symbol” of the victory of the rule of law, Sánchez stressed the importance of “continuing to defend the memory” of the victims of terrorism, something that must “proclaim very loudly”, as he said, citing ETA, GAL, Grapo, Daesh and far-right organizations.

Sánchez recalled that “there is still to shed light” on ETA crimes in a speech that has served to close an act, the first of its kind to be held in Europe, which has sought to “reinforce the defeat” of terrorism by proceeding to the elimination of weapons that have the prior authorization of the courts. Representatives of all the police forces have attended it, including the largest of the Mossos d’Esquadra, Josep Lluis Trapero.

At the end of the speech, the representation of the Victims of Terrorism Association addressed Sánchez to reproach him for the approach of ETA prisoners. In addition to the victims’ associations -with the absence of Covite and Dignidad y Justicia-, representatives of the Judicial Power such as the State Attorney General, Dolores Delgado, and members of the Government such as the Minister of the Interior, Fernando Grande-Marlaska, have attended. and several ministers, all of them from the socialist part of the Government: Margarita Robles (Defense), Arancha González Laya (Foreign Affairs), Juan Carlos Campo (Justice), Isabel Celaá (Education) and Miquel Iceta (Territorial Policy).

“A record of the defeat of the bullets against the votes is drawn up,” Sánchez assured, alluding to the former PSOE Interior Minister Alfredo Pérez Rubalcaba. He has also referred to the “human tendency to border on painful memories”, with special mention to young people due to recent studies that indicate that many do not know who Miguel Ángel Blanco was. “The victims unfortunately will continue to be victims of this unreason,” he said.

In this sense, Sánchez has called to “not change the past” claiming the “defeat” of terrorist gangs such as ETA. “They did not have the firmness and resistance of citizens,” he warned, betting on “fighting against forgetfulness and ending fear to continue building the path of peace.” “Memory does not belong to terrorists,” he said before showing his support for the Memorial Center for the Victims of Terrorism.