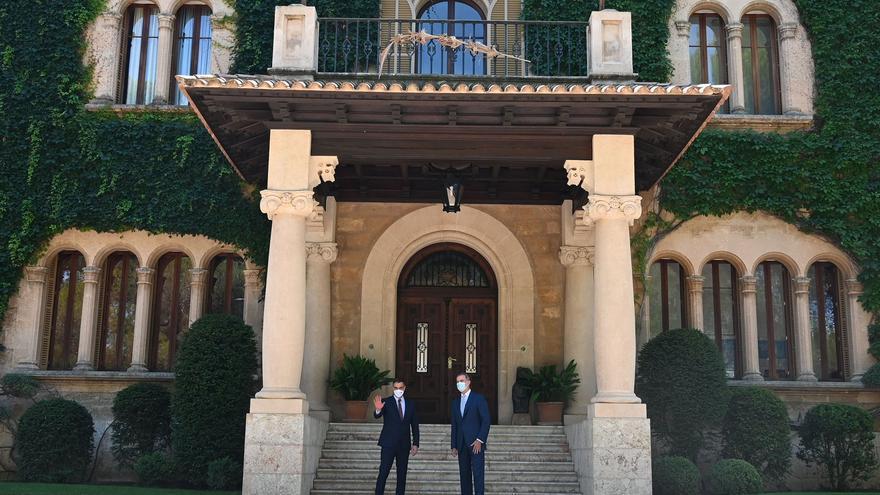 The President of the Government, Pedro Sánchez, had two opportunities on Tuesday to comment on the situation of Juan Carlos I and the desire to return that the previous monarch sends through third parties. But at his last press conference, prior to his summer breakAfter meeting with the current king in his traditional summer office at the Marivent Palace in Mallorca, Sánchez chose to avoid the two questions they asked him about the emeritus.

Juan Carlos de Borbón He has fled Spain for exactly one year after his departure, in August 2020, in the midst of the pandemic and a few months after the cases opened in court for the allegedly illicit origin of his fortune, which led his son to withdraw the assignment that corresponded to him as a member of the Royal House and to renounce his inheritance, just one day after the Government decreed the state of alarm and confinement.

While Investigations by the Public Prosecutor’s Office and the Treasury surround his opaque fortuneIn recent months, Juan Carlos I had expressed to his relatives his desire to return to the country of which he was head of state for 40 years after having carried out two fiscal adjustments. This Tuesday, however, Sánchez cooled any possibility of the return of the former monarch and ignored the delicate situation of Juan Carlos I, who currently resides in the United Arab Emirates.

The chief executive decided to focus on praising once again King Felipe VI, whom the president and the socialist wing of the Government They have been trying for more than a year to distance themselves from their father’s alleged irregular activities, with the aim of safeguarding the image of the Spanish monarchy. The issue pits them against their coalition partner, United We Can, which openly criticizes the flight of Juan Carlos I with harsh words and demands the beginning of a social debate that culminates with the proclamation of the Republic in Spain.

“During these 12 months many things have changed,” said Sánchez in his appearance in Mallorca, recalling the evolution of the pandemic and the economy. “But the government’s commitment to constitutional institutions has not changed, from the first to the last,” he settled before the first question from the press about whether he considered that the emeritus king should return to Spain. Sánchez continued highlighting that the current king “is committed to updating and making the Royal House more transparent.”

Next, another journalist was interested both in the opinion of the President of the Government about the return of Juan Carlos I and in knowing if that matter had been one of those addressed by Sánchez and Felipe VI in their brief meeting this Tuesday. “We have not addressed it,” the chief executive settled, who, at the insistence of the press, repeated: “I value very positively the exercise of transparency and updating of King Felipe VI.”

Nor did Sánchez want to enter to assess or respond to the words of one of his ministers, the leader of Podemos, Ione Belarra, who is in charge of the portfolio of Social Rights and Agenda 2030 in the coalition government. This same Tuesday, Belarra posted a thread of tweets in which he described the flight of the emeritus king as “unworthy” and considered it a “serious democratic anomaly”.

“It is a year since Juan Carlos de Borbón fled to Abu Dhabi. When our country was having the worst time in the fight against the pandemic, the former head of state left Spain in an unworthy attitude so as not to show his face for their actions before the citizens, “Belarra pointed out. “To the facts that we already knew have been added, in this last year, revelations about new accounts hidden in tax havens, fortunes of dubious origin, possible links with arms trafficking …”, he listed.

Around the emeritus king there have been, in his opinion, “scandal after scandal of corruption and impunity.” In addition, the minister added: “While some insist on talking about ‘full democratic normality’, the flight of Juan Carlos I is, clearly, a serious democratic anomaly in Spain that produces a huge discredit of the institutions.”

The head of state is one of the issues that generate differences within the coalition of PSOE and United We Can since the signing of the agreement, in January 2020. Faced with the caution of Sánchez and the socialist ministers about the alleged irregularities of Juan Carlos I, the ministers and leaders of the confederal formation do not hesitate to denounce them and claim responsibilities from the former monarch, as well as greater transparency and accountability to the current Royal House.

On the other hand, the socialist wing, the majority within the Government, avoids direct criticism of the supposedly illegal actions of the King Emeritus. This Tuesday, after the last Council of Ministers of the political course, the spokesperson for the Executive and Minister of Territorial Policy, Isabel Rodríguez, also refused, like Sánchez, to assess the statements of Belarra, her partner in the Government. “Each one is responsible for their statements,” he said. Like the president, Rodríguez highlighted the government’s “recognition” of the “transparency and exemplary nature” of Felipe VI.

This “transparency” of which the Executive presumes collides with the fact that the official accounts of the Royal House do not reflect the real cost of the monarchy for the Spanish public coffers. What elDiario.es has been revealing in recent weeksAlthough the official budget allocation for the Head of State is 8.4 million euros, ministries such as the Presidency, the Treasury, Defense or the Interior bear a large part of the staff costs of the Royal Household. According to the information compiled by this newspaper, part of that spending exceeds 14 million euros, although it is still a figure well below the real one because some ministries do not reveal all the money they allocate to the monarchy.

In July of last year, when the evidence that the former head of state amassed a fortune for which he did not pay the Spanish treasury – which has led him in recent months to carry out two million-dollar tax regularizations – became known, the wing Socialist government began to raise pressure on the emeritus king with one goal: to save the image of Felipe VI. Since then, the priority of Sánchez and his team has been to underline the difference in exemplarity between father and son, highlighting the measures that Zarzuela has already adopted -such as the publication of his accounts- and to push for the royal family to continue on the path of total distancing with the emeritus.

“The whole of the Spanish population is witnessing disturbing information that disturb us all, me too. And I would like to share the following: the first thing is that there are some media that do not look the other way, on the contrary, they are echo of that information. Secondly, there is a justice that is acting and, thirdly, and this is something that I am grateful for, the Royal House itself is distancing itself in the face of such disturbing and disturbing information and that is something that I appreciate ” , Sánchez said in July 2020, trying to highlight those differences between Juan Carlos I and his son Felipe VI.

Later, Sánchez bet in an interview published by elDiario.es and infoLibre due to the disappearance of inviolability as one of the formulas for differentiation with the previous stage, given that this figure is the one that prevents Juan Carlos de Borbón from being investigated in the stage prior to the abdication. “The Spanish Constitution has to evolve in accordance with the demands of exemplary and political conduct of societies,” said the president.

The explanation was that if it had been proposed that the examinations of public offices be limited exclusively to the exercise of functions, the same would happen with the king, who enjoys a privilege of inviolability that no other citizen has.

A year after these declarations, the Government is reluctant to promote this reform – the PSOE, in fact, voted together with PP, Vox and Ciudadanos against an ERC bill that urged the Executive to materialize it – in the face of the divisions that arise in the Council of Ministers between the socialist wing, which trusts Felipe VI to promote greater transparency of the Royal House, and that of United We Can, which calls for a Crown Law that regulates the rendering of accounts and the relationship of the kings with justice, but that Sánchez and his closest team do not just see with good eyes.