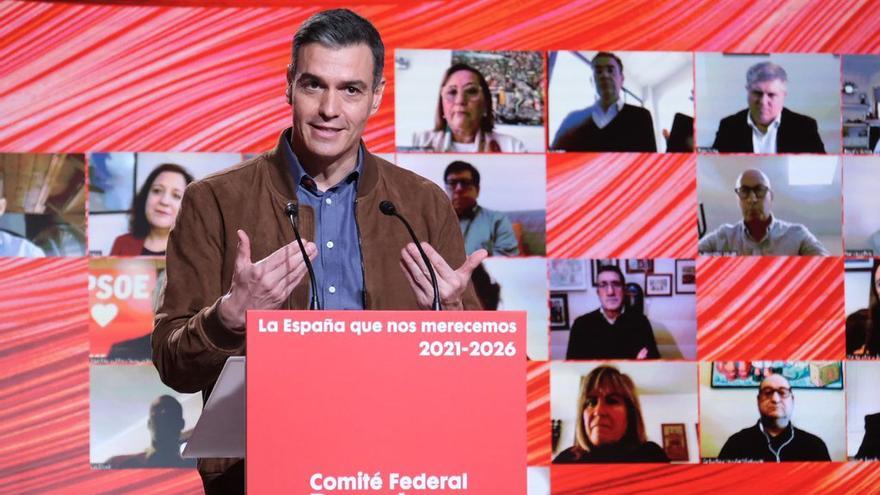 The PSOE today sets the date for the 40th Congress that will be held in mid-October with the view that it is a boost for Pedro Sánchez near the halfway point of the legislature, but above all that he leaves the pandemic behind. Sánchez himself has ensured that this year will be the year of “vaccination and recovery” and has been confident that Spain will be able to “exceed” the 70% immunized population in summer. The socialist leader has taken advantage of his intervention before the party’s Federal Committee to claim that process launched as an example of “solidarity” in the face of “privilege” when there has been a trickle of public officials that have skipped the protocol. In addition, the event held blended in Barcelona has been the starting gun for the Catalan campaign and the president has issued a warning to the independence movement: “It is useless that they continue trying tricks: when their time has come, the change can be postponed , but change cannot be prevented. And the change is called Salvador Illa “. He has also taken the opportunity to vindicate the PSOE as the possibilist left and has sent several messages to Pablo Iglesias, among them an enhancement of the “true” exile before his words on the departure of Carles Puigdemont: “Yesterday’s sacrifice and resistance are the basis of our democracy today.”

Before the highest body of the Socialists, Sánchez has admitted that things could have been done “better”, but has vindicated the work of the Executive during the health emergency as well as the implementation of a “social shield” to protect citizens . In any case, he has made a speech based on the “hope” that the vaccine against COVID-19 supposes. “We must promote it with all our strength,” said the secretary general of the PSOE, who has assured that “it symbolizes progress against superstition”, “science against ignorance” “public service against money”, “Europe against nationalist egoism” and “hope versus fear.” In the middle of this list, Sánchez has indicated that it also supposes “solidarity against the order of privilege.”

Those words come a day after the PSOE has demanded the resignation of his public positions that they skip in order of vaccination, as has happened with a handful of councilors. The organization has provisionally suspended them from membership, but asks them to go one step further by resigned from their public position. The petition came while the Minister of Defense, Margarita Robles, awaits explanations from the Chief of Defense Staff (Jemad), Miguel Ángel Villarroya, who was vaccinated within a process launched by the Armed Forces and which contemplates the administration of the vaccine to military health personnel and “exceptional cases” that the Executive does not clarify. For now Interior has dismissed the Civil Guard who benefited from this procedure.

“The change is called Salvador Illa”

The Socialists have chosen Barcelona for the celebration of that conclave at the gates of the Catalan elections and Sánchez has taken the opportunity to praise the “generosity” of Miquel Iceta for leaving and giving way to Salvador Illa, considering that he has a better chance of reaching the Generalitat . “Whoever had the right to be a candidate gave up being one and whoever did not aspire to accepted it without ambition. This is called generosity,” he praised. “Illa is the man that Catalonia needs,” said Sánchez, who has thrown several darts at the independentists by assuring that the claim of the still Minister of Health is “to serve the Catalans and not use the Catalans.”

Sánchez has clearly referred to the Government’s unsuccessful attempt to delay the elections to May 30. “There has been much discussion of dates, they are the least, the important thing is respect for democratic rules,” said the president after the Superior Court of Justice of Catalonia has suspended the postponement: “It is useless that they continue trying tricks : When his time has come, the change can be postponed, but the change cannot be prevented. And the change is called Salvador Illa. ” Sánchez has been full of praise for the PSC candidate: “He is a sensible, hard-working, intelligent man and above all a good man.”

Also the intervention of the leader of the PSC, Miquel Iceta, has been open and has taken the opportunity to bet on the management of Illa against a “divided and aimless government.” “Next February 14 the choice is clear: either president Illa or more decadence, more incompetence and more of the same. Salvador, not only is a partner and friend, which would be more than enough, he is the president I want for Catalonia, he is the president that Catalonia deserves, the president that Catalonia needs, “said Iceta.” We will have a unique opportunity to make up for lost time to have a better country, a first-rate Catalonia, to do well what we have done wrong. ” “We have always wanted a first-class Catalonia and with Illa we will have it. Now Salvador Illa suits us all”, has settled Iceta.

Illa has confirmed that in the next few days he will focus “101%” on the campaign – he will leave the ministry when it formally starts – and has appealed for unity against the division in Catalonia: “I am not going to waste a minute in reproaches about what what happened, I am going to dedicate all my time to what we Catalans can do together “. The PSC candidate has opted to try to seduce the electorate that the Socialists have lost in recent years and also the one that has never voted for them and has positioned himself as “the candidate of all the people who want to turn the page and want to move forward.” “I do not intend to settle accounts with anyone, I believe in a Catalonia without revenge”, he has expressed.

“The last has been a decade in vain, lost and we have all lost out. No one should feel proud of what has happened. The solution will not come from one party overwhelming the other but from an overcoming, restorative feeling that comes from what Deeper within ourselves. Division has weakened us, on the other hand, union will make us strong in the face of fear, decadence and the uncertainty that the virus has brought, “Illa concluded.

Sánchez’s speech, which has lasted for more than an hour, has served him to vindicate the work of the socialists during the management of the pandemic – especially from the Government and regional executives, but also in the opposition – and mark the The course for the “recovery” that Spain will have this year and which, as he explained, will be one of the “master lines” that the PSOE will have to address at the 40th Congress in October as well as lay the foundations for the country’s transformation.

At a time when friction within the coalition has multiplied and the attacks by United We Can are causing more and more unease in the socialist ranks, Sánchez has vindicated the formation he leads. “More than a century ago we understood that the barricade is not a way,” he said before continuing: “We are the left that never abandons the path of politics and persuasion, however slow and difficult that path may be, to to travel other roads that never lead to the promised paradise “. There he has referred to “possible paradises that nobody gives away and are paid for with taxes” such as health, education or salaries and pensions that move away from the “indigence” that force the “accounts to balance.”

“We are the left that does not give up when things are not exactly as we dream, the left that insists and persists in dreams without ceasing to advance in reality – he added -. We are the left that is committed to the unity of the left” . After several enumerations along these lines, Sánchez recalled that the last congress of the Socialists – in which Susana Díaz was imposed – was “that of militancy” and has ended with the motto that he raised then: “We are the left.” “We all know what it means,” he has encouraged his people.

“The sacrifice of exile and the resistance of yesterday are the basis of our democracy today,” said Sánchez. We have a debt with those people. ” The president has assured that this means “honoring his memory” but above all “complying with and defending the rule of law and democratic laws, that is, the Constitution.” And there he has also vindicated the PSOE as a party that has survived “true exile for defending democratic legality and for fighting a dictatorship as illegitimate as it is despotic.”

The fire burns more than 37,535 hectares of forest area since the beginning of 2021