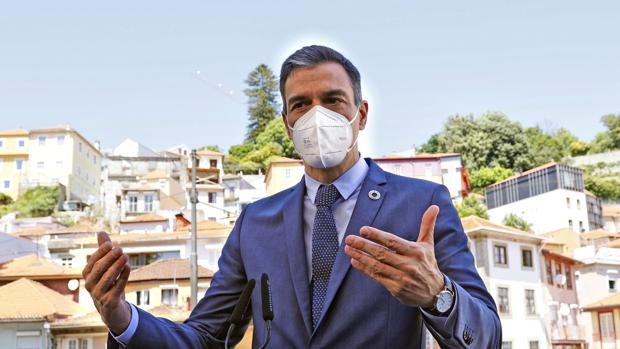 The President of the Government has had very harsh words directed implicitly to those responsible for the banks and their salaries and has appealed to the EU to give “a forceful response” to this fact. At the European Social Summit held in Porto, he spoke in the session dedicated to employment, in which he also implied that he totally discarded the revocation of the labor reform as he had promised to do in different political pacts with his partners. parliamentarians, since it ensures that any modification of the legislation in this field “must be done within the social dialogue.” In his intervention in English in the plenary session in which they were in addition to the political leaders, representatives of European businessmen and unions, Sánchez said that “this that we are seeing in Europe is impossible,” referring to those responsible for the banking system that he described as “Sectors that are winners of this digital transformation, that are expelling the workforce while they are earning six-figure salaries and increasing their benefits and bonuses.” The president insisted on this matter and said that “I do not think this is acceptable and I think that from the political dimension we also need to give a strong answer”, which he did not define. The President of the Government has taken advantage of his intervention to praise his management during the pandemic, saying that he has approved “important reforms in the areas of teleworking, professional training, reform of active employment policies, equal pay for men and women, ERTE, etc…”. And when talking about the future, he insisted that “in my opinion, what is crucial is that the modification of labor legislation is done through social dialogue”, which presupposes that it discards the idea of ​​a unilateral decision that implies the total or partial repeal of the labor reform approved by the Government of Mariano Rajoy and that his party had promised to eliminate in its pacts with Podemos and Bildu. In the recovery plan sent last Friday to the European Commission there is no specific reference to changes in labor legislation. The European Commission had presented at the beginning of March a ‘social action plan’ with objectives to reinforce social cohesion after the pandemic with three objectives for 2030: increase the employment rate in the whole of the EU to 78%, train the 60% of adults each year and reduce the number of people at risk of poverty or social exclusion by 15 million. The Portuguese Prime Minister, Antonio Costa, who calls this meeting as the EU’s six-month presidency, said yesterday that the objective is “to place the social pillar at the center of the European debate.” The president of the Commission, Úrsula von der Leyen, added that “the Social Summit comes at the right time because we have all had a very difficult year due to the pandemic” and it is necessary to rebuild the economy with a social perspective. It is a face-to-face summit that has been possible because Portugal has good epidemiological data at the moment, although two of the 27 heads of government, the German Angela Merkel and the Dutch Prime Minister, Mark Rutte, have not wanted to travel to Porto to follow the meeting by teleconference. The summit continues today and will culminate with a telematic meeting with Indian Prime Minister Narendra Modi. Turn his back on the press Although it has been customary for the president to always appear after a face-to-face summit, the Government has announced that no contact with journalists is required. According to sources from Moncloa, Sánchez wants to present himself as a leader who takes his country “to the forefront of social rights” and, although he is also the one who heads all unemployment statistics, he will present to the other countries a proposal on employment that the government itself describes as a “deep and detailed” document. .