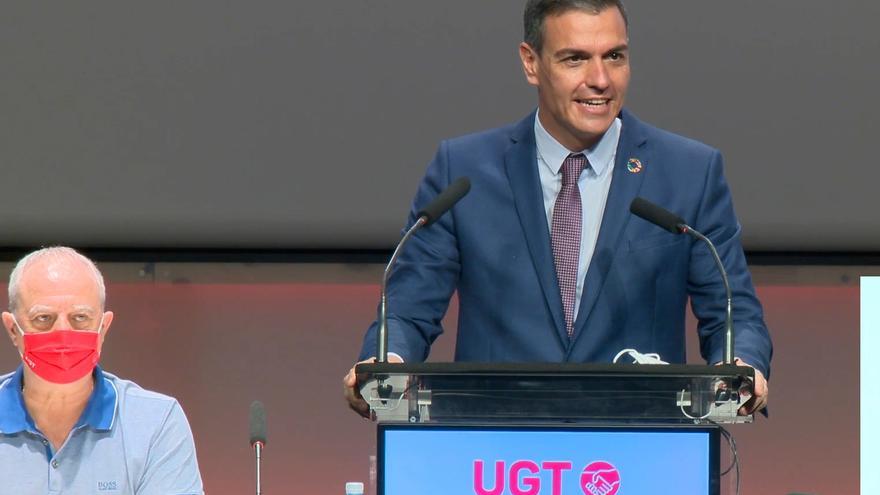 Pedro Sánchez has charged against “the winning sectors” that have millionaire salaries of their executives because the economic situation allows them “to grow as dividends and bonuses have done” while announcing “massive layoffs.” The President of the Government made that declaration of war shortly after the Government accepted the merger of Bankia and Caixabank and the largest ERC with 8,300 layoffs was presented to the unions. “We cannot allow it,” Sánchez said in his speech during the UGT Congress in which he promised to work with the centrals to “mitigate” these collective layoffs in those sectors that are doing well.

The expectation of the president’s intervention in the union conclave was fundamentally his words on the labor reform of the PP, which the third vice president, Yolanda Díaz, has reiterated that she intends to undertake before the end of the year. “As it has been received, the UGT expects a lot from its government, I have come to think that it had under its arm the repeal of the labor reform,” joked the member of the table who announced the intervention of the president and the secretary union general, Pepe Álvarez.

Sánchez has acknowledged that there are those who tell him that he has to talk about repealing the labor reform with those terms, but has explained that it is not only about “dismantling” what the PP did but also about “advancing” in the recognition of new rights . “When we are talking about changing the labor model of course we have to repeal many things that the PP did, but update others,” said Sánchez, who has reiterated the Government’s commitment to promote a new Workers’ Statute.

It has also taken advantage of its presence in the UGT Congress to announce a shock plan against “imminent” youth unemployment with which it will provide 600 million euros to the autonomous communities “to finance training contracts that provide employment and training opportunities for young people. under 30 years old ”. Another 765 million in three programs will be dedicated to youth employment through the First Professional Experiences Program, the Investigo Program, “to promote research and technology and retain talent” and a training program focused on professions related to ecological transition and green economy ; digitization, social cohesion and the fight against depopulation.

The UGT leader had previously claimed in his speech “job stability” not only because of the companies and the production model but also because of the “people in a precarious situation”, who said that they are not only young people and women but also those over 45 years old.