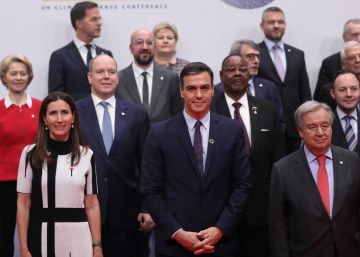 With calls to act urgently and ambitiously to curb global warming, this Monday started the Climate Summit (COP25) which is celebrated in Madrid. "The world is watching us. It is time to act," said Chilean Minister of Environment Carolina Schmidt Zaldívar during his inaugural address, who chairs this meeting even though his country resigned to host it as a venue due to social protests. For his part, the president of the Spanish Government in office, Pedro Sánchez, has called for "in a time marked by the silence of some countries," Europe, "which led the industrial revolution," be "who leads the Decarbonization "," by elementary historical justice. " "No one can escape this challenge on their own. There is no wall to protect any country, no matter how powerful," added Sánchez.

"You have to go further. And above all do things faster. Either we put a turning point or we will not leave the point of no return," said Sanchez. The President of the Government has assured that Spain "will increase the rate of emission reduction" through "a green pact consistent with the objectives set by the European Union. In this line, the President of the European Commission, Ursula von der They read, has ensured that "the Green deal European will mean a reduction in emissions, improvements in the quality of life and job creation. "" We need to invest in innovation, in green technologies, and for this we need a European investment plan with a billion euros for the next 10 years ", said the German. "Next month we are going to make a proposal, the first European law of transition towards climate neutrality so that this becomes irreversible," he recalled.

The UN Secretary General, António Guterres, has demanded from the main pollutant emitting countries "the political ambition that people ask of us. Doing less will be a betrayal of the whole family and future generations." Sánchez, stressed that "the battle against climate change requires moving from words to deeds." "For years, versions of climate denial circulated. Today, fortunately, only a handful of fans deny the evidence," he added.

Indeed, during the opening ceremony, scientific evidence on the effects of climate change has been very present. "Our assessment indicates that the impacts of warming are much more serious than we thought before," said Hoesung Lee, president of the IPCC, the international panel of experts advising the UN. "If we continue along the current path, we run the risk that the temperature will rise and this will have a terrible effect and consequences on humanity and threaten our existence," he warned. Lee has been critical: "We are not doing enough. Nor do we approach what would be enough to dominate this situation."

The main objective of the Paris Agreement, signed in 2015, is that the increase in the average temperature of the planet does not exceed two degrees Celsius with respect to pre-industrial levels, and as far as possible it does not exceed 1.5. That is the limit that science sets to avoid the most catastrophic effects of a warming that can no longer be reversed. Scientific studies warn that countries are not at all well on track to meet the Paris goals: they must multiply their cut plans by five to achieve the goal of 1.5 degrees and by three for both grades.

"The most recent data of the world meteorology have revealed that we have reached unthinkable limits. We have passed and very much," said Guterres. "Do we want to be remembered as the generation that was like an ostrich while the planet was burning?", He insisted, before heeding the catastrophic effects of what scientists warn. "The last five years have been the hottest ever, there are more extreme weather disasters, hurricanes, droughts, floods, fires, polar ice caps and permafrost melt. Antarctica is reduced three times faster than expected." , has said. "Three important reports from the IPCC confirm that we are destroying the systems that keep us alive. The plants that burn coal continue to be built. Either we put an end to it or the efforts against climate change are destined to fail," he urged.

"We are contemplating a rise in temperatures from 3.4 to 3.9 degrees by the end of the century. The only alternative is a quick action by all countries," continued the UN Secretary General. "A green economy should not intimidate us, it is an opportunity that can help us achieve all the goals of sustainable development. But we are frustrated by the slow pace of change. That is why I beg you to increase your ambition and your sense of urgency." Guterres has called for this summit, held in Madrid until the 13th, to resolve one of the pending fringes in the negotiations to develop the Paris Agreement, Article 6. This article refers to exchanges of rights or units of greenhouse gas emissions between countries, and it is also the only one of the entire agreement that refers to the private sector, since it opens the door for companies to acquire them. "It is essential to put a price on carbon if we want to avoid a galloping climate change," Guterres recalled.