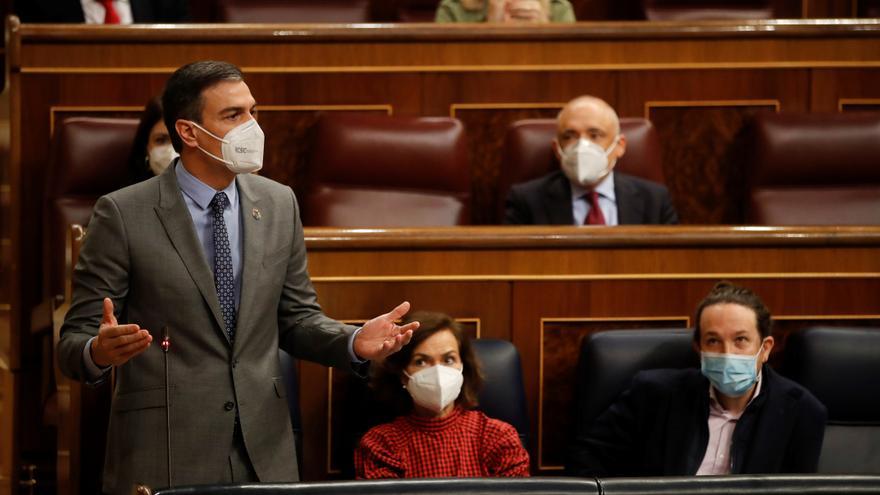 The President of the Government, Pedro Sánchez, has telephoned this Wednesday the president of the PP, Pablo Casado, to address the renewal of constitutional bodies such as the General Council of the Judiciary (CGPJ), which has been in a temporary situation since 2018 due to the blockade of the PP, which has so far refused to close an agreement with the Executive using different arguments. This position of the popular has made the highest body of judges, which continues to appoint magistrates to the Supreme Court, maintain the conservative majority agreed by socialists and popular when Mariano Rajoy ruled with an absolute majority.

The call, however, has not served to unblock these renewals since, according to sources from the national leadership of the PP, Casado has maintained his “conditions”, which include excluding United We Can from the negotiation despite being one of the members of the Executive. “We maintain our position. And what we have done has been to respond to the president’s call and reiterate our conditions,” they say in Casado’s team.

To all the demands that were already on the table, the leader of the PP has added the need for an electoral reform to address the problem of the requested vote, a name by which the demand that Spaniards abroad must demonstrate in the respective embassies their desire to vote as a prerequisite for being able to participate in the different electoral processes. “Pablo Casado has reiterated his conditions for the reinforcement of the independence of the constitutional organs, the neutrality of the public media and the consensus for the reform of the electoral law,” explained PP sources.

As sources from the national leadership of the popular have confirmed to elDiario.es, that reference to the electoral law refers to the requested vote. Casado’s team considers that “the current system is very complex” and, therefore, its objective “is to reform with consensus and guarantees.” Moncloa sees that consensus as feasible.

Likewise, Executive sources have indicated that the two leaders “have had a constructive telephone conversation this afternoon on institutional strengthening” that, in the opinion of Moncloa, “Spain needs. “President Sánchez and the leader of the PP have spoken, among other matters, of the renewal of constitutional bodies whose mandate has expired, such as the General Council of the Judiciary, the Ombudsman and the Board of Directors of RTVE, as well as the vote requested for Spanish citizens residing abroad “, they have explained from the Presidency of the Government.

The conversation between the chief executive and the leader of the opposition comes three days after the Catalan elections in which the PSC was the most voted force and the PP suffered a strong debacle, losing one of its four seats, achieving the worst result of its history in Catalonia and being transferred by Vox, which tripled in the number of seats.

Sánchez asked Casado to be “a useful opposition”

This same Wednesday, early in the morning, Sánchez and Casado had maintained a new scuffle in Congress, in which the Prime Minister had asked the leader of the popular to resume negotiations to renew the CGPJ and other constitutional bodies. “You have to choose: either the path of moderation or the path of perdition, useful opposition and a sense of state or opposition in which your complex is seen in the face of the extreme right that Vox represents,” Sánchez told the leader of the PP, who had maintained a string of reproaches and accusations against the coalition, especially against Pablo Iglesias.

“My task as president is to guarantee political stability,” Sánchez answered Casado’s question as to whether he is going to dismiss his second vice president. I understand that he is leading the opposition and that he has to criticize the Government of Spain, but I would like him to assume a useful opposition role, that will pitch in, that fulfills its constitutional obligations that the CGPJ, the Ombudsman or the Constitutional Court renew “.

“Spain needs a government that guarantees political stability and needs a useful opposition that is not under the influence of the extreme right,” Sánchez asked him, referring several times throughout his speech to the need for PP and Ciudadanos to uncheck of the extreme right just two weeks after stating that Santiago Abascal had “more sense of state” that the head of the opposition for having saved the decree law of European funds.

During his speech, Casado had asked Sánchez to “follow the example of Draghi,” the new Italian prime minister, “or he will end up like Tsipras,” the former left-wing Greek president, and has demanded that Vice President Iglesias dismiss, “as they have requested 200 personalities from the left “, alluding to the manifesto signed by former socialist leaders such as Joaquín Leguina or Nicolás Redondo Terreros. “His government is the cabin of the Marx, they are faced in internal struggles over housing, pensions, labor reform, trans law, the Sahara, Russia or Bolivia,” the leader of the popular reproached the chief executive.

No progress for unlocking

“And to sustain that chaos he has many dishes in the air,” Casado has ironized, before asking Sánchez how he is going to resume “his courtship” with ERC “keeping his grip with Vox and his pact with Bildu.” “Not by sending Illa to Catalonia do 90,000 dead disappear, nor with Calviño in Brussels do five million unemployed evaporate,” continued the leader of the PP.

It is in this climate of distance and total confrontation that Sánchez’s call to Casado has taken place, which according to both parties has remained cordial, but in which, for the moment, they have not reached agreements to advance unblocking the renewal of institutions that have been in a temporary situation for months.