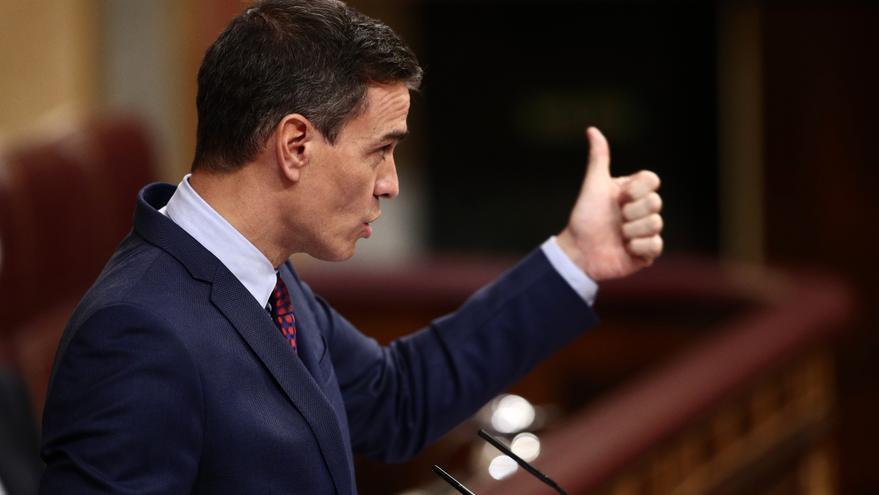 The President of the Government, Pedro Sánchez, assured this Wednesday, during the control session to the Executive in the Congress of Deputies, that the leader of Vox, Santiago Abascal, “shows more State responsibility than the leader of the opposition”, the president of the PP, Pablo Casado, for the abstention of the extreme right that allowed last week the validation of the decree on European funds that will provide Spain with 140,000 million euros to face the pandemic.

“They vote no on the Budgets, on the state of alarm, on the governance of European funds. You are apparently so moderate that even Mr. Abascal gives you lessons on responsibility with a sense of State,” Sánchez told Casado, during the debate that has taken place between both leaders after the question sent by the leader of the PP to the Prime Minister about the state of Spanish politics. “In some flashy moments you show more State responsibility than the opposition leader,” Sánchez told Abascal minutes later.

Previously, Casado had accused the chief executive of “painting his Frankenstein government green” for the aforementioned abstention by Vox in the decree of European funds. “So much talk about the photo of Colón, he has gotten into the photo of the capitol, any day we see him with bison horns,” ironized the leader of the PP during his speech, very critical of the government’s management.

In his opinion, “to hide this game of trileros”, Sánchez “destroys the constitutional consensus.” “Stop setting fire to everything to hide your negligence, stop playing the lyre while everything burns. Spain does not deserve a president like you,” he stressed.

Rufián: “They are not going to turn the Generalitat into a Moncloa office”

The Catalan campaign has sneaked into Congress again again, this time in the control session. ERC spokesman Gabriel Rufián has reproached the president for prioritizing “votes over life.” “Your judges have called the elections but I assure you that the Catalans will decide who wins and I can assure you that you are not going to turn the Generalitat de Catalunya into a Moncloa office,” said Rufián, who has thus staged the break with Sánchez.

The Republican spokesman, who has been very critical of the PSC’s opposition to delaying the elections to May, recalled that the Basque and Galician women were delayed with an incidence of 184 cases per 100,000 inhabitants while the Catalan elections continued with an incidence of about 600. However, the elections in Euskadi and Galicia, which were held in July, were scheduled for the beginning of April, when the entire country was in home confinement due to the outbreak of the pandemic. “If it were funny, I would say that the ‘Illa effect either is voted in Catalonia or does not win is a yogurt that expires or is a deodorant”.

Sánchez has taken the opportunity to praise the PSC candidate and to stir up the independence movement by reminding Rufián that the elections are on February 14 due to the “impossibility” of ERC and JxCat to find a president after the disqualification of Quim Torra. “It seems counterproductive to me that the only thing that independence can offer is more of the same to what the Catalans have suffered during these last ten years,” said Sánchez before concluding: “I hope there is a change in Catalonia, turn the page, look to the future and stop looking at the past. ”