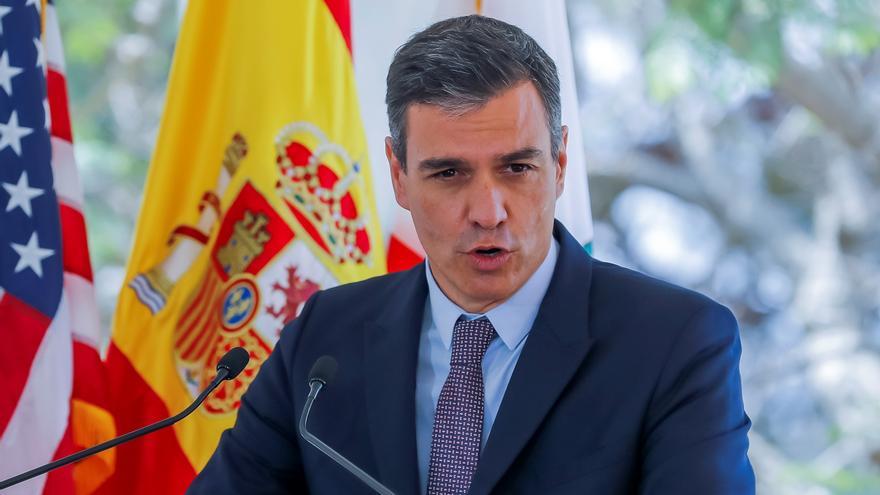 Los Angeles (USA), Jul 22 (EFE) - The President of the Spanish Government, Pedro Sánchez, presented this Thursday at the studios of NBC Universal, and before a group of executives from companies such as Netflix and HBO, his plans to turn Spain into the "Hollywood of Europe".

Sánchez outlined in Los Angeles (USA) the pillars of a plan to which he will allocate 1,603 million euros to strengthen the Spanish audiovisual sector, which includes tax advantages for productions that decide to locate in Spain and the issuance of a special visa for expedite the arrival of professionals.

"Spain has all the necessary administrative and fiscal incentives, in addition to all possible landscapes, to receive new projects and create new narratives. We aspire to become, if you allow us to compare, the Hollywood of Europe," he said.

Sánchez's words came after a meeting he held with heads of Netflix, HBO, WarnerMedia, Disney and Activision within the second stage of his economic tour of the US, which he will end on Friday with a visit to several companies technology located in the San Francisco area.

"The information and entertainment platforms have become the window from which millions of people look at a new reality. They have revolutionized entertainment," he valued.

The president gave an example of the international success of national productions, such as "La Casa de Papel" and "Elite", as well as foreign fictions such as "Game Of Thrones", whose filming has boosted tourism in parts of the Basque Country and will return to Spain in the fall to film its prequel, "House of the Dragon."

But in addition, Sánchez wants to take advantage of the Brexit situation to overtake the United Kingdom in the audiovisual career and, therefore, he celebrated that ViacomCBS (owner of Paramount) has moved its production center from London to Madrid.

"Numerous cross-border TV providers established in the UK before Brexit have now moved their operations to Spain, including our hosts today, NBCUniversal, Sony and Disney, just to name a few," he noted.

A series of movements that have made Spain "the second country in the European Union, behind Germany, with the most hours of fiction produced".

The audiovisual plan is part of the Recovery, Transformation and Resilience Plan of the Spanish economy and will also take advantage of the improvements in technological infrastructure prepared by the Government.

Another axis of actions includes providing assistance and support to potential investors, both foreign and Spanish companies interested in internationalization.

The goal is to achieve a 30% increase in audiovisual production in Spain by 2025.

Sánchez began his schedule in Los Angeles with a visit to NASA's JPL Jet Propulsion Laboratory.

The objective was to promote Spanish technology in the aerospace field, to which the Spanish Government intends to pay special attention with specific projects within the aforementioned Recovery Plan.

Accompanied by the mayor of Los Angeles, the chief executive toured the laboratory's control center, responsible for the latest missions to Mars.

Several of the components of the robots used in these missions have been manufactured in Spain and Sánchez also spoke with the twenty Spanish engineers who work in this center.

The president then took advantage of his stay in Los Angeles to preside over an act to promote the Spanish language and culture, after the Government recently approved the opening of a Cervantes Institute center in California.

At the event, held at the University of California in Los Angeles, he affirmed that Spanish is perhaps "the most alive language in the world."

In his opinion, it is a language of "progress, modernity, future and understanding" and is "the best commercial, freedom and cultural ambassador" of Spain.

After closing his Los Angeles schedule at Universal studios, Sánchez traveled to San Francisco, where on Friday, with a visit to the Apple campus and a series of meetings with executives from various technology companies, he will end his tour of the United States. which started on Tuesday in New York.