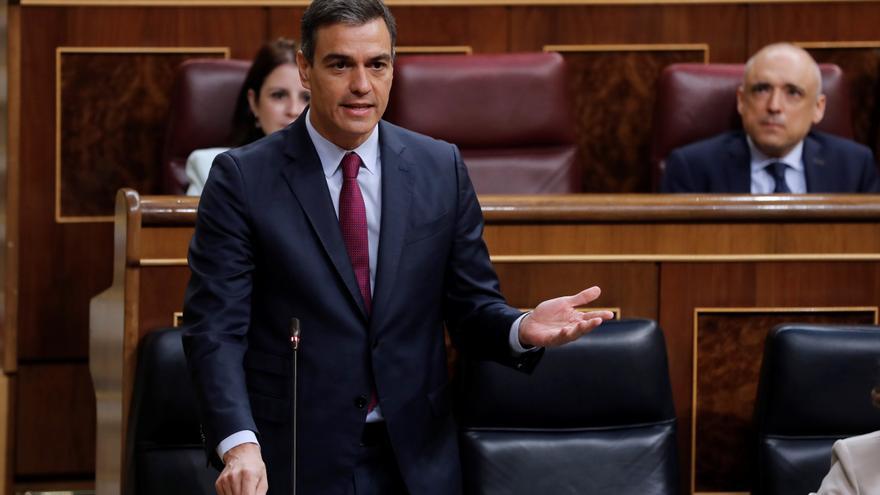 The Prime Minister, Pedro Sánchez, has asked all opposition parties this Wednesday to get “a meeting point” similar to the one reached last week in the European Council that agreed to approve funds of 750,000 million euros for rebuilding the continent after the pandemic. “Agreeing means giving in, not agreeing means losing. A common cause unites families of different colors. If in Europe you can, in Spain you must be able. We must make agreements in Spain possible,” he stressed.

Noting that during this meeting, which lasted for four days and four nights, he had to confront European leaders with “different visions” on the EU and on the European project, Sánchez has celebrated the final agreement during the plenary session of the Congress called to report on that European Council: “We have achieved a point of balance, a meeting point and it is something that I would like to appeal also in this chamber”.

Sánchez, stressed that the agreement will allow Spain to benefit from 140,000 million euros and stressed that the only conditionality that the EU raises is to implement some of the policies that the progressive Executive has already set as its objective. “What Europe asks of us is the same as we asked ourselves since the change of government with the motion of censure,” he said.

In his opinion, what the European partners are asking for is to get out of the pandemic “with gender equality, with territorial cohesion” and with policies that are committed to economic transition. “Where there were bailouts, there is a common fund; where there was austerity, there are measures for recovery; where there was a troika, there is now a dialogue between partners,” said the chief executive.

According to Sánchez, the European Council took “one more step in the success” of Europe. “Hope overcame fear, Europe found its place and has been able to give the appropriate response. When Spain proposed a Marshall plan, Europe approved a Marshall plan,” she stressed.

“Our horizon should not be to continue receiving aid, but to contribute more”

During his speech, the head of the Executive has indicated that, on this occasion, Europe “could not abandon the most vulnerable and has not.” Recovery, in his words, goes through the digitization of the economy, the ecological transition, equality and social and territorial cohesion. “For the coronavirus we will find a vaccine, but for the ecological disaster there will be no vaccine,” he warned.

For Sánchez, the funds obtained in the EU represent an “opportunity to resume the path of growth on stronger pillars to realize the objective that this government and the majority of the House made.” “Our horizon should not be to continue receiving aid, but to contribute more. Use resources to be among the countries with the lowest unemployment, with more specialized work, more training, research, more renewable energy and a more digitized economic environment,” he concluded.

Pablo Casado’s response has come in the form of linking the “triumphalism” that in his opinion the Government boasts about managing the pandemic with the outbreaks that have emerged in recent weeks. “Maybe it has had to do with relaxing social habits. Let’s end this triumphalism and let’s avoid sprouts,” said the PP president during his speech in plenary.

After the applause dedicated by the socialist party to Sánchez, the PP leader has accused the PSOE deputies of living “in a parallel reality.” “There is nothing to applaud, with 45,000 dead or seven million who want to work and cannot,” he noted, to add: “They lack the support not only of a social and electoral majority but also of other countries.” To the Executive, Casado has asked for “more humility” and “less arrogance”.