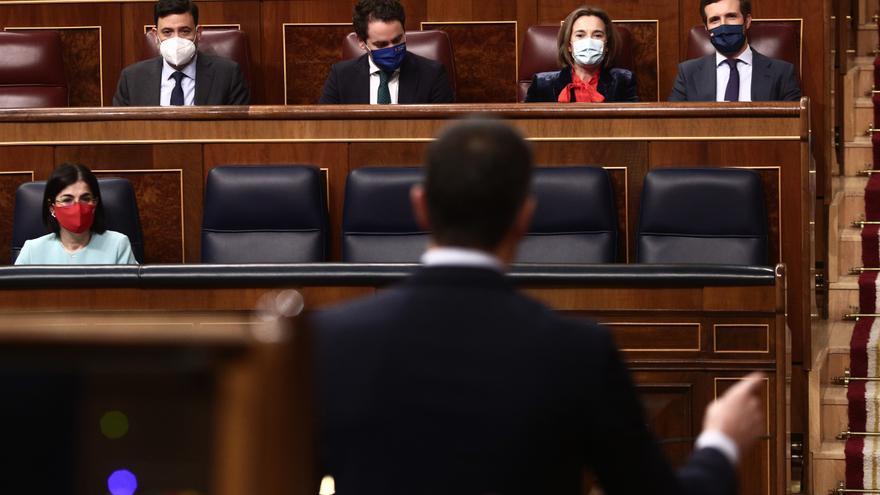 The President of the Government, Pedro Sánchez, has asked this Wednesday the leader of the Popular Party, Pablo Casado, to implement in his political formation “rules of civility and respect” after the latest attacks by popular deputies on their political opponents in the Congress of Deputies.

The chief executive has cited as examples the cry of “go to the doctor!” that last week the PP deputy for Huelva Carlos Romero spoke to the spokesman of Más Madrid, Íñigo Errejón, while he was talking about mental health. As well what the popular deputy Diego Movellán told the Minister of Labor, Yolanda Díaz, last Monday, when he assured that in United We Can women “only rise through the ranks if they hold on tight to a ponytail.”

“We want an opposition that is alternative, with loyalty not to this Government but to the country,” Sánchez assured during the control session to the Executive in the Lower House. “Yesterday I heard him say that it made him laugh when he heard that the PP has no project,” the President of the Government reminded Casado, referring to his speech on Tuesday before the Board of Directors of the PP. “It is not that funny, it makes us sad to see the PP leading the opposition,” concluded Sánchez.

Previously, the debate between Sánchez and Casado had focused on the political earthquake originated in recent weeks by the censure motions presented in the Region of Murcia and Castilla y León – both failed due to lack of support – and by the electoral advance of the elections Madrid residents announced by the president of the Community of Madrid, Isabel Díaz Ayuso, for next May 4.

“This Lent is making him very long. He would have to go out as a penitent with his candidate in Murcia and Castilla y León,” said Casado ironically. In his opinion, “not all the incense” of the “propaganda” of the Government “is capable of covering its fiascos.” “Three attempts, three failures,” summed up the PP leader, who considered “irresponsible to destabilize governments”, but “immoral to do so in a pandemic.” Casado accused Sánchez, for all this, of “playing monopoly with the institutions.”

“A bit of modesty,” Sánchez replied. “Do you look in the mirror after listening to yourself? Talk about how badly the Government of Spain works. Let’s talk about their governments. Do they give lessons about what?” For him, the PP “supports its governments on the basis of corruption and transfuguismo” and accused Casado of “provoking early and irresponsible elections” in Madrid. “Stability is built with transversal agreements,” Sánchez insisted.

Then it was the leader of Citizens, Inés Arrimadas, who asked the President of the Government about European funds and about the Executive’s rescue of the Plus Ultra airline, a question that Sánchez has avoided answering.

And the PNV spokesman, Aitor Esteban, has warned Sánchez that the trips of foreigners for leisure reasons to Spain that take place every weekend generate “perplexity” about how it is being managed. “The way in which it is being managed causes perplexity and feelings of discrimination in the citizenship that can lead to frustration. The health authorities are asking us for a last effort in the face of Easter. They appeal not to travel. There is a perimeter closure, but while both French, Germans and Italians roam freely in Madrid, Barcelona and Donosti for leisure, to enjoy the freedom that they do not have in their countries of origin “, Esteban has reproached.

“Ask your European partners for consistency. There is concern about this, but no country makes decisions,” he insisted in his criticism. The Prime Minister has assured that “Spain has followed the recommendations of the European Commission.” “The recommendations have been, for example, to keep the borders open for intra-community travel, avoiding non-essential travel. In fact, the European Commission has already said that the closure of borders did not prevent the non-spread of the virus. What we have to do is apply the controls so that there are no imports of cases and that is what Spain is doing, “replied Sánchez.