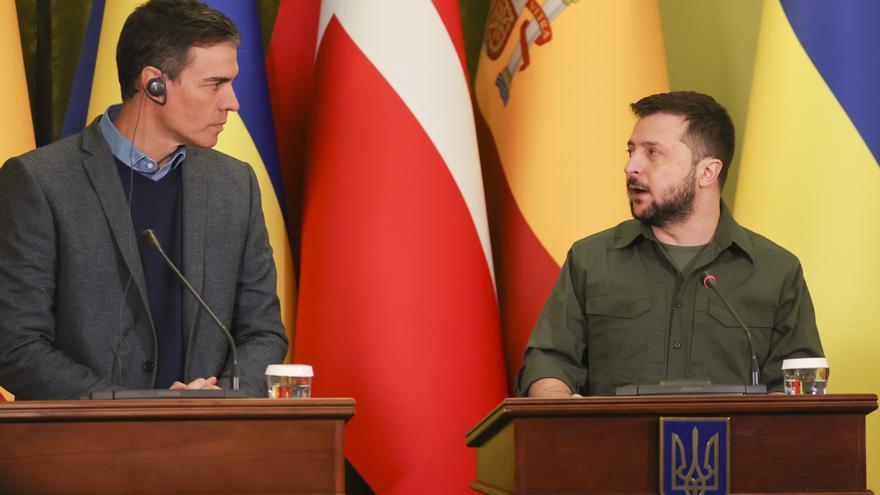 Pedro Sánchez has taken advantage of his presence before the Ukrainian president, Volodímir Zelenski, to announce a new shipment of weapons that is already on its way through the ship Isabel. This is the most important since the war began: 200 tons of ammunition and other material, 30 trucks and 10 light vehicles, according to the Spanish president at a press conference in a room of the presidential residence in kyiv in which he also The Danish Prime Minister, Mette Frederiksen, has participated. Sánchez has also assured that Spain will contribute to the International Criminal Court in the investigation of war crimes that Russia may have committed with eight experts from the Ministry of the Interior and 39 forensic experts.

"Ukrainians are not alone," said Sánchez, who wants with this visit to make clear his support for Ukraine, as other European leaders have done in recent days: "We want Putin to face responsibility for these crimes." It will be the International Criminal Court that decides the scope of the atrocities that the socialist and his Danish counterpart have seen first hand in the city of Borodyanka. Sánchez has admitted that he has "shocked" them that visit to that place that has suffered the Russian attack. "It could be a potential genocide," he added in his appearance, which was mainly in English.

Sánchez has promised on several occasions to provide all the military and humanitarian aid requested by the Zelensky government, despite the fact that sending weapons bilaterally generates discrepancies within the coalition government due to the rejection of United We Can. But from Moncloa they have always defended that foreign policy is directed by the president. In addition to the shipment of weapons, the president explained that humanitarian aid for Ukraine reaches 31 million euros. "It is the largest package that has been made from Spain for a country," he assured. Before leaving for Ukraine, the president visited the refugee reception center in Malaga -he had already been to those in Madrid, Alicante and Barcelona- and estimated that 134,000 people had arrived in Spain since February 24.

The Prime Minister arrived in kyiv early Thursday morning after an overnight train journey from Poland. Once in Ukraine, where the Danish Prime Minister, Mette Frederiksen, has also traveled, they were received by the Deputy Prime Minister for European Affairs, Olha Stefanishyna. With a strong security device and dressed in bulletproof vests, they have moved to the city of Borodyanka, about 40 kilometers from the capital. “Shocked to witness on the streets of Borodyanka the horror and atrocities of Putin's war. We will not leave the Ukrainian people alone ”, was the message that Sánchez transferred at that time through his Twitter account. After that visit, they have returned to kyiv, where they have held a meeting with the president, Volodímir Zelenski, and have appeared before journalists, whose mobile devices have been removed for security reasons. For the same reason, Moncloa has subsequently released the images that have not been broadcast live.

Moved to see the horror and atrocities of Putin's war on the streets of Borodyanka.

We will not leave the Ukrainian people alone. pic.twitter.com/OfEIa9oOTC

The visit of Sánchez and his Danish counterpart takes place within the framework of the support that European leaders want to show Ukraine in the face of the Russian invasion. The first to go to the conflict zone were the President of the European Commission, Ursula Von der Layen, and the High Representative, Josep Borrell. The presidents of Poland, the Baltic republics and the United Kingdom have also attended, in addition to the president of the European Council, Charles Michel, who took advantage of his presence before Zelensky to guarantee that the sanctions on Russia will end up affecting gas and oil, an issue that divides to the EU especially because of the resistance of Germany.