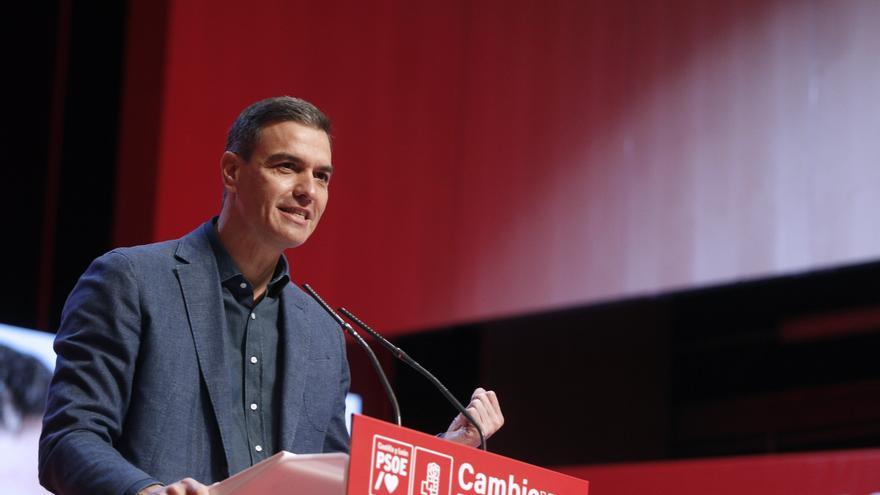 The President of the Government, Pedro Sánchez, has once again insisted that the PP would commit a "double mistake" if it votes against the labor reform, agreed with the social agents. In a campaign event in Castilla y León, Sánchez has reiterated to Pablo Casado's demands that they vote in favor of the reform or abstain from this "important agreement" between workers and businessmen.

"It is not the government's agreement, but everyone's", said Sánchez, who recalled that "it is not the agreement that the PSOE, nor the unions nor the employers would have wanted", but that is why it is the one that the workers, "because it combats the main evils of the market: precariousness and structural unemployment".

In this sense, he has also advocated not dedicating "a second to a denialist opposition that denies even reality" while "the employment legislature advances." "We have spent more than two hard and difficult years, but thanks to everyone's efforts we are beginning to reap the rewards: we are leaders in vaccination, we have the highest growth in the last 20 years, the best employment rate in the last 17 and the lowest unemployment rate in the last 14 years", he said.

And it is that, in Sánchez's opinion, "there are different ways to get out of a crisis: advancing or going backwards", since he has highlighted that with the PP each Council of Ministers supposed "one more setback and a social cut, while now they suppose a cut less and a social advance more".

In this sense, he considers that the PSOE demonstrates "that it is possible to get out of a crisis by advancing in rights and expanding freedoms": "We have recovered levels of employment prior to the 2008 crisis and it is that with the formula of social democracy we get out of faster and fairer and today we have an exemplary government with glass pockets that what it does is defend public assets".

And it is that, the change of Government supposed a new way of doing politics: "We do not impose, we agree, because we govern the social majorities and they feel better represented in the agreements than in the impositions". "The change of government has put aside corruption, cuts and social setbacks in Spain", assured the President of the Government.

In an act in which he has supported the PSOE candidate for the Presidency of the Junta de Castilla y León, Luis Tudanca, the President of the National Executive has underlined the commitment and sensitivity of the Government of Spain with the problems of communities such as the Castilian-Leonese.

Sánchez has referred to the problem of depopulation to which the Government has allocated 11,000 million euros in two years, with proposals that go through the decentralization of public institutions, such as the future ones in Soria and Segovia or the commitment to the military base of Monte la Reina, in the province of Zamora.

Regarding this military project, the President of the Government has announced that "in the near future" the Council of Ministers will declare this project to be of "national defense interest", so that it can be launched as soon as possible, with the 20 million euros that it has consigned in the current General State Budgets.