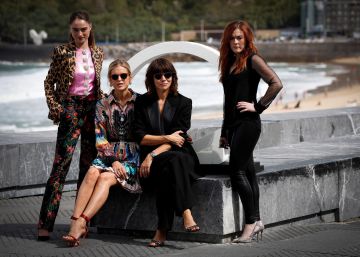 The title of this chronicle does not refer to the various sections of the festival, but exclusively to some of the obligatory vision for those of us who exercise this rare job of film criticism and known as the official section. The spectators who have come from tourism, without professional responsibilities, can have a great time watching the titles of the Pearls section every day, which shows some of the most interesting films of the annual harvest. But it happens all too often in cinema to contest that the quality of Spanish films is evident, since the most distinguished producers want to release their creatures here in the certainty that it is a good launching platform, although in some cases it can represent its grave, but also that the international cinema programming in competition, can cause you initial grief, confirmed at the end. And I know that the very enthusiastic and professional organization of the festival sees hundreds of films, which necessarily have to be possible and select from what remains, very little, since Berlin, Cannes and Venice have previously chosen the lion's share. But nothing appealing to viewers like the signer, so lacking in good taste and with reactionary and palette distrust of the unknown, exoticism, avant-garde, modernity.

For example: yesterday I did not know the director Ina Weisse, author of The audition. It portrays a very thoughtful lady, recognized violinist and demanding teacher. Her permanent neurosis, behind an appearance of a controlled and distinguished person, makes her husband, her loving patient, her distant son and her deranged pupil pass it fatal. But the description of his madness does not create exciting situations. In the outcome I feel the same as at the beginning. I am waiting for something that does not arrive. The madness of the lady leaves me indifferent. I endure it for Nina Hoss, the actress who plays her, lady who always seems to me as attractive as mysterious. He also had no news before the Polish director Malgorzata Szumowska, who signs The Other Lamb. No pleasure for knowledge. It is a poorly written and worse story about the guru of a sect in which there are only hypnotized women, on which he exercises voracious right of pernada. He rides it with mothers and daughters. They are accompanied by symbolic lambs. It is a remarkable nonsense with useless pretensions to create restlessness.

James Franco did have the misfortune of meeting him. He does not suggest anything pleasant as an actor, although he may be passable, and as a director he is infamous even though he is convinced that he is very funny. He won the Golden Shell two years ago with a metrics histrionics titled The Disaster Artist, with which the modern broke out laughing. Zeroville It is even worse. That you have three or four dollars to roll it and the collaboration of family and friends does not legitimize such dislate with cinephile pretensions talking about the love you feel for A place in the sun, Apocalypse Now, The Third Man, Joan of Arc's passion Y White House. What will they have done to deserve such an apologist? The argument ignores the sense of ridicule. The characters, dialogues and situations too.

The day of competitive cinema has been heavy.