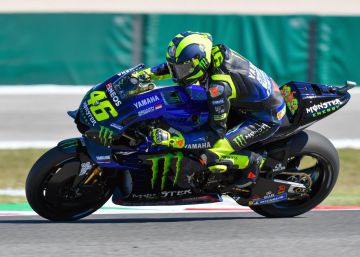 The Yamaha roll thin in Misano. The tuning fork factory managed to place its four bikes in the top five positions in the free practice of the San Marino Grand Prix. Alone Marc Márquez He managed to avoid poker. The world leader ranked third, behind Maverick Viñales and Fabio Quartararo, and had no qualms about warning: "Yamaha is doing things right." Marquez anticipates that the pole it will be a matter of Quartararo or Viñales but try to show some calm: "The important thing is what happens on Sunday," he says.

The Cervera has half a world title in his pocket, takes 78 points ahead of Andrea Dovizioso, but warns that he begins to see the wolf's ears. "Yamaha and Suzuki have worked well and are getting closer," he said after the rehearsal, with his feet in Misano but with an eye on next season. Behind him were classified Rossi and Morbidelli. Yamaha in good shape at Rossi's home equals high doses of good vibes for tiffosi.

One of the most iconic curves of the Misano circuit sports a colored escape by the work of Aldo Drudi, the artist who decorates Valentino's helmets. The designer says that when it came to expressing his mosaic on the asphalt he tried to respect the memory of Marco Simoncelli, the Italian pilot who died at the age of 24 in the Sepang circuit and who gives his name to the Adriatic track, and to collect a Palette of colors that combine the marine province of Rimini with protagonists of the Motorcycle World Championship. In the mural the rosso Ducatista with navy blue and orange tones that evoke the sun and the Honda fairing. Outside the limits of curvone, a single color monopolizes the environment: the yellow chicken that identifies Valentino Rossi and his legion of followers.

The flags with the 46 adorn balconies and courtyards of the houses that literally surround the circuit. Nearby, in the monument to tourism that is Misano Adriatic, a coastal strip filled with hotels, yellow is also imposed and references to the idol multiply. There is uniformity in the caps and t-shirts that fill the terraces of the pizzerias and ice cream parlors. In Misano Rossi he runs at home and strengthens his business. VR46, the clothing and marketing company that manages, invoices about 20 million euros and the products related to Valentino itself concentrate 80% of the business. Tavullia is the epicenter of the empire.

Rossi town It is only 15 kilometers from the circuit and its neighbors organized, in the previous Grand Prix, a tribute to the nine-time world champion. Banners, banners and an immense canvas hanging on a bell tower wall decorated the atmosphere to procure Rossi, 40, an injection of morale that brings him closer to the positions of honor, a preserve that once frequented but now seems unknown territory for he. This season he has only been on the podium twice, the last time, in Austin, five months ago, and he has not won since Assen 2017, more than two years ago. The precarrera party did not scratch details and Rossi gave himself the whim of touring the streets of Tavullia with his official M1, "a dream come true," the Doctor celebrated. Then, he drove down the highway at full speed until he reached the circuit. "I set 170 kilometers per hour," he told the press, and clarified that he got rid of the fine because traffic was expressly cut for the event.

This Friday, after training the Doctor He certified that Yamaha "is doing well on this track" and did not hide its "surprise" for the competitiveness shown. Amazement for the pilot, illusion for his fans.

Muguruza advances with firm step to the semis

The incredible response of Garbiñe Muguruza after beating Pavlyuchenkova