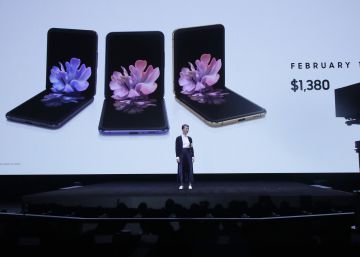 Samsung tries again with flexible screens. After the bitter launch in 2019 of the Galaxy Fold, the South Korean manufacturer presented this Tuesday at an event in San Francisco a new smartphone Folding: the Galaxy Z Flip. The terminal adopts the classic shell format already used by other companies such as Motorola with the legendary Razr. In Spain, you can book the new model in purple and black for 1,500 euros from the official Samsung website. The device will hit the market this Friday, February 14.

The company has opted for a terminal at first sight, narrower and longer than a smartphone traditional. Open, the mobile has a 6.7-inch AMOLED screen whose aspect ratio would be 21.9: 9. Outside, it has a 1.1-inch Super AMOLED panel that allows you to view the time, battery level of the mobile or date.

Once closed, the device fits in the palm of the hand. The goal of the South Korean brand is that any user can store the terminal in their pocket. "With the exclusive design of the Galaxy Z Flip and the experience it offers to users, we are redefining what a mobile device can become, as well as what it allows users to do," explained TM Roh, president at the event. and director of the mobile communications unit at Samsung Electronics.

With this presentation, in which he has also unveiled the Galaxy S20Samsung one year ahead of the next MWC with its most important releases of the year. The manufacturer took advantage of the Oscars ads, last Sunday, to reveal the design of your folding phone. The terminal coincided with that of the filtered images during the last weeks. But in the advertising space of the great film ceremony the manufacturer did not specify the technical characteristics of this new device.

The terminal has a Qualcomm Snapdragon 855+ processor, 8GB of RAM, 256GB of storage and a 3,300 mAh battery. It is equipped with a dual rear camera with two 12-megapixel sensors and a 10-megapixel front. T. M. Roh said that the mobile "can be kept open at different angles, as if it were the screen of a laptop." In this way, as he explained, it offers more opportunities when it comes to taking selfies and holding videoconferences "hands-free".

Samsung has worked with Google to design the Flex mode, which automatically divides the screen in two when the device is open. It is a bet of the brand for multitasking, as it allows you to see images, content or videos easily at the top while other actions such as reading descriptions or surfing the Internet at the bottom are performed.

The precipitous arrival of the Galaxy Fold

The Galaxy Z Flip is noticeably smaller than its predecessor. The Galaxy Fold, when open, is like a small 7.3-inch tablet. When closed, it has an external screen of 4.6 inches. The first folding mobile of the South Korean manufacturer gave much to talk before its launch to the market. Samsung intended to release it for sale in several European countries, including Spain, in May 2019. But its intentions were truncated when several Galaxy Fold ceded to American journalists specializing in technology began to fail.

The terminals presented different problems on the screen with just two days of use. To Dieter Bohn's Galaxy Fold, from The verge, a small lump came out in the fold of the screen. "I haven't used it on a beach or I shook it in a bag of chips or anything wild," explained in the same medium to make it clear that he had made normal use of the phone.

Steve Kovach, technology editor at CNBC, shared a video on Twitter that showed a constant flicker in the middle of the screen. "After a day of use ...", commented the journalist in a tweet that has been removed. Two other experts removed the top layer of the screen to think that it was a protector like the one that many manufacturers include in some of its brand new terminals.

These episodes forced Samsung to delay the sale of the device and reinforce the screen to correct manufacturing errors. The unforeseen questioned the ability of manufacturers to start marketing smartphones of this type. Finally, the brand modified the design and reinforced the protection of the flexible screen. The Galaxy Fold went on sale in Spain in October for 2,020 euros.