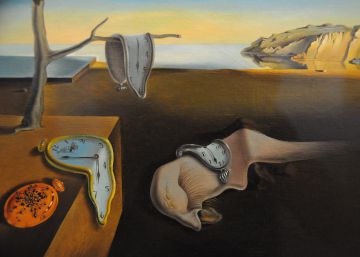 In the photo, Tamara de Lempicka looks at him with a thousand yard gaze. His folded arms confirm how little attention he is giving her. Salvador Dalí seems to explain something of utmost importance to her while she outlines a slight ironic grimace. As soon as the photo is taken, he will run away: the two artists have left enough space for the protagonist of the “conversation” to be the painter’s favorite painting, titled Chief Nun (1935-1939). They are in Julien Levy’s gallery, in New York, on April 18, 1941, at the opening of an exhibition with her work. The relationship between both migrants to the US was intense during the years in which they both lived in Hollywood, where Dalí would work for films by Alfred Hitchcock, Walt Disney and Vincente Minnelli, convinced of the emergence of surreal cinema in commercial movie theaters, after filming with Luis Buñuel, in Spain, An Andalusian dog (1929) and The Golden Age (1930).

In 1934, when the surrealist painter announced his departure for New York, he stated that he was going to work with the dealer Levy, “the man who enjoys greater prestige as an importer of novelties and who, due to his audacity, arouses more curiosity about what he does “He comments to the magazine lookout, in Barcelona. Before emigrating, he thinks of the American public –the one that ends up granting him fame and international recognition– that “he has an inferiority complex, but he places himself above everything he has never seen or before what amazes his aesthetic habits with a desire for understanding and accepting it as a phenomenon ”. In fact, he assured that the character of the Americans was more likely to understand the Surrealists, than the European. And to confirm his argument, favorable to the new clients he had in mind, he pointed to the films of the Marx brothers.

It was Julien Levy who sold to an anonymous buyer that year, 1934, what is arguably his most famous painting: The Persistence of Memory (1931). He bought it as a gift for the Museum of Modern Art in New York (MoMA). The institution exhibits on its floor the work that is the epitome of its most recognizable surrealist period, and which he summed up in one sentence to a journalist from the San Francisco Chronicle, a few months after the sale of the painting, while saying goodbye to the interview. “Surrealism has always existed because man has always believed more in his own imagination than in reality,” he said. In The Persistence of Memory it is clear that his plastic ambition is to endow the imaginative world with the same degree of objectivity and reality as the ordinary world. “What surrealism revolutionizes is the argument and to explain it I resort to the usual means of expression. It is the issues that are new ”, he clarified in another interview of that year. He made a credible dream with traditional media.

Virtual visit: The Persistence of Memory (1931), by Salvador Dalí, at MoMA (New York).