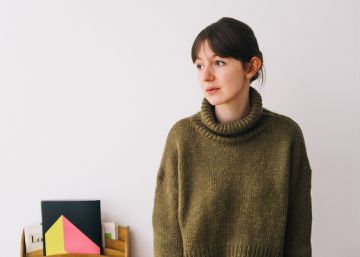 I had two jobs, one in a restaurant and the other as a preparer for university debates, I was studying for a master's degree in American cultural studies at Trinity College in Dublin, and managed to find the time to write a novel, Conversations between friends, which in 2017 captivated critics and audiences, and turned it into a shining literary star. The Sally Rooney phenomenon just set with Normal people, his next novel, which was published just a year later and is now published in Spanish. It is spoken of as the first great millennial writer, a sort of Salinger generation Snapchat. Conversations between friends It is being adapted to a television series and its books are a recurring motif in the photos that thousands of its readers upload to Instagram. Reading Rooney and publishing it on the networks, they say, has become a status symbol among those under 40. “I find it funny because I do not use the networks or those applications appear in the plot of my novels. The email itself, but that everyone uses it, even my parents, is not generational, ”says one afternoon at the end of November at the Algonquin Hotel in New York, the same where Dorothy Parker and his circle set up the legendary table round

Although they are starring in their twenties of the 21st century in a Dublin post-crisis, the truth is that Rooney's novels have something pretty classic, are stories of love, at a time when self-fiction and dystopia spread. “The novel in the Anglo-Saxon, French and Russian tradition dramatizes questions about love and marriage. Thus he was born and is a genre especially well built to sustain such dramas. Today these plots are not the ones that predominate and I don't know very well why, ”he reflects, and admits that as a reader the most powerful experience he has had has been to be dragged by the love stories of the great works. "It is not a silly, uncritical or superficial response to reading, but it is a very important part of Jane Austen, Henry James or George Eliot's books," he says. “As a reader you almost experience love for closeness, you fall in love with those characters and want them to end together. It's a fascinating desire, because you want something but not for yourself but for some people who don't exist. ”

In the love of the couple protagonist of Normal people There is tenderness and connection, but it is tinged with pain and masochism, and Rooney explains that beyond political considerations or approaches, as a novelist she is interested in issues that are irresolvable. “Class or gender issues interest me as a person, but as a writer I look for what does not have a simple answer. Physical pain is an integral part of what it means to inhabit a body and we don't know what we have to do with it, whether to accept it or transform it. The love between a man and a woman, between a man and a man or a woman and a woman also poses problems because it is hard and difficult to love other people and this is not due to capitalism or patriarchy. Although they are part of the problem, they do not describe it in its entirety. ” Before, writers were asked about whether they had feared the reaction of family and friends to what they had written, but times have changed dramatically and in view of what Rooney describes, was he worried about the public reaction he could generate to write about consensual sexual violence in MeToo times? "Yes, today the reaction of friends and family seems simple to manage," he says and lets out a laugh. “Even as a young woman writing about young women that pressure is there. I have received criticism because my characters are not a good example: they are hung by men and cry because they have not received a reply to a message. That's right, but I didn't want to create models, nor be an example of anything. There is this assumption that my characters have to live in an ideal feminist universe in which they do not internalize any of the problems of inhabiting a patriarchal society, and act independently. Those are not the novels I want to write. I don't want to fall into offensive stereotypes but I want to be free to create female characters that are not feminist robots, that have never made mistakes. ”

There is something brazen and direct in this 28-year-old Irish novelist Of discreet and modest appearance dressed in a mustard tweed skirt and a dark turtleneck sweater. Raised in Mayo County as the median of three siblings in a middle-class family, this year she enjoys a scholarship at the Cullman Center of the New York Public Library while preparing her next book, of which she has already written half. In summer she will return to Ireland with her boyfriend, a math teacher. Rooney is fast and accurate, not just writing; He has a remarkable ability to express his ideas clearly, and speaks with enthusiasm and conviction not exempt from irony. It is not surprising to know that she stood out as a speaker in the university debates and later as a preparer. “What I was trying to teach is how to structure the arguments, see what is really relevant. It's not about rhetorical flourishes or sounding very eloquent but about following a linear path, ”he explains. Something similar to what you try to do in your novels? “In books you also have to discriminate. I could have followed my characters in any mundane conversation but it's about seeing what details are what help them understand them. It's hard because I love my characters and I always find them interesting, so I have to be strict. ”

Reflections on art and literature they are present in their plots populated by aspiring writers or performance poets. Marianne in Normal people He analyzes a young man with exquisite taste, however, lacks ethical principles. “I identify with those questions, because what is the point of art? I don't think it has to be moral but it bothers me that it doesn't improve our ethics, ”he replies. The application of moral judgments to the life of creators and by extension to his work is a hot topic, what is his position? “I ask myself those questions, I also create culture and I didn't know that this was going to happen. I didn't think: "Oh, I'm going to behave very well in case one public day." And it's not like it's a monster, I'm just average. I debate whether our moral expectations are different for artists than for our relatives, for example. Is the responsibility different? I find Roland Barthes's essay on the author's death comforting. The creator itself is irrelevant. I am interested in political conversations about a work not about the author, I am not interested if he is alive or dead, if he has been a good or a bad person. ”

Rooney, like his Connell character, feels he has occupied a liminal position. "As a novelist the perfect place is to be at the threshold close enough to observe a world without being in the center," he says. As the protagonist of Normal people, She is also critical of the literary world. “I don't think there is anything intrinsically superior in reading, that idea that those who read are smarter seems alienating to me. Make a class distinction, ”he says. Have writers and literature not lost influence and weight? "They occupy a less central place in the narrative culture but many people read and they recognize me on the street." Do you feel that success has placed it at the center of that literary world? “No, I hardly know that Sally Rooney they talk about, I don't have to be her very often, only now. When I return to the library I will be alone again writing ”. He says goodbye on the way to his desk commenting that he is looking forward to seeing the Salinger exhibition at the Library. The next week does not happen.