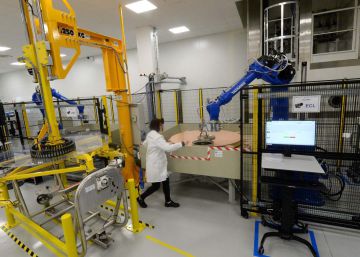 In The capital in the 21st century, the book that launched stardom Thomas Piketty, the French economist strongly defended - and data, many data - a thesis: that capital returns had been growing more than GDP for years and, therefore, more than the labor factor. The result of the cocktail was and is more inequality. Six years later, the Piketty bibliography has been expanded with Capital and ideology - this time, a plea against private property - but the data that are coming to light continue to reaffirm the validity of their force idea: so far this century, wages have grown less than half that of the economy in 22 the richest countries in the world, according to a study published Thursday by US consultant McKinsey. And part-time work, a clearly booming modality and, generally, more precarious than full-time work, explains practically all the growth of accumulated employment.

At the time of greatest prosperity in the history of mankind and to although the occupancy rate of the block is at levels never seen before -even Great recession through, 71% of those of working age are employed—, the labor market emits signals all but hopeful, with a "persistent" stagnation of wages. Between 2000 and 2018, the average salary in this corsage of economies - which covers virtually every country in the OECD, including the United States and much of Western Europe - grew at an annual rate of only 0.7%, compared to a GDP increase of 1.6%. In two countries - Greece and Portugal - salaries decreased (-0.2% in both cases) and in Spain they advanced a nominal minimum 0.2%, largely due to what happened in the pre-crisis period: after the outbreak of the bubble, the devaluation of wages made its own.

The consequences of such a small wage increase have been, fundamentally, two. Almost seven out of 10 households in the block of countries analyzed have seen their income remain stable or decrease in real terms (inflation included). And, in parallel, the relative poverty rate grew: if in the year 2000 11% of the workers entered less than half of the median income (the one that is right in the middle of the distribution), in 2016 that figure already had scaled up to 13%. By then 14 million people were below that threshold in the group of countries analyzed, which account for almost 60% of global GDP.

What happened? The answer is, in its most synthetic version, technology, automation and globalization: the same factors that are changing the very physiognomy of work. "They are", explain the technicians of McKinsey Global Institute, "a double-edged sword: they have brought favorable results at the aggregate level, they have contributed to economic growth and, in some cases, they have created new jobs and opportunities, directly and indirectly benefiting some. But, at the same time, they have contributed to the polarization of work, with much less favorable results for others. " There comes the nuance: the objective of the study, they say, "is not to suggest a reversal in profits and the creation of opportunities derived from technological development but to shed light on the results that are having for some people and motivate the action that prosperity economic be inclusive and shared by all. " No theory of decline, in other words, but much socialization of benefits and not losses.

Being in the group of those who have been favored by this new work environment or in those who have suffered in their own flesh the changes derived from the new technologies has a lot to do with the educational level. And the best unemployed have been the extremes. "The new opportunities have benefited workers with many skills and well paid, and those with less skills and worse salaries, always with respect to the average," add the signatories of the study, entitled The social contract in the 21st century. Those who were in that middle term, both in salary and in abilities, have been the worst unemployed. "They have been squeezed," they point graphically. According to their calculations, the number of employees in this segment has fallen by seven million people in European countries and the US, "although the trend has been slowing down" in recent times. The question is how long.