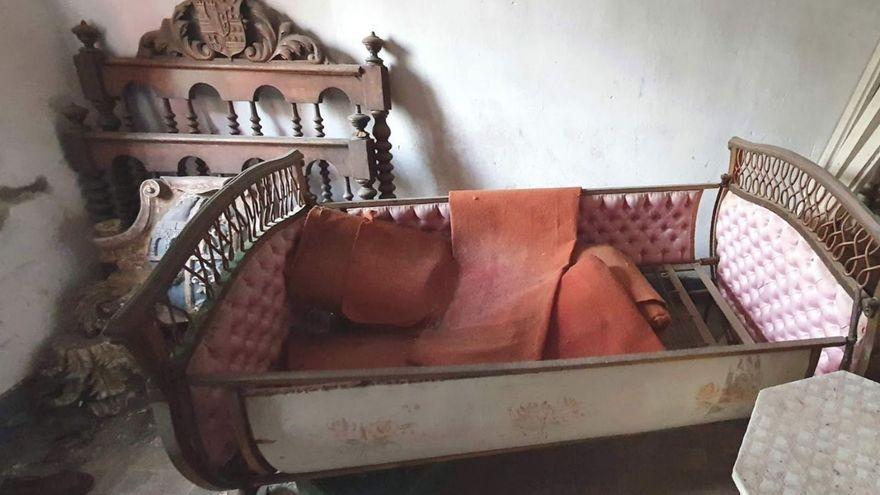 The Court of First Instance number 1 of A Coruña already has in his possession the expert report commissioned by Council of Sada to support your execution incident, in which it defends the public ownership of all movable property of the pazo de Meirás, except those that the grandchildren of the dictator prove that they were incorporated after the death of Francisco Franco and, therefore, not related to the use of As Torres as the official residence of the Head of State nor sold with the pazo in 1938.

The report prepared by the Sadense historian Manuel Pérez Lorenzo, co-author of the book ‘Meirás, un pazo, un caudillo, un espolio’, sheds light on the history of the furniture, furnishings and works of art that the Meirás pazo treasures and that were not the object of claim by the State advocacy, which practically limited its execution incident to claim those elements that it considers real estate by incorporation, that is, that cannot be removed without causing damage to the property (granaries, crosses, stone benches or flowerpots, stairs, balustrades, fountains, friezes and stone ensembles in the garden, among others).

The expert distinguishes in his historical report between the assets prior to the purchase of the Meirás pazo by the Board Pro Pazo del Caudillo on 1938, therefore owned by Emilia Pardo Bazán and their descendants, and those who were incorporated during the dictatorship and that would include gifts to the dictator in his capacity as Head of State, to furniture from other buildings attached to National Heritage or elements that the dictator himself and his wife, Carmen Polo, required in the course of their displacements through Galicia and that were part of the Galician cultural heritage.

In the case of goods from the time of Pardo Bazán, recalls the expert that, as stated in the deed, they were sold with the manor in 1938 (except the library and three tapestries). Regarding those incorporated during the dictatorship, he argues that they were attached to the official summer residence of the dictator “and as such they were treated by the administrations.” They meet, he concludes, the conditions to consider them real estate by destination, placed with the “will to keep them permanently attached” to the property.

The report details and expands the footprint of Emilia Pardo Bazán in Meirás and allows to know with an unprecedented level of detail the connection of certain movable property, about fifty, with the countess, some of them ignored until now. Based on photographs, period reports and fragments of the writer’s work, Perez Lorenzo sheds light on the history of furniture and ornamental elements that were originally part of As Torres and that remained during the dictatorship, with a destiny, at times, very different from the one initially set.

Some of these goods from the time of Pardo Bazán are well known, especially those who remain in the chapel, like the tomb that the writer had carved and in which she wanted to be buried, the baroque altarpiece, the Christ with natural hair, the chairs that were originally part of her office or the wooden kneelers. Also included in the report is the bust of the writer that adorns one of the rooms or the portrait of a woman from the mid-19th century, probably the countess’s aunt. Amalia da Rua. Other assets prior to 1938 have already come to light in recent months, largely thanks to the research work of Manuel Pérez Lorenzo, such as the wooden table on which Pardo Bazán wrote part of his work or some showcases or a library that housed originally the writer’s library and it was moved to the service area.

To this list, the historian expert adds others, such as two wood carvings of praying female figures adorn the lobby; two carved wooden chests, some chairs that were originally in the dining room and that stand as “the only identified vestige of that room at the time of the writer”; two wooden armchairs with two matching chairs, a sofa and two armchairs; four carved wooden beds with shield and county crown usually presented in objects linked to the county of Pardo Bazán or two wooden tables are other objects that appear in the list.

A section that draws especially attention is the one that the historian expert dedicates to the elements deposited haphazardly in the old Meirás farm, the original residence of the Pardo Bazán family, converted into a service area after the construction of As Torres. As LA OPINIÓN advanced, in this historic building, which housed garages and offices during the dictatorship, goods are stored from the time of Pardo Bazán, the dictatorship and later, some of them partially burned, probably from the 1978 fire. Perez Lorenzo reveals in his report that, among the deposited items, there is a wooden bed with the ducal coat of arms from Pardo Bazán’s times, polychrome pieces with heraldic symbols from that stage, iron armor that adorned the stairs before the dictatorship or even part of the bookstore that originally housed the writer’s library, whitewashed and stripped of the upper module to store tools. There are also sections of an ornamental iron closure probably from the 19th century similar to those located in the gardens of the Farm, among others. Pérez Lorenzo also details the existence of documents, many from the time of the dictatorship, and a very deteriorated access diploma to the Royal Galician Academy.

The historian clarifies that the listed assets from the time of Pardo Bazán others can be added that seem to correspond but they should be the object of a more detailed study.

The expert report lists more than a hundred properties located inside the Meirás pazo or in the Farm after 1938 and that considers goods by destination linked to the use of the pazo as the official residence of the dictator. These are furniture, objects and works of art that are part of dependencies such as lounges, dining rooms or offices “closely linked to the public uses of the premises”, where state banquets, official receptions, ministerial conferences were held, highlights the expert , which affects that part of this furniture came from other buildings assigned to National Heritage, such as those revealed by a report from this state body.

The expert concludes that all assets must remain in Meirás and highlights the value of those of Pardo Bazán, sold with the pazo, for their “Didactic and museum potential” and his interest in “approaching the study of his biography”. It defends that those incorporated by the dictatorship are real estate by destination, linked to its use as an official residence and placed with a “vocation of permanence.” His transfer, he warns, would mean “a significant decrease in the artistic and aesthetic value and, above all, in the historical and cultural value of a complex that was declared an Asset of Cultural Interest.”

The view that will determine the future of the assets of the pazo de Meirás will be held on January 13 and 14. The Government has already advanced that, in addition to defending its incident, the State Advocacy will also adhere to the one presented by the Council of Sada.