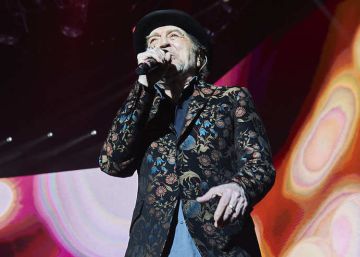 The artist Joaquín Sabina continues to be admitted to the Intensive Care Unit (ICU) of the Ruber Internacional hospital in Madrid, after have been operated on Thursday because of an “intracranial hematoma”, after the fall he suffered during a concert at the Madrid WiZink Center, according to the part issued on Thursday by the center. His recovery is “very slow,” his representative, José Navarro, Berry “It is stable, although its recovery will be very slow. Much slower than people think. It has a history and an age [71 años] that force us to be cautious and Joaquín is calm, “Berry said. Hospital sources have added that Sabina” has had a good night and is feeling better. “Today Friday will be the last part and Sabina will stay one more day in the center , a friend of Sabina has told the media at the hospital door.

Among the friends who have approached these hours to see the singer is the writer Benjamín Prado, who visited Sabina on Thursday. Prado told La Sexta that the artist’s first reaction after the operation was “order a cigarette.” Prado also said that the musician would have liked to continue his performance but the doctors explained that he was not “in a position to continue” and that his desire was because he was in “a state of euphoria of who is before 15,000 people acting “.

Berry He assured yesterday that the operation had been “a success” but that “in this type of circumstances everything is very changing and we must wait for the next 48 hours.” According to the medical report, Sabina was admitted to this hospital on Wednesday, February 13, “after having suffered an accidental fall.” After the operation it was “stable.” “The patient has left shoulder trauma, thoracic and craniocerebral. He has undergone surgery for evacuation of intracranial hematoma in the right hemisphere,” said the report released yesterday by the hospital at the request of the family. The musician was already admitted to the International Ruber in 2001 for a stroke.

Sabina was hospitalized last Wednesday, after, while offering a concert at the WiZink Center in Madrid, he suffered a “fortuitous” fall when he was on stage, according to the organization. At half an hour of recital, and as he began to present Mediterranean, the singer did not realize that he was on the edge of the boards and fell into the security pit between the stage and the front rows of the audience. The show was stopped for 20 minutes, while the medical assistants made the first examinations. Then, the artist returned to the public, sitting in a wheelchair pushed by Joan Manuel Serrat, and promised his followers that he would return with him on May 22 to the same compound. “These things only happen to me in Madrid,” he said, referring to two other accidents that He has suffered at the Wizink Center in recent years. He added: “I have taken a very strong blow that hurts a lot. With all the pain in my heart we go to the hospital, because my shoulder is very, very, very, very sore. ”

His two previous mishaps at the WiZink Center date back to 2014 and 2018. On December 13, 2014, Sabina shortened his concert, affected by a panic attack or, in his words, a “vahido” he had suffered before starting the acting, as revealed later. And in June 2018 he left again a Show in the same place in Madrid, after being “totally mute”, as explained by his friend and collaborator Pancho Varona from the stage. The doctors detected “acute dysphonia as a result of a viral process” and recommended 30 days off, hence canceling the last four performances of the tour I deny everything. That same year the musician had already suspended two concerts in Mexico, in February, for a blow to one eye after a fall; and he was hospitalized in April for an “acute venous thrombosis” in one leg, for which he also canceled a performance in A Coruña.