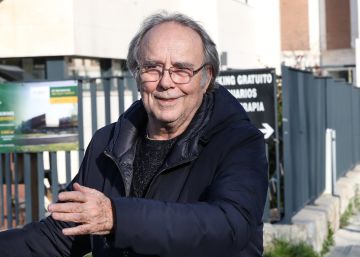 Joaquin Sabina He has left this Monday the Intensive Care Unit (ICU) of the Ruber International Hospital in Madrid, where he continues his recovery after the serious fall suffered last Wednesday during a concert with Joan Manuel Serrat in Madrid, as confirmed by the agency Efe the representative of the artist, José Navarro, known as Berry. This has also advanced that “there will be” no more medical parts by the artist’s family regarding its evolution. The singer and songwriter was operated last Thursday for an intracranial hematoma.

This past Sunday, Berry confirmed that the health status of his represented evolved “in the expected line.” “Everything is going correctly,” he said. During the concert offered on February 12 at the WiZink Center in Madrid – the former Sports Palace – Sabina fell into the pit from the stage, at an approximate height of 1.70 meters, and suffering from severe pain in The shoulder had to interrupt and postpone its performance.

After the relevant examinations, he was diagnosed as having a “left, thoracic and craniocerebral shoulder trauma”, as well as a “small clot” which was operated without complications the next morning. Already then it was noted that the artist would spend at least 48 hours in observation for his medical history and the various conditions suffered during these years, especially since the stroke he suffered in 2001.

Wednesday’s fall at the WiZink Center arrived at half an hour of recital and while Sabina began to present Mediterranean, one of Serrat’s best known themes. The show was stopped for 20 minutes, while the medical assistants made the first examinations. After, the artist returned to the public, sitting in a wheelchair pushed by Serrat, and promised the 12,000 followers that he would return with him on May 22 to the same compound. “These things only happen to me in Madrid,” he said, referring to two other accidents that suffered at the Wizink Center in recent years.

His previous two mishaps at the WiZink Center date back to 2014 and 2018. On December 13, six years ago Sabina shortened his concert, affected by a panic attack or, in his words, a “vahido” he had suffered before starting the performance, as revealed later. And in June 2018 he left the same Madrid venue again after being “totally mute”, as his friend and collaborator Pancho Varona explained from the stage.

The concert last Wednesday in Madrid was the fourth and last of those planned in the capital during the tour There are no two without three, all with tickets sold out well in advance. The three previous performances went normally, although the one of January 20 began 15 minutes late and between apologies because the video with which the show begins – and in which Serrat and Sabina appear characterized as aviators – stopped and restarted a couple of times .