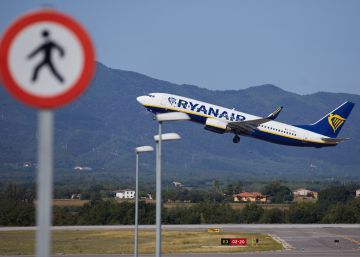 Ryanair Keep threatening your workforce. On February 12 he sent a letter to the workers of the bases that he has throughout the world and, arguing that the delays in the deliveries of the Boeing 737 MAXHe warned them that they should reduce their fleet by nine bases. Among these are those of Madrid and Girona, from where they would withdraw a plane in each of them, which would entail reducing some routes and could lead to layoffs.

However, the airline gives its employees an option to avoid staff reduction. In the letter, he “invites” them to accept a reduction in working hours during the summer season or to request voluntary leave. The deadline for each worker to communicate their decision to the company expires this Friday. Depending on the response given by the workers, the letter states, the company will make the decisions it deems appropriate.

The plans announced by Ryanair, which affect both cabin crew and pilots, go through reducing ten planes from nine European airports. In addition to the two Spaniards, two planes would be withdrawn in Stansted (London) and one in Athens (Greece), Dublin (Ireland), Bucharest (Romania) or Gdansk (Poland). From Girona-Costa Brava airport, USO spokeswoman Lídia Arasanz recalls that the majority of the workforce already accepted at the end of 2019 a 25% reduction of the day and went from fixed contracts to discontinuous fixed ones to avoid closing the base.

The union representative sees “unsustainable” further reductions. At Ryanair base in Vilobí d’Onyar (Girona) a plane sleeps in the winter season and until last year there were five in summer. However, once the cuts are made, the airline has not yet ruled on how many there will be in summer. Aransaz affirms that the excuse of the delay of the MAX to reduce airplanes of these nine bases “is not real”, considering that recently it has added one to the base of Santiago de Compostela and three more to that of Vienna (Austria).

From the Sepla pilot union they sent a letter last day 17 asking for more specificity to the low cost company. They have not had an answer. Nor do they believe that the “labor oversupply” argument wielded by the Irish airline is real. The union notes that Buzz and Malta Air, subsidiaries of Ryanair, are offering jobs to both pilots and cabin and ground personnel.

“It is curious that Ryanair must reduce airplanes while increasing them in the subsidiaries, companies that do not respect local legislation, in which there are no unions and where 80% of the pilots are false autonomous, exactly as it was in Ryanair until with the arrival of the unions two and a half years ago the situation was reversed, ”they say from Sepla.

This new threat comes just a few days before the trial for the employment regulation file (ERE) that led to the collective dismissal of 224 workers for the reduction of bases in Spain. In Girona, 14 employees entered the ERE and another 120 signed the controversial day reduction contract. The unions request the annulment of the ERE and the reinstatement of the employees.