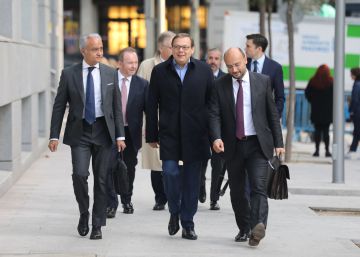 One of the most powerful Russian oligarchs, Mikhail Fridman, investigated for his alleged responsibility in the fall of the Spanish technology group Zed To acquire it at a low price, he has denied his participation in the events. According to legal sources, the Prosecutor's Office has assured that it will continue with the investigation. The tycoon, presented by Forbes as the richest man in London, was cited by the investigating judge, Manuel García-Castellón, as investigated for business corruption, market abuse, punishable insolvency and unfair administration.

Fridman's defense, which he has declared in Russian with a translator, has been based on the fact that he had no decision-making capacity in Zed So his relationship with the want was void. The company was run by Javier Pérez-Dolset, who is the one who accuses Fridman.

According to a statement from the Mikhail Fridman company, which Dia has recently acquired, the defendant "has categorically denied the allegations made against him regarding Zed or his insolvency" before the Central Court of Instruction No. 6 from Madrid. Fridman has said that he "has not met, led or instructed or participated in an illegal siege plan to buy Zed" and that his companies "never made a purchase offer for Zed."

He has argued that "as the public records of the Amsterdam Court of Appeal demonstrate, Zed's problems have arisen from what is fundamentally (and simply) a dispute between Spanish and Russian Zed shareholders."

Fridman has testified in this case where "there are at least 19 other people and 16 entities that are also being investigated." According to his lawyers, the Russian magnate has regretted that his statement has been adopted "without first citing other people who are directly related to the facts and based on inconsistent evidence and some of them based on false and manipulated evidence provided to the UDEF by Pérez-Dolset, responsible for the improper management of Zed +, as determined by the Commercial Chamber of the Court of Appeals of Amsterdam, and who is accused of insolvency, money laundering, unfair administration and falsification of commercial documents in Spain".

Through its Luxembourg-based LetterOne fund, Fridman controls telecommunications, healthcare, distribution, hydrocarbons or finance companies. In fact, he is the founder of the largest Russian private bank, Alfa Bank. The businessman, considered close to the Kremlin, carried out, according to the prosecution, "a typical technique on the part of the Russian mafia": RAID, that is, an attack to illegally appropriate a company, reports AFP.

"There is a technique that consists of arriving with some kalashnikov to the business. The thing was then perfected, being a violent issue became an economic or legal issue: suffocate the administration of a company, ending in insolvency," he explains to the AFP the prosecutor
in charge of the case, José Grinda.

Founded in 1998 in Madrid, the Zed technology group developed and commercialized value-added services for mobile phone operators. Some had great fortune, such as premium SMS services or the Commandos video game. Fridman became at the same time one of its shareholders and one of its main creditors.

As of 2014, the mobile telephone operator Vimpelcom, controlled by Fridman and which already had problems with the US justice, terminated or substantially modified several contracts with a Russian subsidiary of Zed, depriving the Spanish group of significant revenues, according to the prosecution.

The obtaining of these contracts had led Zed to borrow in 140 million euros, part of them provided by a bank controlled by the Russian tycoon. The difficult situation led the Spanish group to declare itself in bankruptcy proceedings in 2016.

A few months later, people close to the Russian tycoon proposed their purchase for 20 million euros, "well below what was their value when they began the paralysis and blocking maneuvers, controlled by Mikhail Fridman."