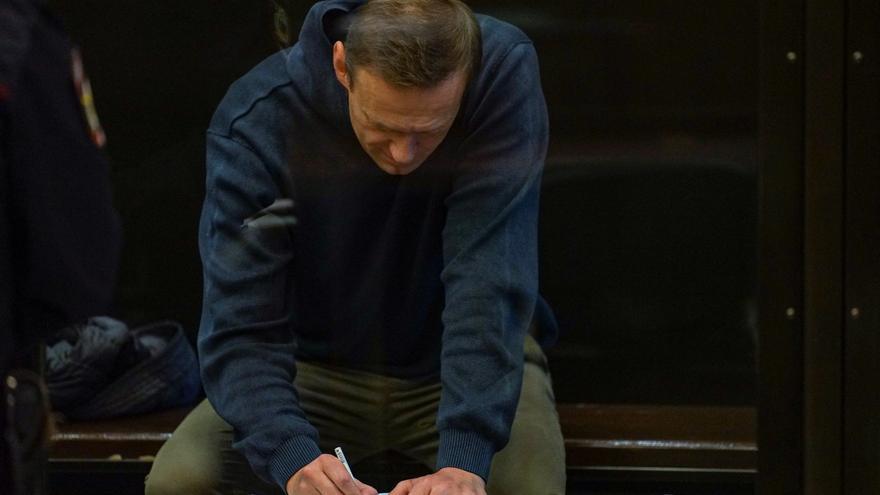 On January 17 this year, Navalni returned from Germany to Moscow and was detained at the airport. The authorities had issued a search and arrest warrant against the opponent in December for failing to appear before the authorities for an old criminal case. In this case from 2014 the European Court of Human Rights (ECHR) accused Russia of violating the rights of Navalni and his brother to a fair trial. I was currently in preventive prison.

More than 230 people have been arrested this Tuesday in the vicinity of the Urban Court of the Russian capital, where there are strict security measures, according to EFE. The Kremlin has rejected all Western criticism of Navalni’s arrest and the disproportionate use of force by the police against protesters in the massive protests on January 23 and 31 in support of the opponent and in which almost 10,000 were arrested. persons.

At the end of 2014, a Moscow court found Alexei Navalni and his brother Oleg guilty of fraud in the field of business activity, as well as money laundering. “The criminal conviction was based on an unpredictable application of criminal law and the process was arbitrary and unfair,” the ECHR declared in its 2017 ruling.

Navalni returned to Russia from Germany after recovering from a poisoning on August 20 that kept him in a coma for several weeks. The Organization for the Prohibition of Chemical Weapons (OPCW), like other national laboratories in Germany, Sweden and France, determined that the opponent had been poisoned. The Siberian hospital that treated him in the first instance, however, said it had found no traces of poison.

On December 14 the research medium Bellingcat publishes an investigation with CNN, Der Spiegel and The Insider which directly targets a team of the Russian intelligence services, FSB, in an operation to kill Navalni. The information cites names and surnames of several agents allegedly involved in the poisoning of the Russian opponent.

Hours before publication, Navalni requested to have the opportunity to calling the agents posing as a senior official from the Russian security services to try to extract a confession. It was important to do it before the publication of their names so that they did not suspect that it was a trap. Navalni used an application to hide the phone number and chose as a cover an FSB line that, according to information from Bellingcat, had been in contact with the agents on several occasions.

Navalni used this strategy with two agents. The first attempt was unsuccessful and the interlocutor said before hanging up: “I know exactly who you are”, according to Bellingcat, who was present during the calls. The second, Konstantin Kudryavtsev, fell into the trap and they talked for 49 minutes.

“Why did the operation fail?” Asks Navalni. “Well, they landed and the situation developed in a way that … was not in our favor, I think. If I had flown for a longer time and had not landed abruptly, maybe everything would have been different. I mean, if it hadn’t been because of the quick work of the doctors, the paramedics on the landing strip, etc. “, answers the agent.

“You miscalculated the dose or the odds, why?” Navalni insists. “Well I can’t say why. As I understand it, we added a little more than necessary so …”, Kudryavtsev responds. The agent acknowledges that he was in Omsk [donde fue ingresado Navalni tras el aterrizaje de emergencia] on August 25 and that his mission was to clean possible evidence

“And what garment did you focus on? Which garment had the highest risk factor?” Asks Navalni. “The underpants,” he replies.